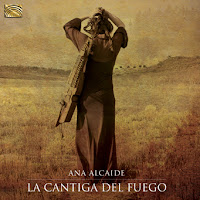 I heard about the Spanish traditional musician Ana Alcaide last December. Alcaide interests me because the musician/culture preserver/composer/performer went from playing her nyckelharpa (a traditional Swedish keyed-fiddle) on the streets of Toledo, to producing the album La Cantiga Del Fuego which landed on the top of the World Music Chart in Europe. Alcaide’s journey has lasted over a decade thus far, and which also includes higher education in music conservatories in Sweden and Spain, studies in biology, and a fascination with both musical traditions of the Sephardic Jews of Spain and North Africa, as well as, the nyckelharpa.  If you want to know how all of that fits together, then you must listen to La Cantiga Del Fuego, an album filled with stories about love, tragic loss, exile and hope, brimming with the sounds of exotic European and Middle Eastern instruments.


Journalists have compared Alcaide to Enya and Loreena McKennitt, and certainly, I can hear those comparisons.  However, I would add Arianna Savall, a Catalan harpist/vocalist to this list.  Alcaide sings in a Mediterranean voice and you can hear Southern Spain dripping from her lips, but her musical approach includes international instruments in which she moulds a soundscape that compares to an exotic tapestry.  You’ll hear oud and santur, along with Jewish clarinet, accordion, Spanish bagpipes, electric bass, percussion, and I swear I heard didgeridoo on one of the songs, Queen Ester, even though it isn’t listed in the credits.  This song sounds like it came straight off a Gjallarhorn album (a Nordic band that plays traditional instruments and songs from Sweden and Finland).


The songs all flow smoothly into each other.  However, if you listen closely, preferably through headphones, you will hear intricate rhythms, delicate interludes, and exquisite vocal phrasing.  From haunting ballads to the wedding song, Ay que Casas! which features Spanish bagpipes and a Bulgarian 9/8 rhythm, we can see why European music audiences sent this CD to the top of the World Music Chart.  This leaves me wondering what other types of music we would find on Toledo's streets.


www.arcmusic.co.uk
Posted by Moon Child at 1:09 PM No comments:

In review--From Senegal to Haiti 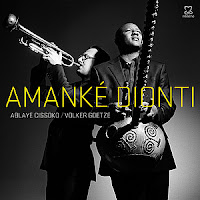 The world music duo Ablaye Cissoko, a griot kora player from Senegal and Volker Goetze, a trumpeter originally from Germany returned with another masterful recording, Amanké Dionti.  After the duo’s critically-acclaimed Sira (2008), which married a trumpet’s clear tones with the delicacy of a kora (West African harp) and Cissoko’s Senegalese vocals, transformed both world music and jazz.  Not long after, Sira came into the world, another Euro-African duo, Vincent Segal (France) and Ballaké Sissoko (Mali) wed cello with the kora (this duo has an album out in February 2013).


When I listen to Amanké Dionti I wonder what Miles Davis or John Coltrane would have thought of the musical marriage.  The recording fits easily and comfortably into jazz and world music.  I would even squeeze it into world classical and if a new ager didn’t reflect on the socio-political messages of the modern griot songs, the relaxing tones of the trumpet and the kora would definitely appeal to this group too.  The overall sound exudes tranquility and beauty.  I realize that it’s almost a cliché to call the music here breathtaking, but it is, in the same way that a magical sunset causes us to pause and gape at its beauty.  This is the type of music that fills every cell of the body with health and vitality.


Cissoko’s melancholic vocals float over the kora’s arpeggios and Goetze ghostly trumpet on Kana Maloundi.  In contrast, the titular track sets a different mood, of hope that glimmers with the kora’s shimmery tones and warm honeyed vocals.  Haiti features a muted trumpet playing in tandem with the kora and this track that was originally produced for the film Griot by Volker Goetze is my favorite on this recording.  In fact, Cissoko’s soaring vocals give me chills.


I believe that this CD was actually mailed to me last year, but was lost on route.  Then when I read other journalists’ top ten list on the World Music Central site, I felt like reviewing it.  After all, I was one of those music journalists who fell in love with Sira in 2008.


http://www.motema.com
Posted by Moon Child at 9:16 AM No comments: