In Conversation--Taking it to the Streets 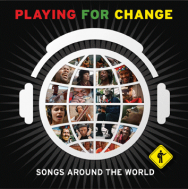 When it comes to street musicians, I have a fond memory of an African-American vocalist who sang soul tunes on University Avenue in Seattle. He accompanied his vocals by jingling a jar of coins and he always brought a smile to my face, even on the gloomiest days.

Also in Seattle other street musician stars such as the Andean ensemble with their pan flutes and bombo drums performing at the Northwest Folklife Festival, where they drew crowds and downtown Seattle, as well as, an extraordinary Native American violinist that performed in Pike’s Place Market, etched themselves in my memory.


So when I turned on the radio and to an NPR show, On Point, not too long ago, and heard an interview with Grammy award-winning producer/recording engineer Mark Johnson who chatted about his project, Playing for Change, I experienced goose bumps. My heart went out to Johnson who experienced an epiphany in a New York City subway when he encountered two monks performing to a large crowd. Eventually, Johnson took his recording equipment to the street. Filmmaker Jonathan Walls brought his video equipment along and a journey that started in Santa Monica with the late street musician, Roger Ridley singing Stand by Me, and eventually zipped around the world, landing in India, South Africa, the Congo, Israel, Northern Ireland, New Orleans, Italy, Spain, France and other locations.

Street musicians to famous musicians like U’2’s Bono and Ghanaian reggae luminary Rocky Duwani and Keb’ Mo’ bring their sitars, guitars, drums, harmonicas, violins, voices and other instruments to the mix. Zuni and Zulu tribal members join with Classical Indian musicians, Congolese percussionist and global choirs. But how best to describe Playing for Change, a peace project that almost defies description, until we invent new adjectives reflective for an era of sharing and cooperation?

The multifaceted project includes documentaries, YouTube videos, and a CD/DVD featuring these world musicians. The documentary Playing for Change—Peace Through Music aired on PBS in August. Jonathan Walls’ beautifully edited world music collage dazzles the eyes and fills the heart with peace. From the angelic Irish choir singer that begins and ends Love Rescue Me to the rousing Bob Marley’s War/No More Trouble and One Love, the fun-loving Don’t Worry, composed by France’s Pierre Minetti to the infamous Stand by Me that features Ridley and New Orleans street musician Grandpa Elliott and Clarence Bekker from the Netherlands, an abundance of peace-loving music emerges.


And if that is not enough, a foundation has been formed to raise money for music projects in impoverished regions of the world and a Playing for Change band will tour the U.S. this fall.
I caught up with filmmaker Jonathan Walls via e-mail to learn more about this fascinating project. I encourage you to visit http://www.playingforchange.com/ to get the full scoop.


WME: People walk by street musicians everyday and some ignore the brilliant musicians in subways around the world while others stop to enjoy the musical offerings of buskers. Some famous musicians such as the jazz vocalist Madeleine Peyroux and the lesser known Canadian blues musician Harry Manx started out as street musicians. Other buskers prefer performing on streets rather than entering the recording industry.


Did the concept for Playing for Change start with the musical monks in the NYC subway or Roger Ridley in Santa Monica?


Jonathan Walls: The entire Playing for Change film series and movement was inspired by the musical monks in NYC. Mark Johnson was on his way to work and experienced these monks and the effect they had on the people passing by. Then, Playing for Change: A Cinematic Discovery of Street Music was made. Roger Ridley was the inspiration for the film, Playing for Change: Peace Through Music.

JW: I would say 25% of the musicians in the film are actual street musicians, mostly those in New Orleans and Barcelona, Spain. Playing for Change: Peace Through Music is a journey that demonstrates the power music has to unite humanity and we wanted to represent all kinds of musicians from around the world, moving beyond only having street musicians. Our first film was more of an exploration of the lives and freedom street musicians have, but Peace Through Music was more of an exploration of the essence and power music has to unite.

WME: Who chose the songs for the project? Did those songs originate with a certain street musician that got the ball rolling? Or were the musicians asked to perform certain internationally recognized songs, such as Stand by Me and Bob Marley’s classics? (By the way Bob Marley does cross many boundaries even reaching nomadic Tuareg musicians in the Sahara—that to me is amazingly powerful).

JW: Mark Johnson and Enzo Buono chose the songs that we used as our songs around the world except the song, Don’t Worry which was an original written by a street musician in Barcelona. And the individual performances and their songs were chosen by the individual or band themselves. After the song choice was made, such as Stand By Me or One Love, we would choose a musician to start the song and then build upon that with other musicians as we traveled. For example, Roger Ridley started Stand By Me by singing and playing the guitar. We then traveled to New Orleans and added Grandpa Elliott and Roberto Luti and so on….

WME: I think the documentary Playing for Change (Peace Through Music) brings us a powerful message because you and Mark Johnson reveal some tense situations around the world in which music played a peaceful role, such as the aftermath of Hurricane Katrina in New Orleans (whose heart doesn’t that reach?), post Apartheid South Africa (which is not as peaceful and prosperous as some people would like to think), Northern Ireland, Israel/Palestine, etc… So how was the filming schedule planned? Did it flow organically or were the hotspots in the world discussed as possible destinations to make a point about the power of music?

JW: The destinations were both a mix of being pre-planned and thought out and spontaneous. The locations you mentioned above such as South Africa, New Orleans and Israel were definitely pre-planned. Music is an integral part of these locations and each has experienced an event or set of events that caused turmoil and despair and used music as a way to persevere through it.

WME: What was your favorite destination and why?


JW: Dharamsala, India was my favorite location. It is the most northern part of India near the Himalaya Mountain range and it’s the home of the Dalai Lama and many Tibetans in exile. I enjoyed the humble spirit it has and the peaceful energy it exudes. There is something about being near mountains that I’ve always been drawn too throughout my life…not sure why that is.

WME: Did you run into any trouble with government officials or immigrations in any of the countries that you visited?


JW: No, we never did run into any trouble with government officials. We only traveled with 4 to 5 people and our equipment was minimal, so we were never questioned by immigration upon entry.

WME: Where did you and the small crew feel most welcomed? And what destination most shocked or surprised you, musically and socially?

JW: I don’t think there was one location over another that we felt more welcomed. We were welcomed beautifully everywhere we went and had the most gracious local guides in every location. I was pretty shocked in South Africa at both the music and its society. I didn’t know the complete history of apartheid and to be able to discuss and witness first-hand, its effect, was overwhelming and insightful. Plus, I was inspired at the power music had to overcome that horrible time for South Africans…their choral music swept me away, I really fell in love with it.


WME: Playing for Change in a short span of a few years started with video and music recording projects and has branched out to include a foundation and a PBS special, where do you go from here?

JW: Well, Playing for Change is a movement and a concept that will continue to evolve in all mediums. Right now we are preparing for the film’s release on DVD and our bands’ fall tour. A major part of Playing for Change now is our band; they are a huge force representing our project around the country and hopefully around the world in the future. We also have the Playing for Change Foundation which has just completed its’ first music school in Guguletu, South Africa and has recently broke ground on another school in Ghana as well as Tintale, Nepal.


WME: Final question. Has your musical taste and worldview transformed after completing the films? And do you believe that world peace is possible now that you have witnessed a real hunger worldwide for peace, cooperation, sharing and celebration through music?

JW: My musical taste hasn’t necessarily changed, but has grown. I experienced many new types of music that I never would have explored otherwise and am so grateful for that. It’s a true and unbelievable blessing to have been a part of Playing for Change and to explore different cultures and music from around the world. And I do believe world peace is possible, but also realize that it will take an enormous effort from us all. And in some circumstances it will take a difficult paradigm shift, but the power of thought is tremendous and if we all understand each other’s differences and accept that beauty, world peace has a chance.

Posted by Moon Child at 9:15 AM No comments: