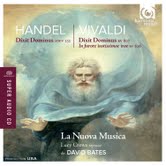 One of the most popular Christian music settings, Dixit Dominus (music composition for Psalms 109, or 110 in the Protestant Bible), offers baroque era vocalists a workout.  On La Nuova Musica’s recording, Dixit Dominus, conducted by David Bates, the musicians (instrumentalists and vocalists) perform Vivaldi’s third setting of the Psalms 109/110 in D major and Handel’s sober setting in G minor (going against the convention) and sandwiched between those two gems, soprano Lucy Crowe performs the 4 movements of Vivaldi’s In Furore iustissimae irae (my favorite performance on the recording).

A relatively young early music choir/orchestra, La Nuova Musica has received critical acclaim and its star rose quickly into the firmament of international early music ensembles.  Certainly, this polished recording offers crystalline vocals, passionate strings and regal trumpets arranged in such a way that even a non-religious listeners hears the stirrings of God in it.  Vivaldi’s setting RV807 (only discovered in 2005), leaps to life the moment you push play on the disc.  The alternating chorus with soloists (usually singing on the high end) further emphasizes the heart and soul of this composition.  Gloria Patri, et Filio features an exquisite duet of sopranos that could leave a listener breathless from its musical fragrance.

While RV 807 ignites religious passions through its liveliness, Lucy Crowe’s vocals on In Furore Iustissimae irae nearly shatter hearts.  Only the Alleluia rises above melancholy as it coloratura vocals impress.  Handel’s setting of Dixit Dominus feels urgent and as the liner notes describe it, “Handel’s deity is more vengeful than majestic.”  No one would ever describe this setting as light or lively and I felt a mood shift happening between Vivaldi’s and Handel’s versions.  This reminds us that composers have a variety of interpretations for the same text and I would guess that their national temperament, background and experience plays a role in the palette the composer chooses to display.  For instance, Vivaldi represented the Italian style and Handel represented something heavier from northern Europe (not that Handel didn’t compose lighter fare).

The countertenor Christopher Lowrey shines on Handel’s setting, his vocals soaring way above the rafters.  Anna Dennis delivers breathtaking vocals on Tecum principium in die virguitis and we can feel her emotions coming through.  Also worth noting, Vivaldi sets the Psalms into 11 sections, including the final AMEN while Handel condenses the Psalms to 8 sections/passages and he includes a chorus, instead of sopranos on Gloria Patri, et Filio.  He includes soprano I, II, and the chorus on De torrente in via bibet.

Both Vivaldi and Handel’s settings for the Psalms offer vocalists colorful and challenging material, but I prefer Vivaldi’s lively approach to Handel’s more vengeful God.  In any case, La Nuova Musica offers us fodder for contrast and comparison of two of the world’s most loved early music composers and their interpretation of Biblical text.

http://www.harmoniamundi.com
Posted by Moon Child at 3:06 PM No comments:

I need paper envelopes for CDs so that I can recycle the plastic jewel boxes (which I don't like).  I need 50 to 100 CD envelopes.  Please contact me if you would like to donate envelopes.  Thank you.

wholemusicexp at gmail.com
Posted by Moon Child at 10:04 AM No comments: