In the news---Music, hearing, and aging

I found a short news clip, "Striking the Right Note" in Taste For Life (November 2011).  According to a research study conducted at Baycrest Centre for Geriatric Care (9-13-11), "Lifelong musicians experience fewer age-related hearing problems than non-musicians."

However, if you wish to check out this intriguing news bite, go to http://www.tasteforlife.com

Also in this publication, "Listening to music can ease cancer patients' anxiety and reduce their pain..."
Posted by Moon Child at 10:26 AM No comments: 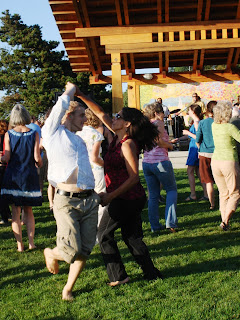 
So often with sound healing or the concept of healing with music, an assumption that healing music must relax us rears its head.  Healing comes in many guises and each of us needs different types of healing.  We might need to boost our immune system, or boost our energy/vitality, we might need music to help us focus better or to relax from a stressful day.

This brings up one of my favorite concepts and that is purposeful music.  As we grow more conscious of how music affects our soul-mind-body, we build a music tool kit with multiple purposes.  Often I suffer from headaches and so I choose relaxing music, even drones without melody or audio sound scapes.  Some times I could use a good sound healing session with crystal bowls and tuning forks and other times I need to dance to West African drums, Brazilian samba, or need to get my body moving to something hot and Latin.

The purposeful music concept visited me twice within the last week.  I've dealt with huge amounts of stress since relocating such as job hunting, sending literary submssions off, and getting situation in a new environment.  So there are times when I just need to get this body moving and release stress or I need to recalibrate.  The other day when I walked into Wise Awakenings (a sound healing store near the YMCA), a woman was trying out crystal bowls.  The vibration from a set of bowls sent my frequency through the roof.  This took place after a reiki session so I was feeling pretty good at the time.


Later the same week, I felt sluggish.  A friend asked me to give a short lecture about salsa music for her dance class.  Although I had some trouble getting to the location, by the time I heard Latin music streaming from the classroom, I felt good, and that sluggish feeling completely disappeared.  This music included Cuban son, Dominican Republican merenge, and mambo.  The instructor (my friend) mentioned that people who dance to salsa and other Latin music (because of the swaying of hips and movement in the lower body) don't suffer from lower back problems.  But Latin music does more than relieve lower back pain.  This type of music with roots in Africa and Spain, forces the body to move.  And while the body is moving the immune system gains strength and depression lifts.  This is because Latin music spreads joy and feels celebratory.

I'm not saying that Latin music never expresses melancholy or suffering, because it does in the form of fados, flamenco, boleros, rancheras, etc, but this type of music creates avenues for catharsis.  So say you're feeling depressed, then listen to flamenco or a bolero.  Then as you move through that depression, gradually raise your frequency by choosing slighly more joyful music until you find yourself dancing to salsa or a merenge.


If you feel sluggish, like I did, start with slower music and work your way up to the faster tempo and start with simple rhythms and work your way to the more complex poly rhythms. In short, I repeat that healing with music includes many rhythms, genres, textures, timbres, tones, and moods.  As you grow more conscious by keeping track of how music affects you personally at various times and seasons in your life, you will consciously choose the right music for your situation just like you would choose the right foods for your body type.

In the future, I'll post an essay on keeping a music journal.  But for now, enjoy the musical ride.  And support global music.
Posted by Moon Child at 8:34 AM No comments: