Traditions Series--Vishtèn Plays the Music of the Red Earth 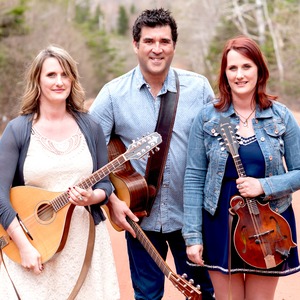 Hailing from Prince Edward Island and the Magdalene Islands (off Quebec's coast), twin sisters Pastelle and Emmanuelle LeBlanc along with Pascal Miousse, better known as
Vishtèn cook up a musical stew of Acadian, Cajun, Quebecois, and Celtic influences that get the feet tapping.

The three muli-instrumentalists perform double, triple, and even quadruple duty on their latest album, Terre Rouge named after the red earth of Canada's Maritime islands. The album features love songs with surprisingly happy conclusions, as well as, stories about blizzards, comical tales, and homages to the islands. Album release date is July 10, 2015 in the US.

Whole Music Experience: When and how did Vishtèn form? I read that Pascal is from Magdalen Islands and you’re from Prince Edward Island? (Your trio is the second band I’ve heard from PEI--Gadelle was the first).

Pastelle LeBlanc: Emmanuelle (LeBlanc), and I founded Vishtèn in 2000 with a fiddler from PEI. We enjoyed playing music together and decided to apply for a showcase and got accepted. The showcase was presented to many international buyers and was a huge hit! We hadn’t really thought of music as a career but it took off then and we got really busy. We played together for a few years, along with a guitar player, and then the fiddler decided the road life wasn’t for her, so we were in search of a new fiddler.

We met Pascal Miousse through mutual friends and immediately fell in love with his playing. We jammed and hung out one weekend and asked him if he would join the band. As he was finishing up a touring project, he said yes - the timing was perfect. Since then, Vishtèn has had 5 members, and then 4 members, and now a trio for the past 5 years.

There are lots of musical connections between Prince Edward Island and the Magdalen Island and both Acadian styles compliment each other very well.

(Yes, Gadelle are friends from the same area as we are from, and Helen was our step-dancing teacher for many years growing up)

WME:  It says in the press notes that all three of you are multi-instrumentalists so who plays which instruments? And what were the ages you first began playing traditional music?

Pascal started playing fiddle tunes when he was 4 years old. His father’s a guitar player who accompanies numerous Magdalen Islands fiddlers and he encouraged Pascal to play at an early age. He later picked up the guitar and mandolin.

Emmanuelle and I started step dancing when we were about 5 years old. We started off imitating our mother, a great step dancer, then joined the community dance classes and soon started performing at local events. We both played a bit of piano growing up and learned the fundamentals of accompanying traditional music by listening and watching the musicians that would drop by the house to play a tune.

We come from a community where house parties are common and consider ourselves lucky to have been exposed to so much great traditional music.

Emmanuelle picked up the whistle and bodhran in her late teens and the octave mandolin a few years ago.

I started playing accordion and mandolin around the time the band started, when I was about 20 years old.

WME: Is the track Corandina” the only song from the Magdalen Islands that appears on Terre Rouge? It definitely has stronger roots in Quebecois traditional music and less so with the Celtic strain, especially with the call & response vocals and the rhythms even if the fiddle has Celtic strains.

Pastelle: Yes Corandina is the only song on Terre Rouge that comes from the Magdalen Islands archives. The song wasn’t originally a call and answer song, but we adapted it a few years ago.

WME: How big of an influence is Celtic music with the Acadian folk traditions?

Celtic music has a very strong influence on our islands when it comes to the instrumental pieces (reels, jigs, strathspeys, etc). On PEI, Scottish and Irish settlers brought their music and dancing with them. Since French-speaking Acadians are a very small minority (only 5% of the island’s population still speaks French), we’ve been surrounded by these Celtic traditions for a long time and have learned the repertoire.

The Celtic tunes are often times adapted to more of a French style however - Acadian fiddlers will use a shuffle to create a rhythmic effect instead of Celtic ornaments such as cuts, rolls, etc. When it comes to step dancing, there are also a lot of common steps with the Celtic styles, although only in the Acadian traditions would you see sitting down dancing and foot percussion that accompanies the music. The songs come from our French ancestors - lots of different versions in different Acadian communities and households.

On the Magdalen Islands, they have a strong Celtic influence as well, mostly from Cape Breton. Repertoire were learned by tuning in to radio stations from Antigonish and Cape Breton, where people listened to a lot of Scottish players. Most fiddlers on the Magdalene play a repertoire of traditional pieces from Cape Breton, often times hybrid tunes (example : part A of a Scottish tune, but then a made up part B). We’ve heard from fiddlers that they would learn their pieces from the radio programs, but that sometimes the radio would shut out…the fiddler really wanted to play a new reel at the next dance so if he hadn’t caught a tune in it’s entirety, he would make up the rest which is where the hybrid tune comes from.

The Magdalen Islands are part of the province of Québec, but since they are situated in the Maritimes and in proximity with Cape Breton and PEI, the repertoire is Maritime/Celtic influenced rather than traditional music from mainland Quebec.

WME: Where would we hear the Micmac Indian influences?

Pastelle: The name of our band is a song which is part Mi’kmaq, French & English and represents the strong ties between our cultures (the natives helped the Acadians during the deportation). The song is tinged with Mi’kmaq sounds.

WME: The Cajun song Joe Feraille acts as a departure rhythmically and coming from the US, I’m familiar with Cajun music also realizing that the original Cajuns came from Acadia (though you don’t hear much of the Celtic influence with the Cajun songs I’ve heard). Which genres of traditional music most influence your trio?

Pastelle: Cajun music and Acadian music have definitely had different influences based on the geography and different settlers in the area. What we have in common are the songs, which have traveled and evolved but we find some common repertoire for sure.

Cape Breton, Scottish and Irish traditional music was part of the scenery for all of us growing up in our communities, but we soon were listening to many other types of traditional music which have influenced us a lot, like Cajun music, Québecois, Appalachian, Swedish & music from Brittany.

WME: Final question, how do you go about collecting and researching songs for your repertoire? Do you listen to field recordings, meet with old timer master musicians, or swap songs at folk music festivals? I noticed that you do all the above, but I like hearing it in your own words.

Pastelle: We’ve been doing a lot of research for old Acadian songs since the band started and have a collections of field recordings that we work with. It has truly become a passion for us and as we’ve traveled, we realize the importance of celebrating our roots music as not a lot of people out there are doing it. We’ve spent many hours collecting songs at the archives at Université of Moncton, going through hundreds of songs, we’ve had sessions with our local folklorist/historian, we’ve also met a lot of people who have shared collections with us or have even sang songs to us which we then incorporate into our own style.