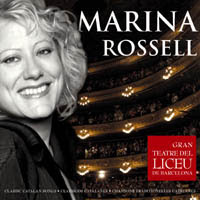 
Catalan/Spanish vocalist and songwriter Marina Rossell marries Lorca-like poetry, with traditional Spanish instruments and heartfelt vocals on this live recording. This delicious collection of songs, (23 in all), combines the taste of the sea, with sensual images and longing. And similar to other international vocalists, Mariana Montalvo, Tania Libertad, Arja and Claudia Bombardella, Rossell's repertoire on Classic Catalan Songs, travels the gamut from cabaret-style to spiritual and national hymns, to love songs that would cause troubadours to blush.

These songs come to us from a September 11, 2008 (a Catalonian holiday), performance at Gran Teatre Del Liceu De Barcelona (Grand Theatre of Licea of Barcelona), and judging from the photographs that pepper the cover and liner notes, this performance was a grand event. The entire theatre with its many tiers was filled to the brim. That alone shows you regional pride of the Catalan people.

I especially enjoyed Rossell's original songs, with poetry that again reminds me of Garcia Lorca's pastoral poetry. Her love poems combine ideas, the earth, the sea, the moon, the night, lovers, longing and departing. And her original songs hold up against traditional Catalan songs, both religious and secular. For someone such as myself, who does not have a vast knowledge of Barcelona and northern Spain in particular, this recording feels educational to me on both a mental and ancestral level.

Although this collection mainly consists of folk songs, ballads and hymns, they feel like lullabies to me. They act as balm for my stressed out body and send my heart into a revelry, helping me to escape the chaos we call modern life. Listening to the songs here, I want to travel backwards in time and feel rooted to the earth. Other listeners might just draw the same conclusion.

Posted by Moon Child at 4:33 PM No comments: