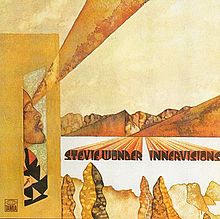 
Ah, Stevie, how did I forget you for so many years? I grew up with Stevie Wonder music surrounding me.  Then when I was in college, I took a dance class and our final performance featured Sir Duke.  However, after I discovered alternative rock, I stopped listening to soul music, and poor Mr. Wonder was relegated to the back closets of my mind.  That was until a few months ago when I heard Sir Duke playing the background at the food coop.  Stevie was back and just in time, since now I decided to include a chapter on soul music for my book-in-progress, Whole Music. Oh, I’m enjoying this.


When Stevie released Innervisions in 1973 I was in grade school, but I heard the gritty socio-commentary Living for the City, the catchy Don’t You Worry “Bout a Thing, and the funky Higher Ground on a pop radio station.  However, at the time I did not recognize Wonder’s musical genius.  I knew nothing about song crafting, ethnic rhythms, or music production.  Now, that I have listened to everything from Mozart, to Aretha Franklin, to field recordings of drumming virtuosos, I feel astounded by the beauty and power of Innervisions.


First, Wonder plays most of the instruments himself, including those salsa piano riffs on Don’t You Worry, his voice swoops and soars like a combination of a West African griot and a gospel singer of the black church.  His songwriting must have turned other musicians’ faces green with envy and these songs run the wide gamut between all-out gospel (Jesus Children of America and listen to that churchy piano at the beginning of Golden Lady), funk (Living for the City), ballads (Visions, Golden Lady, All In Love is Fair), and salsa (Don’t You Worry ‘Bout a Thing).  The musician wonder also provides some cheeky humor such as his little Spanish skit at the beginning of Don’t You Worry and in the text of He’s Misstra Know-It-All, which in itself has a Beatles-esque quality.  I can hear Paul McCartney crooning this song.


It is not often that I sit mesmerized with my finger on the replay button, but I could spend an entire day listening to this single album.  Besides, all the glowing accolades I mentioned above, I feel the changing moods of these songs strongly.  I resonate with the keys on Visions, Golden Lady, and All In Love Is Fair in which Wonder’s vocals grab my heart and nearly yank it out of my chest.  I would need to listen to all Wonder’s albums to know which one has the best vocals, but I imagine this album is at the top of the list.  Wonder goes full-throttle on this flawless album.  He also experimented with the Moog and ARP synthesizers of that era.  And I will say, from a college class learning the ARP synthesizer, that you had to program each sound with patch cords (you did not just push buttons).  Here is just another memory, compliments of Stevie Wonder.


If you haven’t heard this album in decades, dust it off and give it a spin.  Better yet, get the CD version and hit replay.  One last thing, it seems appropriate to review a CD of a Taurus musician when the sun and moon transit through Taurus.

Posted by Moon Child at 5:27 PM No comments:

The Practice--Exploring Your Daily Soundscape 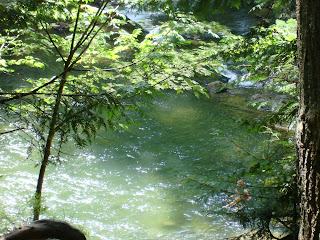 I ask myself what are the chances that I will meet a didgeridoo player, enjoy exposure to crystal singing bowls at a spiritual shop, and encounter someone playing electric guitar on the sidewalk in one afternoon? Yet, one day last week, the sound universe revealed its diversity.  Along with that, I tracked my emotional and physical responses to the diverse encounters.  While I found the frequencies of the singing bowl and the didgeridoo relaxing and uplifting, the electric guitar (performing hard rock) did not appeal to my senses, and in fact, I experienced a fight or flight response.  I chose the flight.

On another day, the sun came out and as I walked through a quaint neighborhood, I heard guitar blues coming over someone speakers, the music poured onto the street and some how, this felt like the right music for the right time and environment.  I bring these scenarios up because the majority of humans walk by musical sounds everyday and experience music in the background with no consciousness or awareness of the effects of this music on their bodies.  They don't realize that music resonates with their cells and rhythms entrain them, sometimes beyond their conscious or in this case, unconscious will.

The person walks away with a migraine and nausea after visiting a large box store with music blaring through the sound system or sits through a movie with the soundtrack blasting out of the theater speakers, without making a connection.  Yet, when I give unsolicited observations and advice about music awareness, people shut their ears at that point.  They're not ready yet to protect their nervous system, brain, and ears for future use.  I hope this changes in the near future.

However, for advance students in music awareness, I encourage you to spend a day observing sounds and music you encounter.  How do these sounds/music affect your overall well being? Do you make a connection between a headache and exposure to sound or do you make a connection between sudden euphoria after exposure to music.  I'm not even talking intentional music, but incidental music that visits you throughout your day.  Pay close attention to these sounds, your exposure to the sounds, and your responses.  Then later, explore those sounds again, if possible, and see if you have the same responses.

By doing this challenging exercise, you develop heightened awareness not only to sound, but to other sensory.  You learn more about your body, your likes and dislikes (since some of us allow others to decide our favorite music for us.  Heard of peer pressure?), and what your body enjoys.  Try this and get back to me with your results.  Leave a comment.
Posted by Moon Child at 8:57 AM No comments:

In review--Groovin' on African Blues 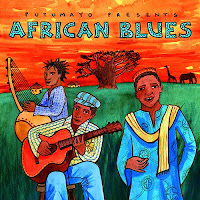 While many world music listeners think of Mali when the topic of African blues comes up, African blues it seems traverses the African continent.  Personally, I’m glad that Putumayo World Music pointed that out to me with African Blues--a compilation that features plenty of groovy Malian blues, but also includes Taj Mahal’s collaboration with Culture Musical Club of Zanzibar, which by the way, is nowhere near Mali.  As it turns out, the track, Dhow Countries by Taj Mahal Meets Culture Musical Club of Zanzibar is my favorite song on the compilation.  Mahal’s dusky signature wed to the Arabic strings of the Zanzibar orchestra hits the spot.  Besides, it is the only song sung in English so I can understand the story in the song.

So you’re wondering who else appears on the compilation.  The usual suspects such as Tinariwen (a Tuareg rock band from Mali), who teams up with Playing for Change and Keb Mo, and Issa Bagayogo from Mali appear on the compilation.  Yet, I’m exposed to new voices such as Diabel Cissokho and Ramon Goose (Totoumo),  features jangly kora along with bluesy slide guitar and drums.  The Tinariwen-Playing for Change track, Groove in G brings in sitar, and plenty of blues guitars performing 12-bar blues.  Listening to that track, you wouldn’t know where you are in the world, but somewhere to chill.  Another favorite is Muntu Valdo’s sunny Timba that features harmonica and heavily syncopated guitar.  Listen to Camel Shuffle by the Tuareg rocker Amar Sundy that includes snaky flute.

Overall, this compilation provides dusky vocals, warm guitars and flows with good pacing between then songs.  I prefer to listen to this blues CD to start my day.  I wish more women vocalists appeared on this compilation since the African continent is full of fabulous women vocalists.  Perhaps the label will put together a “Women of African Blues” compilation.  Here’s hoping.  When I normally think of the blues, sad songs form in my brain, but this compilation has a feel-good effect, as do Putumayo World Music’s compilations in general.  I would imagine that listening to this compilation sitting outside on a sunny day would uplift spirits as well.  Fantastic.