Since 2012 was a light year as far as reviewing jazz and classical recordings and heavier on world music recordings, this year I'm only including 7 recordings in the top classical and top jazz CDs for the year.  The Top Jazz CDs will appear a week from today.  You will also find two surprises on my list if you were expecting only European classical CDs. 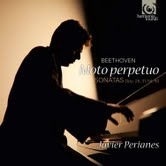 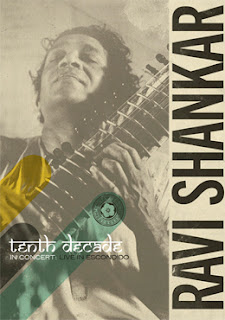 As Pandit (term of reverence in India) Ravi Shankar made his way to the concert stage, the 91 year old sitar player looked exhausted and dispirited.  Accompanied by his right-hand man tabla player Tanmoy Bose, master percussionist (also on tabla) Samir Chatterjee, student Ravichandra Kulur on bansuri flute (and percussion on one track), and another student Parimal Sadaphal on sitar, Shankar opened with the Alap to the evening raga, Yaman Kalyan.  By the time the musicians had joined in jod portion of the raga (when the tabla introduces beats), Shakar’s face emitted a rosy glow.  An hour and twenty-four minutes later as the musicians played the fiery last notes of the final raga, Ragamala, (based on an Indian folksong), Shankar resembled a new man, glowing from a spectacular performance.


The second raga, Khamaj in slow and medium tempo teen taal (or 16 beats per measure) develops into a mood-lifter halfway through with two percussionists, two sitar players, bansuri join in another spectacular performance, with the flute and sitar engaging in a playful call & response.  I thought the second raga was my favorite until I watched the final raga which in its course downstream flowed from ethereal to fiery reminding me of a calm river transforming into white rapids.  Through eye contact, Shakar engages the other musicians in musical challenges tossed like a tennis ball from one musician to the next.  And each musician knows instinctively what to play and when to build the excitement of the music into a crescendo (famous with Indian ragas). Each moment grows more intriguing and more delicious than the last one.


But prior to the feisty passages of the raga, the music slowed into an interlude where we could hear the singing qualities of the instruments basking in the glow of the evening.  Percussionists will find their thrills on the third track, Taal Vadya.  The fourth track Goonga Sitar offers a more experimental sound when Shankar gagged or muted the strings on his sitar, turning the lute into a percussion instrument temporarily.  The result proved interesting, but hardly compared to the three ragas that gave us more proof as to why Ravi Shankar, even in his nineties is one of the top ten musicians on the planet.


http://www.eastmeetswestmusic.com and http://www.ravishankar.org
Posted by Moon Child at 12:00 AM No comments:

The Practice-Music prescription for mood-lifting

It happens to all of us.  Trying to stay in a good mood and beat the positive drum, and the blues comes seeping through the cracks.  Pretty soon, the funk gets deeper and the moods spiral downward.  Some people take pills, but for mild to moderate depression, try music instead.

Obviously, turning to music with self-defeating lyrics or a vocalist lashing out venom to his or her listeners won't uplift any moods.  Sometimes when people feel a funk coming on, they choose music that will only take them deeper into depression. However, working in increments of positivity goes a long way in battling a bad mood.

For moderate depression, you need to move to the next level which is anger.  For this you might need something along the lines of Beethoven's 5th Symphony or classic American blues (not the self-pitying blues).  But you don't want to wallow in anger to then you find music that will take you to the next level.  I recommend music with a heavy beat such as West African drums and really move that anger out of your system, send it deep into the earth and watch it dissolve in your thoughts.  When you feel the next level of frustration, just keep dancing--sweat it out and get those endorphins going.

Okay, so now you're ready for the more upbeat music.  I recommend any of the Putumayo compilations (safe territory for feeling groovy), Mozart operas or Italian comical operas can also get you going.  If you don't find show tunes too corny, then listen to soundtracks from both cinematic and Broadway musicals--sing along for fuller enjoyment.  Jazz and American classic songs such as Get Your Kicks on Route 66 or any of those tunes that Nat King Cole crooned during his day.  How about Banana Boat anyone?

It doesn't matter what songs we choose as long as we're buzzing from a good mood and feel more empowered from our choices.  I realize that severe depression is another story and it's best to consult a professional therapist (a music therapist would be ideal).  But for mild depression, the right music, a good diet and exercise usually brings relief.  I know from experience.

And here's a little sunshine to add to your journey on an upward spiral. http://www.youtube.com/watch?v=U6tV11acSRk

Don't forget to keep a music journal and write down results of songs.
Posted by Moon Child at 4:23 PM No comments:

In review--The Eye of Oslo 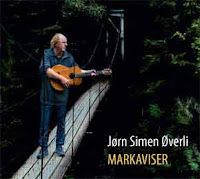 While many cities boast a monument at their center, a forested region marks Oslo’s center both geographically and for the recreational purposes.  This scenario ties into Norwegian folksongs from Oslo.  The press notes cite, “Folk songs from Oslo do not come easily to mind, even though they exist...”  Stretching the boundaries of folksongs from ones with anonymous authors of songs past down for several generations to folk songs composed by known artists, but also passed down, folksinger Jørn Simen Ǿverli joins Ǿyonn Groven Myhren (vocals on two tracks, 15 & 16), Frode Haltli (accordion) and Stian Cartensen (accordion, flute, banjo steel guitar, guitar...) on the accordion-centered Folk songs from Oslo.


The songs on the CD enchant and remind me of French bals-musette sung to the Norwegian language.  The jaunty accordion set to polka and waltz melodies sound more cabaret than folkloric.  Perhaps, this is because I have little go on besides the press notes which are the only text in English.  I would have loved to have seen English translations of the lyrics and English titles for the 20 tracks that appear on the CD, I was only given a handful.  The titles I do have include two polkas, Logger Song and The Girl from Sørkedalen.  Also we have the bouncy The Marching Competition and the ambient Moon Song.  My favorite songs are Varnise, a haunting ballad with Groven Myhren on vocals and the first three tracks. Groven Myhren reminds me of the Swedish folksinger Emma Härdelin (Triakel).  Perhaps the folksongs have an urban history, yet, I can see people of the forest pulling these songs out of a hat and singing them late into the night.  Bring on the accordion.