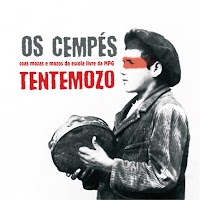 
Powered by drums and bagpipes--sounds like a marriage of Arabic modes and Celtic marches, Galician Os Cempés Tentemozo offers an uplifting listening experience.  If you are a regular visitor to Whole Music Experience, then you already know about Galician traditional music.  Similar to another Galician musician Uxia, Os Cempés creates a big sound on this recording with 50 traditional musicians bringing their talent to the project. Led by Oscar Fernández, hurdy-gurdies, violins, Galician bagpipes, tambourines, guitars, and the large Galician drum join forces and ignite into popular dances from this region of Spain.  This beautiful album was funded through the generous support of the band’s 740 friends and followers.  And you’ll want to thank these people after giving this CD a listen.


The album opens with the rousing Mirandosa and then launches into Pasodoble De Illa which carries some musical reminders of Spain’s Moorish past with its snaky rhythms and serpentine melody sung by several voices. While the album features traditional and original songs from Galician soil, listening to the diverse textures, timbres and rhythms remind us of the many routes music has traveled over the centuries.  We can hear musical culture exchanges.  Pasodoble Lugo-Ferrol reminds me of Italian folk music with its jaunty melody and circus-like tuba contributing its oompah pahs.

Muiñeiras De Agra features Celtic flutes and bagpipes playing a Spanish regional dance.  While Celtic musicians from the British Isles often perform Celtic songs from Galicia, these songs represent Spanish dances and not Irish or Scottish jigs or reels.  I once interviewed Simon Emerson of Afro-Celts who told me that Celtic music extends south, all the way to the west coast of Africa.  While I have never heard Celtic-inspired African music, I have heard Celtic music from Breton (France), Portugal and Spain.  However, at this moment, I do not wish to put on my thinking cap, but instead, listen to this frolicking music from Galicia performed by spirited musicians who preserve this music for future generations. Grazas.


http://www.folmusica.com
Posted by Moon Child at 11:59 AM No comments: