Justin focused on mainstream entities such as metal, Christian, pop and new age musicians and authors. This leaves me to wonder who was included in the other nine hundred interviews that did not make the cut. Voices such as Native American musicians Sharon Burch, R. Carlos Nakai and Mary Youngblood are missing from the pages, though Native American percussionist Will Clipman contributes his take on spirituality and music.  I am pleased to see Will contribute his reflections, as I am pleased to see Ravi Shankar represented his views in the book.


And while you would think the new age authors who focus on the significance of spirit in their personal and professional quests would contribute the most profound insights in this regard, instead provided similar rhetoric or in the case of the German new age couple, Reinhard and Cornelia Flatischler used the opportunity to promote their workshops. And author of The Mozart Effect, Don Campbell merely offered an excerpt from one of his books, rather than responding to the question directly.

And surprisingly the most thought-provoking responses came from the Ohioan band Devo, “True spirituality seeks to re-unite a thread that connects us to the rest of life and thus, brings us together.” Ron Thal, guitarist for Guns N’ Roses mentions Beatle lyrics that lifted him up during dark times--the essence of spirit working through music is that it connects with people when they need it most.


Personally, I could do without the self-promotion of some of the new age folks, the shock value of the metal musicians (especially the dark ones), and the religious fervor of the Christian musicians (though I can see this group represented by two or three interviews instead of dominating the conversation). Where are the musicians representing earth-based spirituality (outside of new age) and other religious traditions? Where are the Tibetan Buddhists?


I suppose with this line-up of folks representing the mainstream for the most part, the book will attract readers that normally don’t equate music with spirituality. I was surprised today with a response I received on a forum on music, that at least one musician had never equated music with healing. So in that respect, I feel that The Spiritual Significance of Music will at least get readers thinking and even recalling how music has affected them on a deeper level. And certainly this book will reach people that will never read my blog so it’s a step forward for humanity.


I would like to mention that many of the musicians in the book, especially the ones that perform heavy, hard and angry music were confusing rhythmic entrainment and resonance with spirit. And as someone with shamanic tendencies, I would like to remind people that not all spiritual entities are of a higher vibration. Many disembodied spirits (formerly addicts, criminals, etc), wander around looking for low vibration situations and bodies to possess so if someone enjoys that kind of spiritual experience then listening to low-vibration music will provide that for them. Low vibration is based on fear and high vibration on love.  Since we are all of spirit we attract both low and high vibrational experiences so I think discernment and mindfulness play a huge role in protecting our boundaries.


The way entrainment works is that bodies align to the rhythm of music and when you get a room full of bodies entraining to loud music, then they experience an adrenaline rush (fight or flight syndrome). If a singer shouts out angry lyrics then the audience members will absorb this anger and even express their own anger—sometimes through violent means (and I have witnessed this), and this can cause a feeling of oneness with the music and the other audience members, but should we confuse this with a connection to Spirit? It appears that many of the musicians interviewed did confuse the two.  Oneness is not alway a positive experience as we have seen with various cult behavior throughout history and the rise of Hitler's Nazism--all accomplished through entrainment and other tools of manipulation.


However, there are many musicians that did understand and articulate the power of music and spirit throughout the pages of the book. There were mentions of Miles Davis and John Coltrane and a spirituality that comes from jazz. And for me composer and pianist Kathryn Toyama’s words resonated in my soul—“I believe that music not only can comfort and heal the mind, body, soul and spirit, but it can also spiritually influence humankind to evolve beyond the need for violence.” I have experienced this too.

My hope is that Justin St. Vincent's exploration into the frontiers of spirituality and music will open up meaningful dialogue with musicians and their fans, alike.  And through this dialogue musicians will take responsibility for the words and energy they launch out into the world. 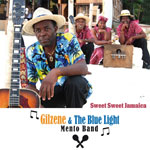 Reynoir Casimir dit Nègoce and Signature
The Quadrille of Guadeloupe

Those of you living in the far northern hemisphere will appreciate these two sunny recordings hailing from the French Caribbean Island, Guadeloupe and the former British colony, Jamaica. When many people think of the Caribbean, Cuba, Puerto Rico and Dominican Republic come to mind—meringue, soñes,bomba and plena or the rhythms that make up salsa music. The mention of Jamaica brings to mind ska and reggae—the home of the late Bob Marley.

I discovered the music of Guadeloupe and the French Caribbean last spring when I researched music of the French Diaspora for a course I taught. The Quadrille of Guadeloupe comes with hefty liner notes explaining the origins of this old world European dance quadrille and its evolution in the New World as interpreted by former African slaves. Similar music is performed on the East African Island, La Reunion, and echoes of these old couple dances can be heard in traditional Cajun and Quebecois music too.

The Guadeloupe quadrille involves a caller who raps more than sings in a raspy voice. Accordion, a scraper, shakers, a small frame drum-tambourine, triangle and guitar accompany the caller. The callers on The Quadrille of Gaudeloupe, Floriane Fèverel and Denis Clovis dit Boniface recall rap and hip-hop, though their syncopation sounds more Afro-Caribbean than continental American. And there is so much going on with this disc musically, you almost need a masters in Ethnomusicology to review it.

Although track five, an instrumental beguine certainly gets feet tapping and the heart pumping with the raspy scraper, lilting accordion and tinkling of the triangle. And I am reminded of Rene Lacaille who also plays quadrilles, beguine, zouk and other old world types of music on his accordion.

When I was teaching my music of the French Diaspora course, I enjoyed bringing in the comparisons between the French Caribbean, Quebec, Louisiana and La Reunion and finding origins in the French provinces such as Normandy and Brittany as well as, Central France. But it will be years before I train my ears to discern the subtle differences and my feet don’t get away from me. When I listen to this music, the last thing I want to do is sit behind a computer screen typing a review. I prefer to dance.


However, I enjoy discovering new types of music to my ears. Gilzene and The Blue Light Mento Band perform a traditional music that predates ska and reggae, two popular music proponents hailing from Jamaica. On their debut disc (World Village), Sweet Sweet Jamaica, the traditional quartet performs a style of music called mento. You can actually hear the roots of reggae in the guitar rhythm, but the banjo, shakers and rhumba box quickly announces that this is not reggae.

Unlike other Caribbean musical traditions of former African slaves, you won’t find call and response vocals, but harmonies that fall on the flat side. The defining features are the cross rhythms played on the rhumba box, shakers and guitar with the banjo playing lead. And as mentioned earlier the singers provide vocal harmonies to uplifting songs, though some of the lyrics tackle social issues.

According to the liner notes, “Mento which was born from the marriage of European melodies with African rhythms brought an intermingling of cultures that defined the colonial period, can rightly be hailed as the first form of indigenous Jamaican popular music to ever be recorded.” The Jamaican music industry of the 1940s and 50s was founded on this genre. But though popular in Jamaica, it never caught on abroad in the same way that calypso from Trinidad did. Mento did pave the way for ska and reggae which did become music of households all over the world. Who hasn’t heard of Bob Marley and the Wailers?

Gungu Walk offers a gentle introduction to mento with its uplifting sunny feel and hearty vocals. I wonder if Marley and other reggae superstars cut their teeth on this music. Certainly it’s fun to imagine their musical roots coming from mento. And while mento did not take off internationally in the 2oth century perhaps it’s time has finally arrived. Sweet Sweet Jamaica certainly an aptly applied title takes a little adjusting to, but once your ears pick up on its grooves, the music grows infectious and delightful on this long play disc.
World Village
Posted by Moon Child at 5:37 PM No comments: