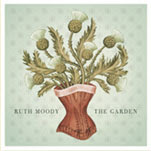 I didn’t know what to expect from Ruth Moody’s (Wailin’Jennys) solo outing The Garden. I thought the musician-songwriter would bring out the Celtic music influence, but you won’t find any Irish fiddling on this album. You will find fabulous musical arrangements that fall between country, bluegrass and folky pop (Travellin’Shoes) and you’ll find some of Moody’s best song crafting of her career thus far. Moody expands her vocal range singing in a whispery voice on Never Said Goodbye (she also plays piano on the track), and then giving Emmy Lou Harris a run for her money on the duet We Can Only Listen. On Tell Me she recalls Patsy Cline’s classic hits. Moody also crafts catchy tunes with witty turn of phrases.

The other thing Moody does that amazes me is she takes old worn out phrases such as “birds of a feather stick together” and she turns it into art. I’m not sure if she’s using these phrases as clever devices or if she’s poking fun at them. Either way she lifts the IQ of country-style music a few notches. There’s a belief out there that country music is for brain dead people, but we must remember that country singers with higher IQs and song writing talent exist in the sea of mediocrity. They might not receive airplay on commercial country stations, but do show up on community radio specialty shows.  Moody's brilliance is in how she turns a phrase and makes it her own as well as, how she conveys difficult emotions through her poetry and heartfelt singing.

Standouts on this charming disc are the piano ballad Never Said Goodbye, the lively title track, the Americana with a capital “A” song, Nest and the sexy Cold Outside. You must remember that Ruth hails from Winnipeg where winter comes in October and doesn’t leave until May. I’m growing fond of this recording which closes with the other 2/3rdof the Jennys lending their vocals to Closer Now.

http://www.ruthmoody.com and http://www.redhouserecords.com
Posted by Moon Child at 7:11 PM No comments: 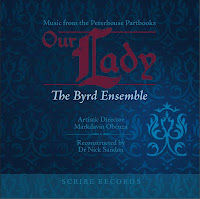 
The Tudor period represented a traumatic time in English history.  We are reminded of the vengeance of Henry VIII against not only his wives (plural, he had 6 of them), but also against the Catholic Church.  During his reign monasteries were sacked and musical composers displaced unless they could adapt to composing for the protestant church.  Somehow these Catholic compositions on Our Lady were saved for posterity.  The church music of this time (renaissance) featured polyphonic and monophonic vocals.  One of the most famous composers of this period of English history was Thomas Tallis, who greatly inspired both the Seattle-based The Byrd Ensemble and the Tudor Choir.


While I’ve reviewed recordings by The Tudor Choir, Our Lady is the first recording I’m reviewing by The Byrd Ensemble (formerly The Renaissance Singers).  I’m out of touch with Seattle’s early music community these days since I live further north (practically Canada).  But in the past, I heard many good reports of The Renaissance Singers which came on the scene in 2006 when I was writing a piece on early music choirs in Seattle.  I knew at some points our paths would cross since early music ranks high on my list of healing music. Renaissance polyphony via The Tudor Choir, Trio Mediaeval and Anonymous 4 have cured many headaches and helped me to get out of my head and into my heart.


So let me back up for any readers not familiar with sacred polyphony.  Polyphony signifies several voices singing multiple lines.  This music is complex for singers and composers alike and since this music comes from music books from the renaissance, incomplete so that an academic versed in this type of music, in this case Dr. Nick Sandon, had to piece the compositions together.   The tenor and treble voices were missing in the 4 compositions that appear on the recording, William Pasche’s Magnificat, John Merbecke’s Ave Dei Patris Filia, Nicholas Ludford’s Salve Regina and Thomas Tallis’ Ave Rose Sine Spinis.  And yes, the music for mass are all sung in Latin.


I’m not a music scholar so I can only review Our Lady as a fan of early church music.  The vocal lines seem flawless and seamless on this recording as I listen to the range between the deep bass and the vaulting soprano.  All the ethereal pieces relax my mind and calm my heart, especially when phrases end on a consonant chord.  While I would rather hear this choir perform this a cappella polyphony at St. James or St. Mark’s Cathedrals in Seattle, I imagine that listening to this CD on headphones would offer me an amazing listening experience.  Yet, at the moment as I sit in my urban apartment, I struggle to hear the vocalists above the din of cars on the street and a freight train blaring in the background. What I mean to say is that the recording falls on the more tranquil side and is better listened to on headphones in a quiet space.


I recommend either seeing this choir live in Seattle or going to a quiet garden or wooded place and listening to Our Lady on a portable player.  The vocalists treat you to a full spectrum from bass to soprano while offering a sacred respite from the everyday world.  And no doubt this music would cause anyone to slow down and breathe deeply.  You might even sigh from its sheer beauty.  Meanwhile, I'm going to get further acquainted with this recording and choir.  The Tudor period also piques my interest.

Posted by Moon Child at 5:32 PM No comments: