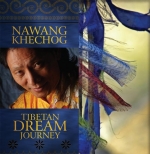 Although I’ve not forgotten about the former Tibetan monk/musician Nawang Khechog, it has been four years since the release of his last recording. In 2007, Khechog suffered a head injury from an automobile accident in India. In 2008, the musician suffered a heart attack. Despite these tragedies and long recovery, he published his first book, Awakening Kindness (Beyond Words) and helped with the documentary film The Sound of Tibet. Now, the musician releases Tibetan Dream Journey, recording that offers a powerful sonic experience—no doubt healing.


I interviewed Khechog in person during the summer of 2006. The interview appears on this blog and on World Music Central. I don’t take Khechog’s music lightly and listen to it to relieve stress and help me find my spiritual center. Although I’m not a Buddhist, I respect this spiritual path and the people on it. However, Tibetan Dream Journey isn’t just for practicing Buddhists and it’s not just helpful to those folks already on a spiritual path. Anyone even considering their spirituality and needing to explore it further would benefit from the songs on this recording.


With all Khechog recordings, this one proves peaceful with its Tibetan flutes mixed with gentle keyboards, piano, tabla, chimes, bells, and Tibetan Buddhist chants. The Dalai Lama appears on Chant of Universal Compassion, a chant that promises to open the heart chakra to compassion and kindness—two virtues that Khechog promotes in all of his work. The entire recording lasts 60 minutes and it is well worth the listener’s time to listen to the entire CD in a sitting. I have used it to support my meditation practice and find that it’s perfect for that.


I feel grateful that Nawang Khechog has returned to the world of music and recording. I’m happy that he recovered from his hardships and transformed his life and the lives of others. I’ve heard most of the musician’s recordings and would say that this one is the most powerful one yet. If you are serious about healing your soul, mind, and body, do yourself a favor and pick up this CD.


http://www.soundstrue.com
Posted by Moon Child at 11:33 AM No comments: