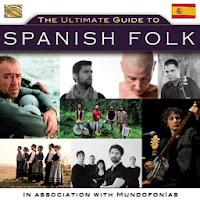 I have known for several years about the diverse folk music traditions coming from the provinces of Spain.  From the haunting strains of Galician Celtic fare to the fiery strums of Andalusian flamenco to early music traditions, and the music of the Jewish and Moor populations, we could spend a lifetime discovering Spanish folk traditions.  While hardly an exhaustive compilation, The Ultimate Guide to Spanish Folk Music whets our appetites, though some of the tracks sound too modern too my ears, while others such as Doa’s revisit to the early music song, Levou-se a fremosa has me swooning a bit from its enchanting vocals and hurdy-gurdy.

Compiled by radio hosts, Juan Antonio Vásquez and Araceli Tzigane (for Mundofoniás--national radio of Spain), we hear music from Majorca, Barcelona, the Canary Islands (which is new for me), Galicia, Extremadura, Asturias, Valencia and accordion from Basque Country, just to give you an idea of their musical travels.   This compilation shares commonalities with the Rough Guide music compilations with its wealth of information presented in the liner notes and its combination of unknown musicians (outside of Europe or Spain) and bigger names of world music such as, Marina Rossell (Un Somni en dos actes), and Kepa Junkera (La Tía Canaria) and Eliseo Parra (La Llave de la alegría).  Folk instruments play along side more modern sounds on some tracks or a song could only feature two or three acoustic instruments.

Galician Mercedes Peón opens the CD with the rollicking Isué--certainly a high energy song featuring traditional tambourines, frame drums, hurdy-gurdy, bagpipes, accordion and a hearty choir.  Typical of Galicia, this song weds Middle Eastern modes with Celtic strains backed by polyrhythms.  In contrast, from Asturias, Anabel Santiago’s Ven a veme only provides rhythm on an acoustic guitar and light percussion that frame Santiago’s elongated and soaring vocals.  Manu Sequera from Extremadura brings us the fun a cappella song, El gazpacho and you might just walk away hungry after listening to a recipe for gazpacho (that is if you understand Spanish).

On the track, La Tía Canaria we are treated to the traditional accordion of Basque Country and the lute, timple from the Canary Islands on this sweet instrumental piece.  The compilation wouldn’t be complete without one of my favorite Spanish vocalist, Marina Rossell who teams up with Catalan string specialist, Eduard Iniesta on Un somni en dos actes.  And from Valladolid, Eliseo Parra performs La llave de la alegría on instruments from around the world and regional Spain.  This is another one of those songs that sends me on a quest for regional music.  While I cannot get to all the artists on the compilation, I find the overall collection enjoyable and recommend it to world travelers

Video for Doa
https://www.youtube.com/watch?v=pddDMYNtLv8
Posted by Moon Child at 11:54 AM No comments: 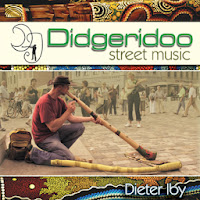 On visits to YouTube, I have encountered street musicians playing didgeridoo on street corners and sidewalks.  I can’t imagine encountering didgeridoo players on the streets where I reside, however, I can listen to Dieter Iby perform his world fusion on Didgeridoo Street Music.  The musician arranges didgeridoo with West African percussion instruments and he partners with kora player (West African harp) Stefan Charisius on Sim.Mah (Pisces) with spectacular otherworldly results.  Iby also pleases me with his song titles which feature signs of the Zodiac.  I’m not sure if the musician is familiar with astrological energies, but he certainly matches the right song to the right sign.

For instance, the opener, Gu.an.na (Taurus) feels sensual and grounding to me similar to the sign Taurus and the track I already mentioned for Pisces also feels right on.  The second track, named for Leo starts off with a roar and has a jungle like feel after the drums show up.  So this leads me to experiment by seeing how well the songs match the signs.  Gu (Aquarius) should electrify us or wake us up.  This song starts out with chimes (which is already different than the previous tracks), and then, yes, it feels electrifying once the didgeridoo starts grooving.  The Libra track would bring us back into balance--and the didgeridoo strikes a balance with percussion.  Let’s look at one more track, Dub (Cancer) which should evoke deeper emotions and a sense of safety. I don’t know that it does, but it’s funky nonetheless.

This CD features invigorating music that begs us to move in some way, preferably free form dance.  Even with the low guttural sounds of the didgeridoo, these songs won’t relax listeners and pets might not respond positively to these songs because of their jagged rhythms (so be mindful not to crank up the volume when pets are around).  I am unable to listen to the entire CD in one sitting, but I enjoy listening to a few tracks at a time.  However, if you love didgeridoo or play this instrument, you’ll want to add this recording to your collection.  You might even learn new techniques from listening to it.