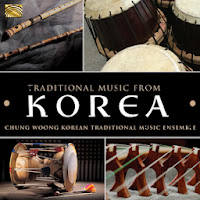 I’m pretty sure that the last time I heard traditional Korean music was while watching a historic Korean movie at a film festival.  Since I enjoyed the soundtrack to that movie, I leaped on the chance to review Chung Woong Korean Traditional Music Ensemble’s CD, Traditional Music of Korea.  The recording was produced at the Festival Mondial des Cultures de Drummondville, Quebec and released on the Arc Music label, which specializes in the world’s music traditions.

The instruments first capture a music listener’s attention, from rousing drums, gongs, clappers, to a variety of zithers, oboes, flutes and a shawm.   Rousing at times and tranquil at other times, these musicians immerse us in Korean music and culture, including meditative, ritualistic and festival music.  For instance, the CD opens with the tranquil Ch’ŏngsŏng jajinhanip performed on a solo bamboo flute.  Then the ensemble launches into a live processional piece with clanging gongs, banging drums (such as the double-sided barrel drum), and a loud and raspy shawm.  The third song is a chamber orchestral piece inspired by Buddhist music.  But if you’re expecting something meditative, think again! Though it moves at a slower pace, the music falls on the lively side.

While this recording features mainly instrumental pieces representing different facets of traditional Korean life, Shimch’ŏng’ga features a woman vocalist accompanied by a traditional drum.  The song laments the death of a blind man’s wife and yes, it is rather mournful and beautiful at the same time.  However, the CD concludes with two drum-driven songs to lift spirits. For anyone who has never heard traditional Korean music and even for those who have, Traditional Music from Korea offers a musical glimpse into a vibrant, colorful and acoustic world. 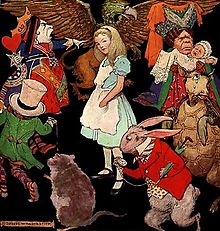 When I grew up, we took music for granted.  The town where I grew up  provided a district-wide music program for K-12.  Prior to entering elementary school, my mother exposed my siblings and me to classical, jazz, Latin American music, and Broadway show tunes.  We also learned songs from popular children’s entertainment such as Disney movies.  In fact, I don’t recall music ever absent from our home.  We listened to, performed, and explored music.

Fast forward to 1997 and the publication of Don Campbell’s book The Mozart Effect which brought a shift in consciousness to how we view classical music, in particular, as it relates to emotional, physical, and mental development.  Pregnant women introduced their fetuses to Mozart’s violin concertos and mothers played Mozart recordings to jump start their toddlers’ brains. However, the years that followed the book’s publication brought criticism especially with the concept of employing music to enhance mathematical and spatial-reasoning skills in children.

Neuroscientist and author Daniel Levitan counts himself among those critics of the research findings.  In his book, This is Your Brain on Music, Levitan argues that music education should be for the sake of a musical experience and not just to boost math abilities. I couldn’t agree more since my approach to music has always involved the entire being.

While Mozart’s music boosts a learning environment, it does so for the brain, body, and emotions.  But only focusing on Mozart’s music for early child development is a huge mistake.  Children need a variety of sound experiences, including exposure to music from other cultures, playing age-suitable instruments, and given the space to engage, and lose themselves in the joys of musical expression.

Hilary Field, a co-founder of Mulberry Bush Music and Movement (Seattle-based music program for infants and toddlers) says, “My personal feeling is that music education helps to build the intellectual and emotional character of the whole child.”  Field elaborates further, “A non-judgmental environment of positive reinforcement helps to create a safe place to learn, to make mistakes, to take risks, and to explore one’s own creative potential.”

“I developed the Timbalooloo Method, which centers on games, stories, and songs that I designed to help children internalize fundamental concepts of music intuitively and providing them with a full vocabulary of the musical spectrum by use of songs from the masters of various genres,” says Etkin.

The jazz musician employs a whole body approach to learning music. “Music is unique because it combines many forms of development at once—mathematical thought, coordination, emotional expression, speech, social awareness, and cultural awareness are all at play when you make music,” says Etkin.

One device he uses on his recording and in his classes involves storytelling.  Etkin says, “I tell stories about Brazil and about (Antonio Carlos) Jobim as a little boy and they learn the samba, count it (‘one chi-ka-two, one chika-two’), dance it, drum it and sing a song by Jobim.”

Children benefit from both listening to music and performing it starting in infancy. Parents can play any of the Putumayo Kid CDs for instance in the background, sing to their infant, give the infant a rattle to shake, and dance holding the child.

Founders of Woodstock Chimes Music Collection, Gary and Diane Kvistad produced the Chimalong in the 1980s after giving birth to their children.  “Many other instruments were added which were geared towards children of all ages, but mostly focusing on young children who needed good quality musical toys to play with that would give them the sound of real instruments at a reasonable price,” says Kvistad.

Adults now in their late twenties mention to Kvistad that they grew up with instruments from the Woodstock Chimes collection. “Several had told me they are now musicians and the Chimalong was a major factor in their love of music,” says Kvistad.

With so many grade schools cutting out music programs, music in the home proves crucial to a child’s development and appreciation for various musical genres.  Kvistad reflects, “It’s sad that school programs have cut back on the arts since studies have proven year after year that musical experience not only allow children to become creative, it helps in their learning in general in all subjects.”

Kvistad suggests percussion instruments, “(they) offer eye-hand coordination benefits more than other instruments due to the physical nature of playing these instruments.”     The best environment isn’t the one that transforms a child into a virtuoso, but a setting where a child finds the musical experience joyful.

Field says, “Dr. Shinichi Suzuki, the founder of the famous Suzuki method for children, exclaimed, ‘Teaching music isn’t my main purpose.  I just want to make good citizens. If a child hears fine music from the day of his birth, and learns to play music himself, he develops sensitivity, discipline, and endurance.’”

Let’s not forget, that the genius Mozart heard music in his mother’s womb and his father was a respected musician. Amadeus and his musically-gifted sister grew up in a musical home, and city. Exposure to music won’t transform every child into a genius, but at least into a sensitive citizen.

(A different version of this article originally appeared in the Skagit Valley Food Coop newsletter, The Natural Enquirer).
Posted by Moon Child at 10:00 AM No comments:

In Review--Persian Poetry and the Equinox 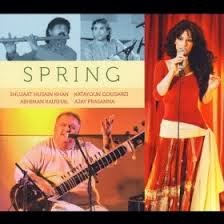 World
Shujaat Husain Khan, Katayoun Goudarzi,
Abhiman Kaushal and Ajay Prasanna
Spring
(no label)
To say that Spring by Hindustani sitarist Shujaat Husain Khan and Iranian vocalist Katayoun Goudarzi is a “heart” album barely describes the listening experience.  Combining the ancient Sufi poet Rumi’s soulful language with the strains of Indian sitar, bansuri flute (Ajay Prasanna) and gentle tabla beats (Abhiman Kaushal), these musicians aim for spiritual Oneness and achieve it.  Certainly, I would love to have the Rumi text in front of me while listening to this double CD recording, but even closing my eyes and allowing the voices and instruments to float over and around me takes me to a meditative place.
Yâr with its lilting melody, repetitive poetry line, and delicious beats as well as, passionate Spring (titular track), stand out as favorites for me.  The first song mentioned features virtuoso sitar that wraps around Goudarzi’s sensual alto voice.  You can feel the singer’s longing dripping off her voice.  When Husain Khan and Goudarzi’s voices blend together listeners enjoy a musical respite as well.   Can’t have spring without Autumn and on this dreamy track, we are treated to alap moments (the first and slow movement of a raga where a melody gently unfolds).  The bansuri flute, baritone vocals, and slow moving sitar act as the perfect balm for a Vata dosha.  It’s a song that drifts like an autumn leaf in a breeze, gently floating down to a leafy ground.
In fact, most of the songs, (dare I call them ragas?), here have listeners gently floating into inner space, and most effectively, into the heart center.  However, watch out for bursts of passion which conclude the songs.  When exceptional talented musicians set Persian poetry to classical Indian music, we know the musical journey can only take us to a fantastic healing place.  I recommend you go there.

http://www.rockpaperscissors.biz
Posted by Moon Child at 10:41 AM No comments: