The Practice--This is Your Body on Music

Ever so often I wake up with an idea for a new blog post for working with sound and music.  Today while meditating, I started paying attention to how my body responded to the songbirds outside my window.  Then I pondered the question, what constitutes music?

Since I have listened to music from around the world in a variety of modes, scales, and structures, I understand that when even 3-notes are repeated in a pattern, this constitutes music.  Since all of this music came from humans there was no question as to its status as music.  But when we deal with nature do we consider the frog and bird songs actual music? And what about the frequencies contained in these nature songs, how do they affect our health and well-being? Do you ever wonder?

To indigenous musicians and people this is a no-brainer.  To them of course nature provides music and healing frequencies.  Indigenous people the ancients believe that the world is made of frequencies and that everything is interconnected, meaning those frog and bird songs affect the cell activities in our bodies.  Musicians and scholars such as the late Marjorie De Muynck and David Rothenberg actually spent time with non-humans creating music.  They do this for different reasons given their diverse backgrounds.  For instance, De Muynck was both a musician and an energy healer with indigenous heritage (Cherokee), so she produced nature-based recordings for healing and balancing experiences. 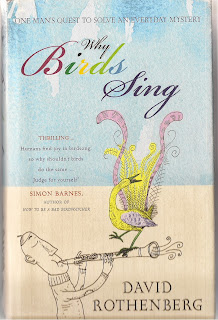 Rothenberg, comes more from a philosophical background, but is obviously in love with the natural world and on his Wikipedia page, he mentions that preserving the songs of nature help us to appreciate nature more so that we preserve it.  Not a bad mission.  He has recorded with birds, whales and insects--look for his videos on YouTube and his books in your favorite bookstore.

You can find Marjorie's CDs and books on Sounds True or Lemniscate Music (see end of post for links).

So the practice that I suggest is to visit a tranquil natural setting preferably with frogs or songbirds or if you are really eclectic head to a place with gulls or crows.  Sit in this place and pay attention to your body's reaction to the nature songs.  To be honest, I feel that the songbirds or frogs will provide you the most relaxing experience.  Though a sound of a hawk in the distance certainly has his or her effect too.  You can also try this with the wind, or a gurgling creek or the sound of waves coming in and out.  However, the key is to go out in the natural world and not use a nature CD for this purpose.  I want you to feel all the elements of nature around you so that you can experience a sense of Oneness. 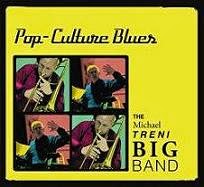 Jazz/Big Band
The Michael Treni Big Band
Pop-Culture Blues
The Bell Production Company
When I think of big band, my mind wanders back to the swing era and the likes of Duke Ellington and Ella Fitzgerald.  I’m ready to join a chorus of Stevie Wonder’s Sir Duke commemorating the big band era.  Today, big band is less about swing and more about encompassing the history of jazz played on brassy horns, sultry winds and a big drum sound.  On Pop-Culture Blues, the title says it all, and trombonist and bandleader Michael Treni play jazz with blue notes with finger-snapping rhythms.
Expect high-octane solos on this instrumental album and a variety of blues, including Summer Blues, Smokin’ Blues, Mr. Funky Blues and of course, Pop-Culture Blues which reflects on weariness to pop culture and blues reflecting popular music styles.  I’m enjoying BQE Blues at the moment with sassy horns.  On Minor Blues, the musicians slow down and perform a blues ballad, but the biggest kick on the CD is Bluesy Bossa where the blues teams up with a Brazilian classic (bossa nova).  Craig Yaremko’s flute offers South American exoticism to the mix.  However, the CD mainly features walls of horns--crystal clear to sultry, and of course, bluesy. 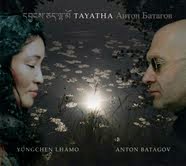 In 1998, I attended WOMAD USA and witnessed an entrancing performance by Tibetan vocalist Yungchen Lhamo on a small stage.  I witnessed a second performance by the vocalist, equally mesmerizing but on the main stage at WOMAD USA in 2001.  Although I acquired Lhamo’s recordings 2nd and 3rd), on the Real World label, I didn’t care for the musical production on the recordings which buried Lhamo’s vocals underneath high-end guitar washes and programming.  Lhamo has one of those voices that works best in an a cappella setting or lightly framed by a single musical instrument.

Fortunately for us, the vocalist paired up with Russian classical pianist Anton Batagov on the recording, Tayatha where the musicians read each others' instincts.  Batagov’s piano though light on the keys possesses shades of virtuoso and waxes musical poetry.  The piano and vocals show up in equal amounts and the piano goes beyond merely accompanying a vocalist.  Meanwhile, Lhamo lends an insightful ear listening carefully so that her voice matches the contours of the piano.  And since both performers are practicing Buddhists, plenty of spiritual references in the text and reverence in the music radiate off this CD.  This recording feels as peaceful as Lhamo’s debut recording on Real World Records where she performed a cappella.

Due to the Tibetan modes (scales) in which Lhamo sings coupled with the slow pace of the piano, the songs come off as either relaxing or slightly melancholic.  You won’t hear any energetic Tibetan folk songs here, but you will fill up with an intangible beauty from this piano vocal combo. On Flying Dakini (track 2), Lhamo does sing a folk type line that feels playful even if the song’s topic falls on the serious side.  Your Kindness opens with powerful a cappella vocals then Batagov’s piano swirls and dances its way into the center with Lhamo’s vocals growing more powerful.  We listen to this song and we know why the 14th Dalai Lama named Lhamo “the Goddess of Song”.  With 7 long-playing tracks, Batagov asks us to listen to the recording in one sitting to experience its continuity.  This is good advice.  You might even fall into a trance and press replay.

http://www.cantaloupemusic.com
Posted by Moon Child at 12:00 AM No comments: