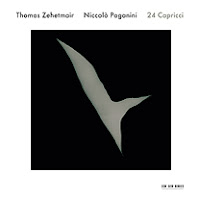 
I became a fan of Niccolo Paganini back when I took a history of Western music class in college. The fiery and bombastic qualities of the Romantic Era composer and violinist's work dovetailed with my rebellious late teen personality of that time. And throughout the years I remained a aficionado of Paganini. I recall hearing a line from Kate Bush's Violin referring to Paganini and later, watching the Canadian film, The Red Violin, again I felt goosebumps listening to the Paganini-like soundtrack.


Paganini had a reputation of being a devil with an enchanting fiddle. True to the era in which he performed music, he certainly knew how to work emotions with a bow and strings. Mostly I have heard the 19th century composer's concertos, so it is refreshing to hear his solo violin work performed by Viennese conductor/chamber musician Thomas Zehetmair take up this challenge. And this collection of caprices fly right out of Zehetmair's violin.


The violinist takes off with Caprice No. 1 in E major and gets hearts fluttering right off the bat. Which I will note that Paganini's music is not for the faint of heart or for someone experiencing frail health. The speed, passion and tension in these caprices might further aggravate someone suffering from anxiety or agitation. But for the rest of us, these 24 caprices with birdlike imitations, pioneering spirit, and fiery bordering on madness, might just be the ticket to get us to stop procrastinating or to heal doldrums.


In the press release, Zehetmair is cited as "an adventurous soloist," who has tackled the works of Mozart, Schumann, Karol Szymanowsky and Heinz Holliger. He seems to be channeling the musical spirit of Paganini on this recording and certainly this top-rate performance feels mesmerizing, if not hypnotic.
Zehetmair coaxes both worldly and otherworldly sounds from his instrument, while showing great respect to the Italian composer/violinist. And without the backing of an orchestra, I believe these are the best interpretations I have heard of Paganini's compositions thus far---highly recommended for music lovers needing more passion in their lives.

Posted by Moon Child at 7:44 AM No comments: