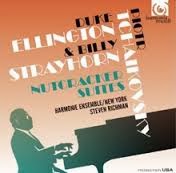 No one was thinking of swinging to Tchaikovsky’s Nutcracker in 1892 when the Russian composer wrote the incidental music for ballet. Yet, when you listen to the Overture, we hear hints of jazz, even if this seems preposterous or impossible.  And when Harmonia Ensemble performs the March, again, we hear the delights of jazz.  Is this a coincidence? Perhaps, since Harmonia Ensemble performs back-to-back Tchaikovsky’s late romantic era ballet along with Swing Master Duke Ellington’s 1960 Harlem ballet version.  So if you’re wondering if much was lost in the translation, let’s just say a lot more layers were added.

While this is a fabulous concept, I feel that the ensemble rushes through the classical version, which is probably why I’m thinking “swing” while I try to catch my breath.  Oh, the performance is still majestic and nostalgic, but a bit too fast for my taste.  The Russian Dance however slows the pace down and we land in the dreamy territory that the original ballet intended.  Waltz of the Flowers, the longest track is divine and I wish it lasted longer because it’s the type of music that begs to be savored, even if Tchaikovsky was depressed when he composed the ballet music.

On the Ellington side, a different group of musicians comes on board with Lew Tabackin on saxophone, Bill Easley on clarinet, George Cables on piano, Lew Soloff on trumpet and Victor Lewis on drums who bring us finger-snapping delicious rhythms that brings on a different genre of dancing.  Peanut Brittle Brigade (March), flies out of the speakers and hits me square in the head with its rambunctious trumpet.  I don’t hear the original piece in the song, unfortunately, and it feels like looking for realism in abstract art.  The effect works nonetheless.  Sugar Rum Cherry (Dance of the Sugar Plum Faeries) is recognizable even if it reminds me of a Nino Rota soundtrack for a Fellini film.  Dance of the Flowers also rings a bell, but is pure Ellington with some Tchaikovsky tossed into the mix.

It’s not even Halloween and here I am listening to The Nutcracker and it feels right at home.  Play Harmonia Ensemble’s Nutcracker Suites for pre-holiday or holiday fun.  You might get everyone in the room dancing one way or the other.

Posted by Moon Child at 1:10 PM No comments:

Feed Your Mind with Whole Music

What if your shopping list looked something like: Organic broccoli, organic carrots, organic soy milk, and acoustic music CDs? It might if you think of music as an energetic substance that your body absorbs and digests.  Current research shows it does.

According to psychoacoustic experts (researches the effects of sound/music on the nervous system) music entrains our minds and bodies.  Every cell in our bodies responds to musical vibration and while some types of music lifts our moods and immune responses, some music can lead us into a black hole of depression and low immune responses (think heavy metal).   While many of us recall Don Campbell’s 1997 book, The Mozart Effect, not everyone prefers classical music. 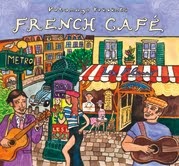 We can still reap the benefits of music by listening to other genres including world and jazz, among other favorites.   Some popular music is considered healthy if it has a strong melody and it doesn’t possess boosted bass & drums or harsh lyrics.   While we feel safe purchasing our groceries at food cooperatives we can also feel assured with the music CDs sold at this coop.

Most of us by now are familiar with the Putumayo World Music label.  We have seen the CDs with the distinct folk art design of Nicola Heindl in boutiques, bookstores, coffee shops and grocery stores.   Think of the seductive French Café compilation often heard wafting through the coop.  It feels fantastic, no?

Founded by Dan Storper and Michael Kraus in 1993 Putumayo World Music label sports the motto, “guaranteed to make you feel good.”  When asked how he accomplished this mission, Storper responds, “We try to select music that our staff of all ages and backgrounds in the US and Europe love with the hope that others will appreciate the songs as well.  I sometimes call what we’re striving for as ‘the spirit of Bob Marley’ because he’s the king of universal music.”

While Putumayo presents tastefully produced groove and lounge compilations, I prefer its acoustic compilations such as Acoustic Africa, but I’m also enamored with the 2003 compilation which presents a musical mix, French Café.  With an array of world and jazz music traditions, the compilations consistently emit a wholesome vibe.

“We’ve developed an extensive list of more than 100 potential themes,” says Storper.  “Based on a combination of music that’s being collected which can evoke a theme, ideas that we’ve had for awhile or customers’ suggestions, we’ll pick a theme and try to collect enough exceptional music.”

The label also donated over $1,000,000 to 38 non-profits including Amnesty International, Oxfam, Mercy Corps and Coffee Kids.  A kid’s music label with teaching aids was launched in 1999 and a radio show, Putumayo World Music Hour in 2000 which airs on 170 commercial and non-commercial radio stations and streams on the Putumayo website.  The label opened offices in Europe, Asia, Oceania, South America, and Africa.  The label appeals to cultural creatives with its uplifting ethnic music and support of social justice.

Based in Santa Fe, New Mexico, De Muynck discovered through her sound healing practice that acoustic music works best in a healing environment.  Some people find that they have acquired sensitivities to EMF (electromagnetic field) and find that an acoustical music wash combined with overtones from tuning forks and other sound healing tools eliminate blockages from their chakras.
She worked mainly with instrumental overtones tuned to the key of the universal vibration “ohm” on her recording In the Key of Earth.  On her follow-up recording, Healing Music Vibration she brought in jazz instruments and a harmonica which she combined with sound healing tools, and crickets, birds, bees, and bats.  While many sound healing recordings employ electronics, De Muynck prefers natural sounds.

“I was moved to compose using acoustic music as I wasn’t attracted to using preset synthesized music that was really made by a technician at Roland Music,” says De Muynck.   “Because so few people really experience the sound of nature and its simple beauty that I tried to emulate that as much as possible within my compositions.  The music to me feels more elemental and that in itself is healing.”

A professional jazz musician, sound healer, and scholar, De Muynck ‘s Cherokee grandparents introduced her to the sounds of nature and her musician father to jazz and blues.  “Most of the world music I’ve listened to for over a half of century was songs about the natural world and how all is part of the weaving of life.”

She doesn’t only play this music for humans, but found that animals also respond positively to its healing effects.  Her own animals enjoy the music and she noticed wildlife responded positively too.  “I can honestly say that a few times I’ve noticed the birds have sung along with the music, both rhythmically and tonally,” says De Muynck.

While birds respond favorably to sound healing recordings, a project Through a Dog’s Ear (TADE) spearheaded by classical pianist Lisa Spector and psychoacoustic expert Joshua Leeds found that dogs respond best to psychoacoustically-designed classical music.  Through 2 years of testing of 150 dogs coordinated by Dr. Susan Wagner (veterinary neurologist), the researchers found that “psychoacoustically-designed classical music caused 70% of the dogs in a stressful kennel environment and 85% of dogs in their homes to be noticeably calmer after listening to the music.” (TADE Volume 2” liner notes).

“Veterinarian offices are recommending TADE for pre and post surgery because they have seen results of how calming and comforting the music is for dogs,” says Lisa Spector.  Dog trainers have also found the music an effective tool for a variety of anxiety issues.

While dog trainers and shelters have found the series effective, Spector cites, “Through a Dog’s Ear is music for dogs and everyone who loves them.” Dogs might even hook their human companions on Mozart and other delicious music.

Article Round Up--Music and Mindfulness

I found a new magazine Mindful at the library and in the August 2013 issue, the editors included an article on Evelyn Glennie (the deaf percussionist from Scotland), "Tune in, Turn on" written by Mariko Jesse.  Since I promote mindfulness through music, I highly recommend reading this article and the new magazine.

In the March/April 2013 issue of Natural Health magazine,  a brief news piece on page 24 mentions mindful eating while listening to soft jazz music.  The article is based on a study in Psychological Reports.  You might also check out Brian Wansinka, Ph.D. book Mindless Eating (Bantam).