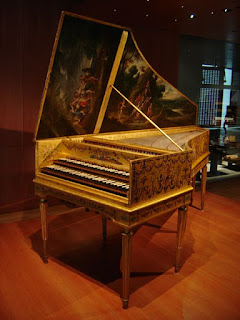 
After I posted an announcement for music awareness interviews on the Linked In group Music and Emotions, German composer/musicologist/musician (harpsichord and vocals), Klaus Miehling contacted me. I know Klaus briefly from my interaction with this fascinating group where musicians discuss how music affects the brain, nervous system, and ignites our emotions.

Klaus comes from the realm of Early Music, but he also composes music for modern instruments (as well as early music instruments). He did his undergraduate studies at Schola Cantorum Basiliensis in the 1980s and he earned his Doctorate (musicology and art history) at the University of Freiburg, where he currently resides. He is the author of several books and 250 compositions for historic and modern instruments.


Whole Music Experience: With so much awareness now with brain science and music or musical effects on our physical, mental, and emotional bodies, as a musician did you already have awareness of the effects on your own mental processes, emotions and physical body as you immersed yourself in musical studies, research and performances?

KM: I was deeply moved by music, especially baroque music, when I began to study; and already during my adolescence I developed a disgust for pop and rock music because of its aggressiveness. But in those times I didn't really reflect about it. However, it was always important for me to perform music in the way and with the means that the composer intended. Therefore I went to the Schola Cantorum Basiliensis which then, in 1982, was the only place where it was possible to study exclusively ancient music and historical performance practice.


WME: Is there any particular composer or genre that has had the strongest impact on your health and well-being? For instance, many psychoacoustic experts work with Bach or Mozart or Corelli—do you find the works of any of these composers exceptional as far as health impacts?


KM: I don't think that this is linked to certain composers. Personally, I have a special affinity to Rameau since I am 15 years old. But I am afraid that the impact of music on health is not very substantial. Just think about the sufferings and diseases of so much great composers. Much bigger is the impact on personality. The emotions in the music are evoked in the listener and therefore form his character. If you listen e.g. to aggressive music you become aggressive yourself, and if this happens repeatedly, you practice being aggressive and therefore become an aggressive person. This is the way popular music could generate the change of values and the increase of criminality since the 1960's. If our youth would be socialized with classical music instead, the world would become a better place.


WME: Finally, during the course of your career as science has caught up with the hidden powers of music and even metaphysical concepts, what new discovery has had the strongest impact on you and your work with musical expression or interpretation?


KM:  I wouldn't say it's a new discovery, but during my life, especially since I worked on the impact of popular vs. classical music, I became more and more aware of the importance of sound. Take a piece by, say, Bach, play it with different sounds, and you will have different pieces with different characters: with historical instruments – with modern instruments – with electronic sounds – in a pop version with drums. The composition is the same, but it evokes different feelings.

Disclaimer: Opinions expressed in interviews/conversations are of the musician or musical expert interviewed and have no reflection on the mission or beliefs associated with Whole Music Experience. WME is an inclusive blog that considers the music consciousness and effects of several musical genres, including some types of popular music that have proved helpful in music therapy type settings.
Posted by Moon Child at 6:44 PM No comments: