In review--Drums along the Nile 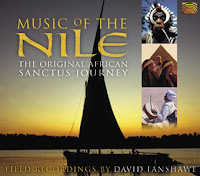 
We need to travel back to 2003 for Music of the Nile when Arc Music released the field recordings of David Fanshawe (ethnomusicologist and composer) and even further for the actual field recordings which were produced from 1969 to 1975.  Then in the 1990s, Fanshawe composed the African Diaspora-European fusion chorale African Sanctus (which you can watch on YouTube).  The composer borrowed heavily from the field recordings produced along the Nile River as it snaked its way through Egypt, Sudan, Uganda, and Kenya.  And yes, Music of the Nile offers both a geography lesson and exploration of music traditions that went the way of the dinosaur.


With nearly 80 minutes of diverse tracks ranging from wedding feasts music to lullabies, to fishing songs, as well as, affectionate songs praising camels in Sudan and cows in Kenya, it’s best to listen to this recording in two or more sittings.  Even though I enjoy listening to field recordings, many of them come off as too academic for the average listener.  Fanshawe’s recording feels more personal because the song catcher shares his personal stories fueled by his emotions he experienced with each encounter.  He also offers a humanitarian gaze while also creating friendships with the African musicians.


All 37 tracks come with a little story and the booklet provides photographs of many of Fanshawe’s encounters.  Seeing the faces of the musicians adds a personal touch.  And with 37 tracks, where do I begin?  The Muezzin Call to Prayer (Egypt, track 2) and the Egyptian Wedding Luxor (track 4) offer nice contrasts between sacred and secular music traditions.  Four Men on a Prayer Mat (Sudan, track 12), resembles a Finish runo-song and I kept picturing the Finnish band Varttina when listening to this track.  The ancient lyre of King David shows up on tracks, 13 and 14.


A bulk of the recording features songs from Uganda and Kenya with plenty of harps, thumb pianos, and even a xylophone type instrument fashioned from turned-over canoes and crates (Uganda).  Since the music on this recording was produced on the spot, sometimes through synchronicity (right place at the right time), the music sounds authentic, and often you hear the natural environment in the background.  Samia Rowing chant from Uganda shows ingenuity as the singers use the sound of the oars rowing as a drum.  In fact, the key word is ingenuity in the form of making music.  We are left with the question why do humans make music.  Humans make music to bond to each other, to build community, to share grief, to celebrate, to acknowledge the spirit world, to make amends and to start a war.  You’ll find all that type of music making on Music of the Nile. 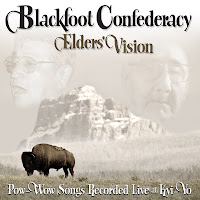 
Indigenous music falls under “purposeful music” so listening to the CD out of context (in my home), doesn't work for me. For instance, I enjoy attending pow-wows, watching the dancers in their regalia dancing to the beat of pow-wow drums and passionate vocals, but listening to the music without the dancing and visuals doesn't work for me.  In addition, I'm a high-strung person who needs to relax so I prefer the Native American flute and softer recordings that closely fit my lifestyle.  (Note, I don't listen to rock music for the same reason).


Having said all of that, I do support pow-wows.  I encourage the pride that Native Americans have for their traditions, culture, languages, and communities.  I admit as a non-Native I don’t get the nuances of tribal drumming and singing.  I wish that I did.  However, I feel moved by the beautiful sentiments to Native American elders and beloved members of the Blackfoot Confederacy who Elders’ Vision is dedicated.  The playing here fits into an older style without the hip-hop and contemporary themes of the younger generations.  These are the type of songs you would expect to hear at a pow-wow, from the grand entries to the different genres of dancing, to contest songs for the singers and drummers, and the outro.  I can visualize the scenarios that match the music.

The drumming on the recording sounds tight and innovative; the singing sounds powerful and hearty.  These musicians stand on the shoulders of the Native American musicians that came before them and they perform with their Native pride intact, which in itself feels deeply moving.  If you attend a pow-wow, this is the type of souvenir you take home with you to remember the excitement, the humor of the announcers, the intense gazes on the young dancers’ faces when they dance for the junior prize, and the heartbeat of Mother Earth.  And if you enjoy listening to pow-wow recordings; this is your tradition or area of cultural research, Elders’ Vision runs 70 minutes.  That’s a lot of pow-wow singing and drumming powerfully rendered by folks who know what they're doing.