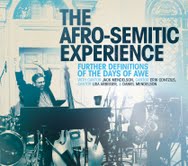 
Outside of the Klezmer tradition, I know little about Jewish music and culture. I think music from any religious tradition reaches more people when it undergoes modernization and innovations. This is no exception with The Afro-Semitic Experience recording Further Definitions of the Days of Awe which incorporates musical styles outside the Jewish realm such as tango, rock, Afro-funk, and salsa.  However, with so many diverse styles traipsing in and out of the studio and live performances featured on this recording, in my opinion, the overall production feels cluttered at times.


The musicians bring passion and enthusiasm to this collaboration which includes old school cantors jack and Daniel Mendelson and in the live performances, cantors Lisa Arbisser and Erik Contzius along with horns, percussion, woodwinds, and keyboards.  The opener Ashrie, Part 1 sounds haunting and traditional, but Ashrei, Part 2 falls into funk and jazz.   Mitzratzeh B’Rachamim features heartfelt vocals as the vocalist laments over a lush musical backdrop.  Adoshem, Adoshem, Part 2 heads into salsa territory with its Cuban-style percussion and splashy horns.  And all 12 tracks give listeners something musical and holy to ponder.


The album with its September 13 release date coincides with the Jewish High Holy Days starting with Selichot and ending with Yom Kipper, “the holiest day of the Jewish year,” according to the liner notes.  However, with any music hailing from a religious tradition outside of my experience, all I can say is thanks for sharing and exchanging culture.  And as in most cases, I listen to this music out of context. The compositions and arrangements stand out and the musicians perform to their hearts’ content.


http://www.rockscissorpapers.biz
Posted by Moon Child at 11:51 AM No comments: 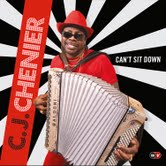 
The title of C.J. Chenier’s new zydeco recording, Can’t Sit Down sums up my body’s response to this rousing music.  The first time I listened to the CD, I popped it into my portable player while riding the bus.  While I didn’t get up and dance the boogie woogie, my feet were tapping so hard that other bus riders turned around to see who was causing the commotion.  They responded to my large grin with gawks and puzzled looks. So I’d like to thank the son of the legendary Clifton Chenier for waking my body up after a long and exhausting day.


If you seek traditional zydeco in its purist acoustic form, you won’t find that here.  C.J. blends rhythm and blues (listen to Timothy Betts electric guitar solos on most tracks) with zydeco accordion and rhythms.  The oddest instrument that appears on the recording is an African kalimba which opens the Tom Waits’ classic Clap Hands and the most familiar instruments to zydeco fans are the accordion and the washboard.  Old world music clashes with modern sensibilities and pretty much everyone is rocking on this disc.  Standout tracks include chestnut Please Don’t Go, the exotic version of Clap Hands and Curtis Mayfield’s We Gotta Have Peace which closes the recording.


You’ll also find covers of John Lee Hooker, Boozoo Chavis/Eddie Shuler and Clifton Chenier with the remainder of the recording featuring originals penned by C.J.  All the songs flow into each other and alert bodies that there’s a party going on somewhere.  If you’re feeling down in the dumps, you’ll want to give this CD a whirl in your player.  And who knows, you might catch yourself hitting replay.


http://www.worldvillagemusic.com  and http://www.myspace.com/cjchenier
Posted by Moon Child at 11:16 AM No comments:

In review--The Lord of the Rings Returns


I’m a closet fan of The Lord of the Rings series, both the movies and the books. When I saw a CD for a symphony, adapted from the film score for LOTR, I jumped at the opportunity to review the CD. I’m listening to disc 2 at the moment, and listened to the entire symphony yesterday. Memories from the movie in the form of emotions flood my brain as I listen to the score.


Similar to another fantasy classic, Star Wars, J.R.R Tolkien’s classic promotes the triumph of love over fear or good over evil. Innocent characters (Hobbits) go on a quest for a power object that had fallen into the wrong hands. This quest goes on through a series of books, or for those who just watched the movies, 12 hours of cinema with a glorious music soundtrack. And it amazes me just how powerful this score is since I’m sure it propelled the action and emotions along for those 12 hours of viewing. Like any great movie score, think Gone with the Wind, Casablanca or Star Wars, the music along with images shapes our perceptions not only of the world we watch on a large screen, but also the “real” world in which we bring back the movie’s message.


While I’m not going to get into movie music entrainment, I will say it plays a huge role in how we shape our reality. In the case of The Lord of the Rings Symphony, I’m experiencing the images of the books and movies over again. I’m pondering the theme of love’s triumph and the rebuilding of a world that was lost to war, chaos, and greed. The timing of the release of this symphony seems perfect as we contemplate the coming events of 2012 and beyond. This score is so powerful that movie images I saw over 10 years ago resurface in my thoughts. Few movie scores do this for me outside of the score for The Red Violin, a Canadian movie, I also watched over 10 years ago.


If you’re a LOTR fan, then you recall this lush score sung in fantasy dialects and English. You recall the clashing of metal during the battle scenes, the underworld voices of the trolls and elves, and the innocent romps of the hobbits. In this score you can hear hearts breaking, relationships ending, and fear of the unknown approaching. You can hear hope and despair, and the joy of old friends reuniting. The orchestra music too is unusual, in that it features pan flutes, Irish whistles, and accordion along with the usual western orchestra instruments. A boy choir brings a touch of innocence and the center pieces are songs performed by the dynamic soprano Kaitlyn Lusk, who has had a go at this symphonic work many times over the years. Just hearing her unleash “Into the West” causes the eyes to grow misty.

Imagine condensing 12 hours of music into a 2 hour symphony (not sure the exact time), and catching all the high spots. The score composer Howard Shore did a bang up job with this symphony. And conductor Ludwig Wicki and the 21st Century Symphony Orchestra (specializes in performance of movie scores), deliver a timeless and magnificent concert of a well-loved classic. Sure this CD eats up hours of my listening time, but I’m enjoying revisiting a favorite epic. Hit replay and let your mind wander to another realm.