The laws of synchronicity work efficiently in my life. Two weeks ago, I pulled out Anonymous 4’s Portrait because I was craving ethereal polyphonic chants. Then I received an e-mail release notice from Harmonia Mundi announcing a new Anonymous 4 recording. Four Centuries of Chant, though is a compilation archives monody or plainsong chants that appeared on previous albums. While this quartet is mostly known for its vocal polyphony, the 20 plainsong chants (which includes work by Hildegard von Bingen, Tavener, along with medieval, renaissance chants and Hungarian Christmas music), deserve attention.

These chants were culled from An English Ladymass, The Lily & The Lamb, Miracles of Sant’Iago, A Star in the East, Hildegard Von Bingen—11,000 Virgins, A Lammas Ladymass, The Legend of Nicholas, 1000: A Mass for the End of Time, Darkness into Light, and The Origins of Fire.

Susan Hellauer cited in the liner notes, “In 1986 when Anonymous 4 first began singing together in New York City, it was not common for vocal ensembles performing early repertoires to program chant or explore how to sing it. For us, however, it was clear that medieval plainchant was as artistically as important and esthetically rewarding as medieval polyphony.”

Anonymous 4 is not the only vocal ensemble, or even female vocal ensemble these days to perform plainchant. The Scandinavian Trio Mediaeval also performs plainsong chants along with polyphony. However, Anonymous 4 has made a name for itself among early music fans and also within the new age scene, for good reason. The Anonymous 4 women sing with bell-like clarity and listening to their repertoire feels like a sacred, if not, religious experience. The women also offer intriguing programs on their recordings.

Certainly, Four Centuries of Chant deserves to be in an early music collection. Similar to the clean lines of baroque music, Gregorian and plainchants offer a linear listening experience that is easy on the brain, ears and flows straight to the heart. These chants act as a backdrop for meditation and other spiritual practices, as a beautiful background for a relaxing moment with a cup of tea and act as a perfect balm at bedtime. I even enjoy waking up to these chants and starting my day on a high soprano note.

The Philadelphia Inquirer described this music as, “Aesthetic bliss and technical perfection.” And certainly this recording invites new listeners to the realm of plainsong chants and welcomes back those already in its throes of passion.

Harmonia Mundi
Posted by Moon Child at 8:38 AM No comments: 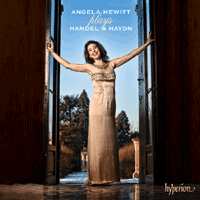 
In the past I have listened to award-winning Canadian pianist Angela Hewitt’s Bach recordings, which I found as delicious as the Bach interpretations of the late Glenn Gould (also Canadian). So when I put the Handel & Haydn CD into my player, I thought I was listening to Bach. I even pulled the CD out of my computer to make sure that Hyperion had not made a mistake and accidentally put a Bach recording in the jewel case. They had not.

I read Hewitt’s liner notes in which she discussed the similarities between George Frideric Handel’s Suite No 2 in F major and Bach’s repertoire. “If you play this for somebody without telling them who wrote it, I bet the last person they would name would be Handel. Many would say Bach.”
I would say the same about Chaconne (with 21 variations) in G major, which Hewitt opens the recording. But why should any of this surprise me? Handel and Bach were contemporaries, both of Germanic backgrounds, performing Baroque music. However, I would never have mistaken Handel’s Messiah for any of Bach’s church compositions.

Hewitt has performed the work of diverse composers ranging from Bach, Chopin, Granados, Messiaen, Ravel, Couperin and others. Similar to Gould, Hewitt has excelled with her performances of Bach’s keyboard work and has won prestigious competitions such as the Toronto International Bach competition and a top prize winner in the Bach competitions of Leipzig, Washington DC and the Dino Ciani Competition at La Scala, Milan. I am hearing the ghost of Bach on the first half of this CD.

When Hewitt shifts directions with Franz Joseph Haydn’s Sonata ‘Un piccolo divertimento’ (Variations in F minor), I hear the ghost of Beethoven. Not that this should come as a surprise either since Beethoven was once a student of Haydn. Hewitt plays all of these works so beautifully, seemingly effortlessly as if her fingers float over the keys of her instrument. She ends the recording with Haydn’s Piano Sonata in E flat major and the entire recording acts as a celebratory offering to both Handel who celebrates his 250th anniversary and Haydn who celebrates his 200th anniversary in 2009.

I personally have found this recording uplifting and sensual. Hewitt’s playing enchants my senses and still allows me to focus on my work, which these days, involves a lot of details. I have found this recording also relaxing at bedtime and it plays as lovely music in the background while I read. I would imagine too that this music would act as a healing balm on many occasions. And who does not love beautiful music expertly rendered by one of the stars of classical music?

Posted by Moon Child at 9:38 AM No comments: