In Review--Round Up of Rousing Songs 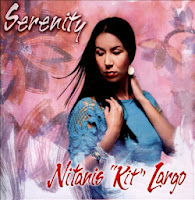 Sometimes I wonder why so few Native American woman musicians record albums or why labels release few recordings by Native American women.  I would love to see women pow-wow drumming and vocal groups, and more in Native American women musicians such as Joanne Shenandoah, Sandy Scofield, Mary Youngblood and Sharon Burch, personally.  So I can’t tell you how pleased I am to review First Nation vocalist-songwriter Nitanis “Kit” Largo debut solo album, Serenity.

Largo has been around for a while, singing with the First Nation pow-wow group Bear Creek (also mentioned in this review round-up) and you’ll hear her vocals gracing the albums of Alex E. Smith and Cheevers Toppah.  On Serenity, she arranges the songs, provides lush harmonies that make your knees quake or give you goose bumps from their beauty and she partners in duets with some of the finest male voices in Native American music today (Alex E. Smith, Randall Paskemin, Wayne Silas, Jr., and Algin Scabby Robe (Blacklodge Singers).  She doesn’t just sing a cappella on some of the tracks, but she layers her voice creating a sound scape that feels amazingly touching and maternal (no doubt new motherhood has something to do with this).

The album opens with loons calling in the long distance and the titular track feels like a spiritual invocation.  I’m reminded of Sandy Scofield (First Nation vocalist and songwriter). Winter Dream, as straight pow-wow song slowed down and softened quite a bit reminds me of Enya and other new age singers.  We hear Largo’s impressive vocal range (emotions, depth and range).  On the duet Please Don’t Go by Randall Paskemin, she teams up with Paskemin on vocals and we hear the ghost of Elvis Presley.  Home Sweet Home with Alex E. Smith offers us some of the most passionate vocals on the recording, while A Marine’s Love (Largo’s husband is a Marine) offers tenderness and Euphony takes us back into new age territory, makes a wonderful crossover song. 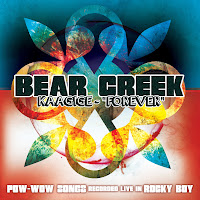 And for those of you who would like to hear Largo rock out, check out the First Nation pow-wow group Bear Creek’s Kaagige-“Forever” which brings you 56 minutes of pow-wow drums and power vocals.  In fact, while I listened to this CD yesterday, the concept of Native American rock and roll popped into my head.  And we’re not so far from the mark to call pow-wow music an alternative to rock music since it has powerful drum beats that jumpstarts the heart, and passionate vocals that stirs dancers into a frenzy.  Pow-songs also entertain and bring community together in celebration of cultures and traditions.

Bear Creek performs traditional and original songs while including Side Step and Crow Hop dance songs.  Personally, I’m interested in seeing the Crow Hop performed since Crow is my Totem.  Pow-songs usually fall on the short side, which is a good thing since the vocalists get a workout (not an easy vocal style to perform), with the exception of BC Classic which runs nearly 5 minutes and Live It which runs over 7 minutes and includes Native American whistle.  The drummers and singers honor the Ojibwe tradition and if you’re wondering if the different tribes have their own style for pow-songs, yes they do. But don’t ask me to give you the details because I’m not an expert on these traditions.

When I was a child, we never had the privilege of hearing Native American round dance Christmas songs.  My family sat around listening to Mitch Miller’s Christmas records or watched Lawrence Welk’s family Christmas special until we were old enough to expect more from Christmas songs.  I much prefer the tongue and cheek versions of holiday songs sung by Randall Paskemin and his First Nation family.  I could do without the weasel singers with their chipmunk voices though since I never enjoyed the singing chipmunks. 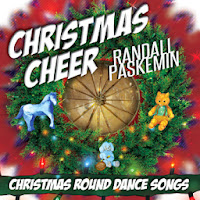 On Christmas Cheer (Christmas Round Dance Songs), Paskemin brings in older and younger family members including his baby girl, Lennyn Paskemin on Baby’s First Christmas. And Paskemin also surprises us by singing an Irish folksong to close the recording with a change of lyrics.  It is the only serious song among animated stories about weasels, relatives, and round dance singers.  Favorite holiday tunes are transformed to embody First Nation or Native American flavors and sentiments such as Rudolph the Rednose Reindeer transformed into The Rookie Round Dance Singer, which had me chuckling.  While I could do without the cute helium voices on some of the tracks, Christmas Cheer is a delightful album to please even the youngest family member. And it is so much better than Mitch Miller or Lawrence Welk.  On that note, happy holidays, everyone.

http://www.canyonrecords.com
Posted by Moon Child at 11:06 AM No comments: