In review--Making a better world 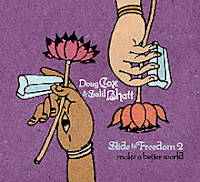 In 2003 I interviewed Canadian bluesman Harry Manx at the Vancouver International Folk Festival. As we sat in the gorgeous Jericho Beach park (Vancouver, Canada), and the sun washed over us, Harry and I discussed his unique blend of American blues and classical Indian ragas. I was also introduced to the music of Vishwa Mohan Bhatt, founder of the Mohan Veena. As synchronicity played its role, I received 2 albums by Vishwa Mohan Bhatt shortly after that, which I enjoyed immensely.

Fast forward to the present where I am listening to Vishwa's son, Salil Bhatt, also a Indian slide guitarist, team up with Canadian slide guitarist Doug Cox on Slide to Freedom 2 (Make a Better World). You'll find nothing short of high-vibrational music on this disc. Blues pieces sung by John Boutte mix with ragas. I especially like the blues piece, I Scare Myself and of course, the rousing For You Blues, penned by the late George Harrison, not a stranger to Indian classical music and a friend of Vishwa Mohan Bhatt. The musicians' rendition of Amazing Grace also deserves a mention.


A mixture of lap-style guitars, Indian slide guitar, tabla, bass and vocals takes listeners to the deep American South or straight off to Northern India. Transcendental moments alternate with earthy ones. And this is one of those albums where hitting the repeat button would be a good option. I never thought I would find blues that cause me to feel this happy.


Classical Indian music also blends with American jazz, as heard on bansuri (flute) player Deepak Ram's Steps. I mention Deepak's CD because Slide to Freedom 2 recalls that CD too. Perhaps making the world a better place revolves around sharing and exchanging musical expression. I know my world is better because of this exchange.

Posted by Moon Child at 3:01 PM No comments: 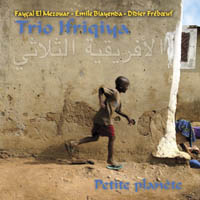 
I have had to listen to Trio Ifriqiya’s Petite Planète several times before reviewing it. To label it a fusion project would do this recording an injustice. True, Algerian Faycal El Mezouar’s Arabic oud, violin, percussion and vocals make a good marriage with Didier Frèboeuf’s jazz piano and the neutral drumming of Èmile Biayenda (founder of Les Tambours de Brazza). However, as the album’s title implies Arab-Andalusian music and jazz improvisations only scratch at the surface of a global musical dialogue that travels from West and North Africa to Spain, to the United States and back again.
A listener can glean a lot from this trio’s repertoire and do some mind-traveling in the meantime. The opener, Ya Qalbi Khelli el Hal delves into those Arabic modes, complete with Arabic vocals, oud, piano and percussion. Hada al Gharam mixes up the jazz improvisations with the Arabic mode with vocals anchored in Arabic scales and the piano and kit drum providing jazz syncopation. The title track leans more heavily towards American jazz, though tinges of Spanish jazz can be heard in places throughout the recording—I am guessing.

For whatever reason, I am reminded of the flamenco-jazz fusion that appeared at the beginning of the documentary Calle 54. While Petite Planète is not a high-octane celebration of Latin jazz, there is something to be said about combining Arab-Andalusian music with jazz. Another recording that comes to mind is Descarga Oriental by Maurice El Mèdioni and Roberto Rodriguez who combined Arab-Andalusian with Cuban music. The moodier songs on Petite Planète recall Spanish players Tarik and Julia Banzi’s Al-Andalus.

Certainly with its complex tapestry of jazz and world music, this recording begs for many listens and even then, it’s a real challenge to grasps the complexity of this trio’s work.

Posted by Moon Child at 4:14 PM No comments: