Whole Music--From Delphi to Egypt, What did the Ancients Know About Music? 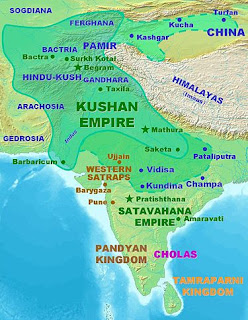 I have a fascination with ancient musicians. I did not grow up with this fascination as it came later in life during my musical quest. When I performed and recorded my songs I wasn't thinking about my musical forebears, at least not past the 1960s. However, once I began exploring metaphysics and testing various music on my body and emotions I began to wonder where it all started.

Here is an exploration found in Chapter One of my unpublished book, Whole Music. If you like this sort of thing and would like to read the whole book, help me either raise the funds to self-published the book properly or find a publisher brave enough to publish this material--that I'm sure the music industry doesn't want you to know. If we all demanded higher vibrational music, then the music industry would have to shift.

Where does human music originate? Were the first humans inspired by frogs chirping in ponds, by the songbirds in trees, from the wind whispering in reeds (which many flutes were made), and the hush that appeared after the sun set below the horizon and stars peppered the twilight skies? We do know that early humans played flutes made from bird bones, drums made from wood and animal skins, and stringed instruments (most likely lyres).  Nature, sounds and the cosmos fused together creating a human sonic experience, in which today, we attempt to recreate so we can usher in thousands of years of harmony.

We know that these early humans employed voice and instruments for a variety of purposes from organizing war campaigns to healing their fellow humans to sacred temples, to assisting with various tasks, for reproduction (frenzied music for orgies), and educating children.  Since music always possessed a purpose, the potential for music was most likely common knowledge, unlike music is today.  While musicians composed and performed music for entertainment, such as with Greek theater and festival games, music often fulfilled a task.  Much of the music we enjoy today has roots in sacred music practices, military marches, healing rituals, or preceded modern reporters, shamans, and educators rolled into court musicians.

Today indigenous people from around the globe still carry on the traditions of their elders.  The Saami people (one of the oldest people on earth), of Nordic countries, still sing the magical yoik, even if the sorcery element has disappeared in favor of praise songs (for the deceased), or fused to rock music for entertainment; ditto for the ancient Finnish runo-song that finds its roots in the “Kalevala Legend”, according to the late Ted Andrews in his book Sacred Sounds, was conceived three thousand years ago.

According to a National Geographic News article, "Lord of the Rings Inspired by an Ancient Epic," first published in 2001, only one Finnish shamanic elder, Jussi Houvinen exists in Finland who understands the healing powers of the epic Kalevala. (Handwerk, 2001, online).

National Geographic News journalist Handwerk reported, "In what was the Viena Karelia region, the oral tradition of the Finnish language is still alive, but now contained in the memory of just a single storyteller. His name is Jussi Houvinen, and he is Finland’s last rune singer. This elderly man is a living link to myths and languages that have been passed mouth-to-ear over the ages in an unbroken chain."

When did we lose the magical side and powerful healing consciousness of music? As dominant cultures moved into regions occupied by tribal people, indigenous people often lost connections to their language, rituals, music, and nature-based healing practices due to dominant cultures and religions enforcing new rules that forbid “animistic” practices, often seen as the devil’s work and definitely uncivilized.

Some cultures such as in Latin America, fused Catholic saints to Yoruba gods (Brazil and Cuba), or lost their spiritual roots completely, but not the rhythms of West Africa (US American slaves whose work songs fostered the birth of gospel, jazz, blues, and early rock music).  Is it ironic that musicians from the Black Church (the church of African-Americans), such as Stevie Wonder, Miles Davis, and the cosmopolitan band Earth, Wind & Fire gazed backward to ancient Egypt, West Africa, and Latin America for spiritual and musical inspiration?

However, ancient Egyptian music with its harps, lutes, rousing drums, and esoteric renderings would have sounded nothing like contemporary African-American music and gave roots to belly dancing and Coptic Christian music, not American funk, or so we think.  Court musicians were often initiated where they were trained in the power of words and sound architecture.  The biggest different between today’s pop musicians and celebrated ancient musicians was that the purposes went beyond entertainment, and these musicians possessed an awareness for resonance and rhythmic entrainment.  They knew about magic, alchemy, and intent.  Contemporary musicians still supply the intent, and instead of alchemy, cathartic music that is often therapeutic given the right circumstances.  Musicians haven’t completely lost the ancient groove.

From Pan’s Flute to Rock Guitar

However, to give you an idea about the evolution of music, let’s look at the evolution of humanity from pastoralists and hunting-gatherers to urban dwellers.  While we find wool-gathering songs or sea shanties quaint, these songs performed the purpose of energizing workers and sailors of another age.  The sung-legends with magical songs educated both adults and children about pre-Christian culture and about alchemy.  Shamanic heroes on quests provided listeners with archetypical healing long before Carl Jung and Joseph Campbell arrived on the scene.

Early Christians had their music too that spread the word of Christ’s teachings and to share “the good news”.  Sufis of the Moslem faith employed trance dancing and sacred poetry to connect with the Divine.  Jewish, Hindus, and Buddhist as well as, animistic religions also included music for worship in temples, for weddings, for meditation, and ceremonial uses.  And if you listen to the modern adaptation of ancient or early music from these religions, you can feel the sacred appearing in the room, even if you don’t practice any of these religions.  Music with intent powerfully impacts our hearts, minds, and souls.  As we listen to Persian Sufi poetry set to Iranian classical music, to ragas of India, or Native American sacred chants, or American gospel, we pay homage to a Universal God; we connect with the rainbow of humanity and all creatures.

Even without the funding in place, I launched the Whole Music Channel on YouTube. The debut podcast features a conversation with the resident composer and founder of the Vancouver Inter-Cultural Orchestra, Moshe Denburg. We discussed musical exchanges, culture, and the orchestra's new recording Mystics and Lovers.