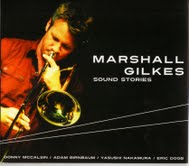 When trombonist Marshall Gilkes’ Sound Stories arrived at my post office box, I had no plans for reviewing the recording in the near future.  I was taking a short sabbatical from reviewing so I could concentrate on other projects.  However, out of curiosity, I slipped Sound Stories into my CD player and the music grabbed me.  The blend of lyrical and be bop jazz played tightly by this quintet begged for a review.  With Gilkes leading, Donny McCaslin (tenor sax), Adam Birnbaum (piano), Yasushi Nakamura (bass) and Eric Doob (drums) through both composed-through and improvisations, this album showcases a great deal of jazz talent.  Who doesn’t enjoy the alchemical process of music? A little bass, drums, toss in piano, and an extensive conversation between tenor saxophone and trombone, and you have a recipe for a jazzy escape.

The ironically titled, Anxiety--Part 1 and Part 2 did not bring on neurosis and in fact, I felt relaxed listening to these two pieces.  Part 1 featured sweet innuendos whispered between the sax and the trombone.  Part 2’s jaunty opening features a bass-drum-piano groove with the horns gliding over top.  The instrumental ballad Downtime offers a romantic respite with the spotlight on Gilkes’ trombone, sounding trumpet-like.  Am I hearing shades of Miles Davis?  Armstrong-Parts 1 and 2, feature be bop (slow and fast).  The album closes with the lyrically splendid Thruway with Doob’s soft brushstrokes on the cymbals and the Gilkes trombone serenading McCaslin’s saxophone, sometimes singing in tandem.--Highly recommended for jazz seekers. 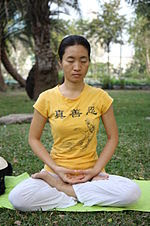 If you choose to have your day go smoothly, then start your day with music, not the morning news (unless you wish to pray all day for what you hear in the news).  Now, that you have kept a music journal and you have an idea of how music affects your moods, it's time to set aside 20 to 30 minutes each morning for deep music listening.  You can listen to music through headphones if you don't want to wake others up, but keep the volume low so you don't suffer from hearing loss--ringing in the ears is not fun.

1). Tune into your emotions and choose the appropriate music for releasing unwanted emotions or enhancing desired feelings.

2). You can choose different songs from different recordings or play consequitive tracks off of a single CD.  You can even listen to music you store on your computer or other devices.

3). Sit or lay down quietly with this music, removing all distractions.

4). Similar to sitting or walking meditation, watch your breath and also your heart rhythms as you listen to this music.  Follow your breath and heartbeat as it entrains to the music.

5). If your mind tends to wander and you feel like daydreaming, keep your daydreams positive, imagining what you want in your life, not what you don't want.

6). If your thoughts are strongly negative and your emotions too strong, then stop the music, and do a few rounds of Emotional Freedom Technique or something similar.  Then return to the music listening.

7). Once you complete your meditation you might wish to continue listening to music for yoga or dance purposes.  This is fine, but take a pause in between the music so that you can digest the previous music. It's like when your mother tells you to leave room for dessert.  Leave a space in between music, especially different kinds of music. If you don't do this you might end up with a strange collage of music stuck in your thoughts for the remainder of the day.

8). End with expressing gratitude for the music, the musicians, and the intimate time you had with both.

In review--Impressions of Multicultural Quebec 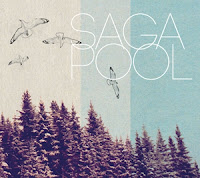 Similar to the French music collective Lo’Jo, Quebec’s Sagapool collectively represents a multicultural stew on its self-titled album.  However, as mentioned in the press notes, Sagapool performs meditative music.  Not to confuse meditative with new age, this sextet lead by clarinetist Guillaume Bourque musically ponders the Great White North, and oddly sounds like Finish or Norwegian folk music.  Sure, the musicians toss the words Klezmer and Balkan around in the band’s description, and we do hear an Eastern European gypsy tinge, especially on an upbeat song Marcel, which sounds like the circus rolled into town.

However, I can draw comparisons between this Quebecois band and European musical acts, but by the end of the day, the best descriptor is original.  Now, I’ve never traveled to Quebec so I am left with a mystical description of the place--some far off land, bordering the US and the Arctic where French language and culture rule the day.  This isn’t Quebecois music that I am used to hearing, but it is something classical, pastoral, and impressionistic.  Sagapool manages to draw on European influences while bringing this music to the snowy climes of Montreal, reminding me of Finland, of all places.  Sagapool has more in common with Frigg or Maria Kalimeni than the big names of acoustic Quebecois music.  Take a listen to Dù, for instance, with its slow klezmer accordion, clarinet, and battery of drums or the contemplative opener, with a title of longitude and latitude coordinates or the slow piano chanson, Entracte.

Today with so much traveling and musical exchange, music bleeds through genres, leaving journalist such as myself scrambling for descriptors.  In the end, I say just pick up the CD and you decide.  Similar to a good fantasy writer, Sagapool creates a world within a world, and if you don’t drop breadcrumbs along the way, you might end up getting lost in the woods of Quebec.

http://www.coopfauxmonnayeurs.com and http://www.rockpaperscissors.biz
Posted by Moon Child at 12:00 AM No comments: