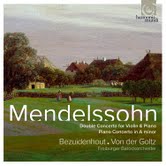 
Dubbed the Mozart of the 19th century by Robert Schumann, imagine that Felix Mendelssohn Bartholdy (1809-1847) composed his Concerto for Piano and Strings in A minor when he was 13 and his Double Concerto for piano and violin the following year, prior to composing his famous overture for Midsummer Night’s Dream.  Much of the Bezuidenhout, Von der Goltz and Freiburger Barockorchester’s performance of these compositions sounds like Liszt, Rachmaninoff and Paganini rolled into one and sprinkled with Bach and Mozart.  This recording, a rare treat by any standards, easily ends up on my top 10 classical recordings for 2011.  The passion on the disc alone can heat my home.


The recording opens with the Concerto for Piano and Strings features the balanced architecture of Bach and Mozart with the fire of Romantic era composers, in which Mendelssohn was included.  This delightful finger-twister bounces back and forth between early and classical music idioms and Romantic passionate outbursts.  The music here is light in comparison to the brooding Beethoven, but as challenging and in –your-face as Liszt and Paganini.  The first movement runs the gamut of tempos and emotions as first movements of concertos tend to do.  The second movement, adagio features breathtaking piano reminiscent of Mozart’s piano concertos.  This is the same for the Adagio movement of the Double Concerto for Piano and Strings.
Throughout the disc we can hear Benzuidenhout’s virtuoso piano, but the second concerto on the disc also features Von der Goltz’s bold and courageous violin.  Hearing these two players together is my definition of heaven.  The double concerto hit me over the head in some ways and caused my heart to race due to its intensity, not quite Rachmaninoff, but blazing with passion just the same.  During the first movement of the double concerto you can almost see 19th century women swooning and sighing in a concert audience. After the opening the intensity increases when the orchestra enters.  The piano and violin engage in a tit for tat and a horn joins this conversation.  Moods shift at a rapid pace with quick passages alternating with pastoral scenes.  Mendelssohn not only packs in diverse emotions in this opening movement, lasting just over 18 minutes, he proves his cleverness in his orchestration involving horns, flutes, strings and woodwinds.


The second movement—Adagio brings in those early music influences again. The piano ripples underneath the violin that climbs up to the high register and the subdued strings contribute to this relaxing movement, ending on a satisfying chord.  But then the third movement—allegro molto quickly picks up the tempo and the orchestra performs bolder strokes.  I think it would be delightful to watch virtuosos perform this concerto.  By the time it this movement and the entire recording ends, I feel that it will resonate with my body for hours if not days.  I find this disc wholly satisfying like a delicious four-course meal at the end of a challenging day.  I’m left wondering why Mozart has received more press and attention than Mendelssohn when this child prodigy also contributed otherworldly music to the planet.  I know I’m a Mendelssohn enthusiast now.

Just a note on an observation from the other day.  I walked through two different scenarios.  The first one, I walked through the Bellingham Farmers Market and felt a good vibe from street musicians performing on acoustic instruments, different types of traditional or folk type music.

The second scenario, I walked through (as quickly as possible), through the food booths set up for the Taste of Bellingham festival and felt assaulted by a psychedelic grunge band.  Knowing what I know about music entrainment and resonance, not to mention, the best music for food digestion, it baffles me why so many people are still unconscious about the effects of sound on their bodies.

While I wasn't going to stop in the middle of the street and preach to deaf ears, I knew that I wouldn't be stopping by any food booths along that street and possibly missing out on supporting a good cause. The mixture of hot sun + crowds + food diversity + driving music would have lead to an upset stomach and headache.

Ironically, I passed by a quaint chocolate cafe where I heard classical guitar music filtering out onto the street.  Now, that felt inviting and the owners of that chocolate shop must have had some knowledge of creating the right ambience with music.  Perhaps there are more music conscious folks than I imagine.

Posted by Moon Child at 1:24 PM No comments: