As I mention in my book Whole Music, when I was a child I fell in love with timbre and the voices of the individual instruments we listened to in music class.  Each instrument conjured a specific emotions or feeling in me.  The French horn caused me to feel majestic and the cello invoked melancholy.  My moods would shift with each instrument that I heard and my moods would shift quickly.

Today, I listen to more than timbre, but I have an understanding of how tone, frequencies of the tone and timbre (the color of the tone) affect me on all levels.  And I wonder what listening to an entire symphony does with its many voices, themes, keys, musical passages etc... In the concept of "whole music" I prefer not to separate musical components, but in the case of this post, I will present solo instruments for your listening and feeling pleasure.

The mood, theme and arrangement of the song will play roles in the effects on your mind-body-spirit.  However, pay close attention to the instrument's voice.

1. Solo oboe (not easy finding a lone oboe on YouTube, but here's one video)

5. Trumpet (this is a short documentary on trumpet) 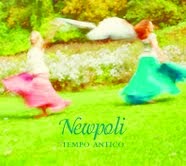 World
Newpoli
Tempo Antico
Beartones
My first impressions of the Italian Tarantata folkloric tradition came from grainy video footage of Italian women spinning in a trance caused by the bite of a tarantula spider. I experienced my second impression of Tarantata when Alessandra Belloni’s Dance of the Ancient Spider (Sounds True) showed up in my mailbox in 2006.  At that point, I gleaned the wisdom of the true purpose of this ancient ritualistic dance and the rousing songs that accompanied the frenzied dance (to heal women’s sexual issues and repression).  While the dance and songs explore healing components, you can also find the tradition presented as folkloric music in concerts and on recordings.
The founding members of Newpoli explored their Italian culture after arriving in the US to study jazz at Berklee College of Music.  On their third recording Tempo Antico, the musicians travel as far back as the 1500s where they dug the roots up of some early music gems.  The musicians led by the dual vocalists, Angela Rossi and Carmen Marisco perform on folkloric and early music instruments from Italy.  We feel like we are enjoying the Italian renaissance at times and at other times like we’re observing a folk ritual that dates back hundreds if not thousands of years.  We hear passionate vocals singing irresistible melodies over exotic lutes, violin, frame drums and the Italian oboe (ciaramella).
Listen to the lively Trapanarella which hops and skips along or the hypnotic Pizzicarella or the ballad, Funtana che ddaje acqua which sounds like it hails from an Italian renaissance courtyard. As we listen to this recording we engage in time travel, darting between the Middle Age (Amore Amore) to the early 20th Century (Dicitencello Vuje) with the bulk of the songs hailing from the 16th and 17 centuries.  Certainly, the musician’s scholarly efforts deserve applause as does the beauty of their performances on this recording.

https://www.youtube.com/watch?v=BoWjMK93Lv8
Posted by Moon Child at 11:15 AM No comments: