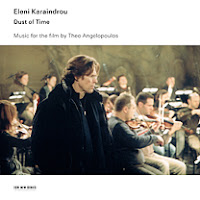 
It seems like yesterday that I reviewed a collection of movie soundtrack music, Elegy of the Uprooting by Greek pianist/composer Eleni Karaindrou. But in actuality that was over two years ago. Karaindrou's delicate melancholic music goes beyond moving scenes forward and evoking the emotions of the film's characters. Karaindrou lends an expert hand at orchestration and musical arrangements that would leave French Impressionistic composers such as Ravel and Debussy green with envy.


On the soundtrack music for Greek filmmaker Theo Angelopoulos' Dust of Time, once again Karaindrou brings her musical awareness to each piece of music, from the lilting Waltz by the River with its combo of harp, violin and accordion to a Eastern European tinge throughout. Oboe, harp, French horn, accordion, piano, bassoon and other instruments pepper strains of orchestral strings, you might even say, small banks of strings. The ensemble arrangements set many moods that would have enhanced the performances of the film's stars, Bruno Ganz (Wings of Desire), Irene Jacob (Kieslowski's Three Colours Rouge, Double Life of Veronique) and American actor William Dafoe.


Now, I have not been anywhere near a film festival in years so I missed Angelopoulos' Dust of Time, though I have seen other films by the Greek director in the past. If you are like me you can always peruse the film stills in the liner notes and see the aging process of Irene Jacob. The movie revolves around an era which starts with the death of Stalin (1953) and ends with the fall of the Berlin Wall (1989). Judging from the brief description in the press release and the stills in the liner notes, I am guessing that Angelopoulos has explored one of his favorite themes, that of the displaced person and separation from homeland as well as, loved ones.

Movie music has a hit or miss quality as far as healing potential. Many movie soundtracks have too wide a variety of genres for relaxation purposes unless the soundtrack is all traditional, all jazz or all classical. Dust of Time sets subtle moods through classical orchestration and arrangements. These moods could work wonders in trying to move some stuck energy in regard to separation, alienation and loss of homeland or plain old grief.


In contrast, the music here is so beautiful that it could also help a listener relax and soak in these delicate arrangements. French horn emboldens, harp relaxing and accordion uplifts. I am pleased with this recording from the opener to the closing track. Some highlights though are the Dance Themes Variations, including Variation I with its inclusion of bassoon and French horn.


And if you enjoy this recording, Karaindrou has a catalogue of her soundtrack music released on ECM New Series.