In review--While my sitar gently weeps 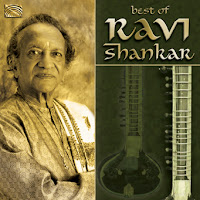 
I’m sitting here listening to Raga Mian Ki Malhar which tells a story in a way about the roots of India’s musical dynasty.  Each Indian classical raga corresponds with a season, time of day, or mood.  This particular raga, which moves at a slow to medium pace, represents the rainy season and I’m thinking about the appropriateness of listening to a monsoon raga as I watch late winter rain fall here in the Pacific Northwest.  My mood matches this raga’s sentiments, but at least the late Ravi Shankar gives such a fiery performance on the compilation The Best of Ravi Shankar that by the end of this raga (which does pick up speed and intensity in the way that a stream picks up velocity to become a raging river), I feel invigorated.


I’m not a Ravi Shankar or Indian classical music scholar, but I'm someone who enjoys international music on a regular basis and who has over the years grown to enjoy Indian ragas immensely.  I have utmost respect for the late sitar master and despite his brilliance and musical prowess, Ravi Shankar’s music remains among the most accessible of Indian classical music from an older generation of musicians.  And if it wasn’t for Pandit Shankar’s past efforts to bring classical Indian music to the West while also educating western audiences about the subtle nuances and not so subtle aspects of Indian classical music, I doubt I would be sitting here enjoying these ragas.  Even in his early 90s, the man was on musical fire and I can feel his big spirit as I listen to this recording posthumously--in retrospect.  He left an enormous legacy in his wake which we'll sift through for decades to come.


While it’s hardly midnight, I’m now listening to Raga Kaunsi Kanhra, which according to journalist Jameela Siddiqi’s liner notes, is a late night raga.  The journalist goes into further details which will make more sense to someone versed in the Indian classical music tradition in the ilk of a scholar or musician or serious devotee.  I’ve met these fascinating people who can talk beat-cycles and playing styles all night.  As I’m writing this review, I wish their scholarly knowledge would rub off on me.  I feel torn between writing this review and listening to the ragas for enjoyment.  What I can say about Raga Kaunsi Kanhra is that it opens with a contemplative and pensive mood with Shankar playing sustained low notes that if I listened to this raga at midnight, I would soon fall into a deep relaxation.  Siddiqi described the raga as “deeper, more meditational tone.”


The third and final raga, Mishra Ghara Dhun sounds romantic, lyrical, and as the liner notes mention, lighter (in tone).  This “mixed” raga blends classical with folk elements and it reminds me of an instrumental ghazal, if possible.  Shankar’s performance feels sweet and endearing with the pulse of tabla contributing more warmth to the raga.  This raga entices my western ears and fills my heart with joy.  One listen to Ravi Shankar perform Mishra Ghara Dhun could turn anyone in the direction of learning more about Indian classical music--truly delightful.