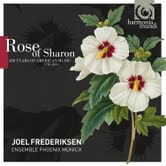 
I often wonder what early American music would sound like, especially since I’ve done my share of listening to early European music.  I expected the fife and rat-a-tat snare drum which you hear on Joel Frederiksen’s The Rose of Sharon.  And of course you would expect renaissance polyphony and baroque influences to play a role which you can hear in the "Father of American Choral Music" section.  The musicians provided extensive liner notes which come in handy and they divided the selections into 6 sections including, "The Battle for Freedom" (which feature religious text) but are related to the American Revolutionary War, "The Father of American Choral Music", William Billings, "Shape Notes and Singing Schools," "Shaker Spirituals", "Music from the Civil War" and "Revival Meetings and Spirituals".


With the exception of The Battle Hymn of the Republic I’ve not heard any early American songs before listening to this recording and the only Shaker tune I had heard was be 'Tis a Gift to be Simple which also appears in Aaron Copeland’s ballet Appalachian Spring.  There’s actually a stunning musical range on Rose of Sharon, from the fife and drum tunes mentioned earlier, to a cappella polyphony, from the jaunty Shaker spirituals to the American baroque pieces with ethereal flute.  While most of the songs feature religious text, songs such as The Army of the Free (Civil War tune) features secular text, though not entirely, then we have the patriotic song Maryland, My Maryland sung to the tune of “Old Tannenbaum” so if you don’t listen to the text closely you think you’re hearing a Christmas tune!  The love ballad Lorena also stands out.


I’m not a religious person so the listening experience of old American ballads and songs needs to offer something else to my ears beyond Christian fervor.  Remarkably Rose of Sharon offers a unique historic perspective of the tunes some of our ancestors sung (not mine though).  It also reveals the bridge between European music and the music of the fledgling United States, during a period between two major wars, the War of Independence from England and the Civil War.  Frederiksen and his ensemble take us back to the birth of a nation, but to its musical roots.  For some folks this journey will delight while other folks will find the journey too full of puritan sentiments.  But with an open mind the journey proves worthwhile.

In review--Harping a Delightful Song 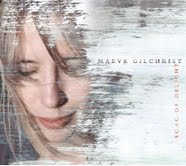 
Harpist-vocalist-composer Maeve Gilchrist brings diverse musical experiences and training to Song of Delight.  Her Scottish background coupled with her studies at the Berkeley School of Music (Boston) act as an intriguing combination. But this of course proves challenging for music reviewers in search of musical references. Certainly I can hear shades of Joni Mitchell who blended the American folk tradition with jazz. I can also hear shades of Catalan harpist-vocalist Arianna Savall.  Gilchrist possesses a sharp gift for melody and coupled with her sensitive and innovative harp playing.  Here Aidan O’Donnell’s string bass pairs up with the high and medium tones of the Celtic harp.  Guest musicians include Mike Block on cello, Darol Anger (also produced the recording), on violin, Joe Walsh on mandolin and Hannah Read on violin which together create a jazz chamber sound.


Falling somewhere between a misty Scottish folk sound and melodic jazz with bits of a pop chanteuse tossed in, the recording is aptly titled.  The text (when I listen carefully) speaks to our more romantic yet intellectual side.  The music provides a lush dreamscape sprinkled by harp and string instruments.  Legend of the Ear comes the closest to marrying Scottish folkloric with American jazz. Gilchrist marries lilting Gaelic with the jazz scat.  It’s a strange conversation that leaves the ears intrigued.  While Gilchrist composed the bulk of songs on the recording, her cover of Stephane Grappelli’s Automne fits like a glove here.  It’s also the moodiest song on the CD, giving “wistfulness” new meaning.


Although Song of Delight introduces me to Maeve Gilchrist for the first time, I have a feeling that this vocalist-harpist has won my heart.  I’m enjoying this recording and already my ears thirst for more from this musician.  Her debut on Adventure Music sounds phenomenal to me, filled with stunning melodies, and intriguing arrangements mixing jazz and traditional Celtic.  I find myself hitting the replay button when the CD winds to its end and the last notes of the harp fade into sunlight.


http://www.adventure-music.com
Posted by Moon Child at 12:10 AM No comments: 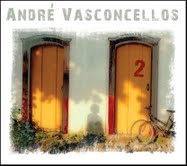 
Even though the press notes for Brazilian bassist-composer Andrè Vasconcellos’ US debut 2 mentions hip-hop and chill influences, the album sounds like lyrical American and Brazilian jazz to my ears.  I’m thankful that I didn’t hear hip-hop influences since that’s not my cup of tea.  I did hear strains of John Coltrane, especially the saxophonist’s Arab phase on the second track, Rome with its snaky chromatic piano. But then it’s not unusual to hear Coltrane influences on jazz albums, especially if saxophone takes the lead, which it does on this album.


I found Balance of Relations too noisy for my taste, but I enjoyed the romantic The Old City Ballad. Bullfight (odd title for this track) offers a respite from the world too with David Feldman’s piano and Joshua Lopez’s tenor sax passing a motif back and forth.  On Puerto Madero the musicians delve into a bossa nova that sounds warm and enjoyable with Renato Fonseca’s piano solo.  The Trip of the Elephant (I’m wondering what influenced the title of this song), also brings in that Brazilian warmth and sensuality, but this time with an Arabic touch. For some reason Charlie Parker comes to mind.


Vasconcello’s debut takes a few listens to sink in because the musicians cover a lot of ground.  They do bring in a lot of influences, but mostly from world music and international jazz.  I guess if anyone desires to chill from this music, they could.  Though I think it’s better to listen with both ears and pay attention to the complexity that reveals itself.


http://www.adventure-music.com
Posted by Moon Child at 12:00 AM No comments: