In Review--Bring Lisboa to Amsterdam 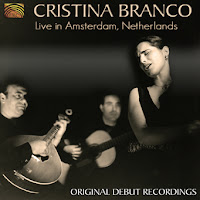 If you’re a fan of Portuguese fado music, then fadista Cristina Branco and lute player-composer Custòdio Castelo are familiar names to your ears.  Arc Music takes us back to 1997 before the fame and before the large musical output of these musicians.  Live in Amsterdam, Netherlands features already mature musicians poised for promising careers.  I’m hearing most of these fados for the first time because I didn’t discover either musician until the release of Sensu in 2003, an album that mixed fado with sensual jazz.

Similar to Mariza, Branco takes the Portuguese music tradition into contemporary times. She has covered Joni Mitchell (Ulisses) and she brought in jazz piano (Sensus).  But the 1997 live album features pure fado with traditional instruments, mainly Portuguese guitar, with crystal shimmering tones accompanying Branco’s emotive vocals.   The album features 16 fados with the first track representing an instrumental that sets the flavor for the live performance.

Although the album works as a whole offering some gorgeous fados, standouts include Quisera lavar o pensamento (in which Branco’s voice sails to the rafters and no doubt caused audience members eyes to mist), the chestnut Maria Fado, (who anyone calls themselves a fado aficionado has heard several times), and the jaunty Saudades de Jùlia Mendes.

Branco has released 11 recordings to date, and I would love to spend a day listening to all the recordings.  Her voice never wears thin, but instead grows from strength to strength.  And similar to her contemporary, Mariza, she finds herself on the cutting edge of fado, representing a new generation of Portuguese musicians poised to introduce the world to saudade.

http://www.arcmusic.co.uk
Posted by Moon Child at 11:47 AM No comments: