In Review--The Vahdat Sisters and a Persian Garden

In 2004 an intriguing CD with the ironic title, Lullabies from the Axis of Evil arrived in my mailbox. Produced by Erik Hillestad for the Norwegian label, Kirkelig Kulturverksted, the recording married the voices of western women with the voices of women from the "Axis of Evil" countries (as dubbed by President Bush in a State of the Union address). The women sang lullabies from their respective countries and while the women such as Lila Downs, Eddi Reader, Sarah Jane Morris, Nina Hagen and Kari Bremnes were the famous names at the time, the vocalists from some of the East countries appear to be gaining international recognition.

KKV also released recordings by the Palestine vocalist and composer, Rim Banna to critical acclaim and now two sisters, vocalists from Iran debut in the West. Similar to Banna, Mahsa and Marjan Vahdat sang lullabies on the Axis of Evil CD and in fact, they led off the CD with their collaboration, Sad Sol--You My Destiny with English vocalist Sarah Jane Morris. Now, you can hear the sisters singing a blend of contemporary and traditional Persian songs on Song From a Persian Garden.

Again, Hillestad comments in the liner notes that the media has acted irresponsibly by turning Iran into a villain country without giving any consideration to the beauty of Iranian arts, spirituality and culture. For someone who has watched my share of Iranian cinema, (most of them banned in Iran due to strict government policies), and who has enjoyed reading the work of Persian poets and listening to traditional Persian music, I embrace the Vahdat sisters' recording. And I believe that we must separate the governments from the everyday people. And if you are seeking a bit of tranquility, you might just enjoy entering this Persian garden, ripe with poetry by Persian masters (Rumi, Hafez) and other gems.

Silk Road instruments such as setar (lute), daf (frame drum), and ney (reed flute), appear along side bass, guitars, drums and keyboards. Again, we have a tasteful marriage between music of the East and the West. Norwegian bluesman and master guitarist Knut Reiersrud lends a gentle hand here with his atmospheric guitar. He even sings, a feminine version of the African spiritual, "She's Got The Whole World in Her Hands," along with the sisters' Gole Laleh. The end result is a moody set of songs performed live in Tehran, during a time when it is against Iranian law for women to sing in public. The sisters broke the ban on public performances by women.

Songs From a Persian Garden promises to delight its Western audiences with its poetic charm, lavish instrumentation and exquisite traditional vocals. The album could lend itself towards cultural awareness, building bridges, or just act as a musical respite for someone seeking something more exotic. And in the realm of global music, let us welcome two more superb women vocalists to the table. These sisters are always welcome at my table.

For more information on this recording and other gems, go to KKV.
Posted by Moon Child at 1:12 PM No comments:

In Review---Terence Blanchard's Requiem for Katrina 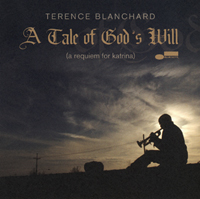 So many natural disasters have occurred after the wake of Hurricane Katrina. Yet, with each storm, each flood, each drought or other catastrophic event, we have the opportunity to further awaken ourselves. We can ask ourselves what we can do to live in balance with the planet. And we also need to ask ourselves what we are willing to sacrifice or jettison in order to live in balance? One thing we don't want to do is to turn our backs to musicians with messages about what went wrong and what could go wrong.

Musically, New Orleans presents us with so many musical legends. The birth of jazz in the hands of Jelly Roll Morton happened in New Orleans. A variety of musical styles hail from New Orleans and when people visit the city, music is one of the main attractions that grabs their attention. But, now the Crescent City has become the focus of dialogues about racism, earth climate changes, poverty, inequities and changes unforeseen by so many. And we are talking about the people still in conversation about the wake of Hurricane Katrina. Others have silently walked away, perhaps shrugging their shoulders or sighing, "oh, what can be done? Anyway, it is in God's hands now." And my response to these people, "you are God's hands."

Trumpeter Terence Blanchard, who hails from New Orleans, and who designed the music that appears on Spike Lee's HBO documentary, When the Levees Broke, is still engaged in conversation about the hurricane aftermath. And in fact, when some of the shock of the event faded, the composer-musician found himself expanding upon his musical themes from the soundtrack which gave birth to his latest recording on Blue Note, A Tale of God's Will (A Requiem for Katrina).

However, Blanchard did not just expand upon a few themes and leave it at that. He invited members of his band to share their Katrina-inspired compositions. And then, in the recording sessions which took place in Los Angeles and at Bastyr University Chapel in Seattle, more magic transpired in the form of, the Latin explosion, Ghost of Congo Square, the beboppin' Ghost of Betsy (another hurricane that struck New Orleans), and the snappy Ghost of 1927, (another hurricane). These short interludes act as the string that holds the pearls, the longer compositions.

And those luscious pearls ripe with human emotions running the gamut between an outpouring of rage, mercy, resignation, compassion, and willingness (to rebuild), present us with some extraordinary musicianship. Blanchard whose horn becomes a treasure chest of the above emotions is joined by Brice Winston on tenor and soprano sax, Aaron Parks on piano, Derrick Hodge on acoustic and electric bass, Kendrick Scott on drums and Zack Harmon on tabla (on Mantra Intro and Mantra). Then an orchestra is brought in to add more color to this vibrant palette.

The recording starts out with Ghost of Congo Square which teases its listeners with images of happier times from New Orleans' past. Levees follows with its heartbreaking and sultry tones. Blanchard's crystal clear notes pierce through any veils of denial. Blanchard's horn playing, ripe with emotion and technically brilliant, recall Miles Davis' work of the late 50s and early 60s. The chamber strings which also add their stinging tears to the mix, join Blanchard's weeping horn. We are now long past nostalgia and into a gut wrenching reality.

But Blanchard does not come across as a cloud of despair nor heavy-handed. He offers up condolences and respect to the residents of New Orleans, while burying the dead on Funeral Dirge. And the album ends with another respectful tribute to the trumpeter's mother who lost her home in the hurricane. She is shown returning to her damaged home in Spike Lee's documentary, (which I have not seen yet).

And while I have taken notes for every track on this recording, I would just like to say, that Blanchard captures on this audio disc, what reporters and cameras cannot capture with their images and verbal narration. As an insider and as a top-flight musician, Blanchard uses a wide range of human emotions that take his listeners deep into the experience of loss, of redemption, and compassion. After all, musical expression is one of the only forms of communication that touches deeply the heart and soul of all creatures. So stay in conversation about how we can live in balance and how we can help in rebuilding a city, while never forgetting to honor the ghosts and lessons of the past.

In Conversation--Archival Interview with Axiom of Choice 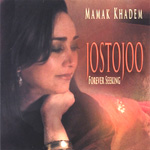 Freedom of Expression: A Conversation with Axiom of Choice vocalist, Mamak Khadem


(This interview was originally published on Cranky Crow Whole Music in 2002. It is one of the articles that led me on the path to exploring the consciousness of music).


For many years I have harbored a growing interest in the healing qualities of music. I had read many articles about the healing properties of Mozart and Beethoven and I had read about music from the celestial spheres, but reading expert opinions is one thing and experiencing the healing effects of music even for something as simple as a cold is another story.