Let's head to Spain and meet the divas of Espana.  If you are of Spanish origins, you will feel proud listening to these lovely voices.  And if you're not, welcome to la musica de Espana.

From classical to flamenco, from Catalan to Galicia and Andalusia, I give you the divas of Spain.  I hope you will explore Spanish music further.

4. Uxia from Galicia (northwest Spain)  What a cool video! 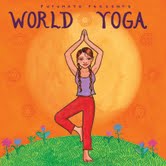 I felt surprised when I received this soothing gem in the mail.  I expected to hear a series of Kirtans sung in a variety of languages, but instead ambient world music greeted my ears when I played Putumayo Presents World Yoga.  The compilation opens with Sona Jobarteh from Gambia humming over a warm acoustic guitar and this short piece invokes our hearts to enter the yogic experience.  Quentin Dujardin (Belgium) follows with more acoustic guitar played slowly with shimmering notes lingering in the air.  It’s funny because until today, I thought the two first tracks represented one song.


And if you’re going to listen to World Yoga while practicing your daily yoga (not a bad idea), you would want the 15 tracks to flow into each other, as you flow from one asana to the next.  Surprisingly, most of the songs hail from the African continent, but also Germany (Deva Premal & Miten), USA, Mexico, Tibet, Sweden, Armenia, Portugal and Wales.  This reminds us that yoga which finds its origins in India, today wears an international face.  I have not heard of the bulk of these musicians prior to listening to this CD, however, for yoga practitioners, Deva Premal’s voice has grown synonymous with yoga.  And now I can think of Geoffrey Oryema (Uganda/France) and Sara Tavares (Portugal) in the same yogic breath.


While I definitely recommend World Yoga for meditation and yoga, you can also listen to this CD in your car to relax after work, or to chill with it after a stressful moment.  I would even recommend slipping this CD into your player before bedtime.  You need this CD so treat yourself.


http://www.putumayo.com and http://www.rockpaperscissors.biz
Posted by Moon Child at 10:57 AM No comments:

In review--Posthumous Beauty (the Van Gogh of Classical Music) 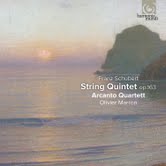 
When I began listening to classical music for healing purposes several years ago, I heard and read little about Franz Schubert, except for a short radio documentary about Schubert during one of his anniversary years.  I had heard snippets of his work, but only recently did I sit down and listen to an entire composition, String Quintet op. 163 performed by the innovative Arcanto Quartett and musical guest Olivier Marron who rounds out the European quintet.  And since Schubert represents a Romantic Era composer, you will hear little restraint, but bursts of passion alternating with tender moments.


I have heard this quartet perform before on previous recordings and I’ve also reviewed cellist Jean-Guihen Queyras’ solo efforts, especially his Vivaldi Cello Concertos (Harmonia Mundi), which I feel fondness.  And similar to some of Vivaldi’s pieces, Schubert’s string quartet feels like a celebration to the senses.  Having listened to the recording several times already, I especially enjoy listening to this CD when I’m working, but also over headphones when I feel like relaxing.  But even, as much as I enjoy this CD, I’m reminded of Schubert’s short life, his genius that went unrecognized during his time, and this contributes a bittersweet element when I listen to this stunning piece of music.  Born in 1797, Franz Schubert died in 1828, leaving a legacy that was only appreciated in hindsight.  However, after hearing this quintet, you will shake your head and wonder what were the people of Schubert’s time thinking?


http://www.harmoniamundi.com
Posted by Moon Child at 10:50 AM No comments: