Music Videos to get your blood pumping, and to inspire your heart...

Often midday we feel sluggish and we feel tempted to take a nap or down another cup of coffee.  However, I encourage you to forgo the caffeine and take a music break instead.  The best way to do this is to start with a slower to moderate beat per minute song and gradually build up to rousing Latin, African, or other high-energy music.  Some of the music traditions from the Subcontinent can also provide you with invigorating beats. Take a 20 minute to 30 minute music break, and at least a 10 minute music break.

You can even take a short trip over to YouTube and listen to the following songs:

Let's start with Habib Koite and Bamada from Mali with a medium tempo with an uplifting melody:

At relatively the same tempo, here is Ana Moura singing an uptempo fado from Portugal

And dance music from Colombia (this is most likely coffee-induced music!)

And if those last two songs don't wake you up from an afternoon slump, get a health checkup from a doctor.
Posted by Moon Child at 9:35 AM No comments: 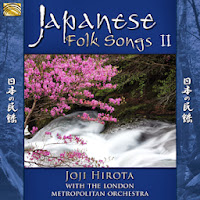 Over the years I have enjoyed listening to a few Japanese traditional songs which I describe as delicate and flowing.  The Japanese folk songs that appear on Joji Hirota’s Japanese Folk Songs II (I liked this CD so much I would like to hear the first volume) remind me of a cultivated garden because the musician methodically arranged each song.  Backed by the strings of the London Metropolitan Orchestra, a Japanese children’s choir on a few of the songs, and embellished with shakuhachi (Japanese flute), Taiko drums and percussion and plucked harp, Hirota provides us with a lush musical canvas that dazzles the senses.


Included on the recorded are two suites (one of children’s songs and another including a lullaby, girl’s handball game song and a ballad), as well as, work songs, love and dance songs from different prefectures or regions in Japan.  Hirota mainly focuses on the Tohoku region of Japan (Iwate, Fukushima, and Miyagi represented).  The liner notes do a wonderful job of providing listeners with origins and purposes for each song, as well as, providing translation of the Japanese text in several languages.  I took copious notes while I listened to the CD over headphones (you hear the subtle nuances better with headphones) and I chose my favorite songs which include, the lullaby with the Otemoyan Suite, the Nambu’s Cattle Driver’s Song which features harp, shakuhachi and passionate vocals and the dance song Akita Ondo with its dramatic drums and rap-like vocals is a kick.  Hirota's original instrumental composition, Hour Glass (about living in the moment) also pleased my ears.


The opener, Shin Soma Bushi features theatrical vocals with plenty of vibrato and ornamentation (Hirota performs music for theatrical companies in England).  The children’s medley which appears towards the top of the CD warms my heart with its endearing children’s choir.  The solo voice on Red Dragonfly touches the heart.  I recommend this recording for listeners versed in folk songs from other regions of the world, especially from Asian countries.  While the melodies are soaring and beautiful, these songs fall best on ears versed in other languages and cultures.  The songs are tender, subtle and sung with embellishments.  The songs also relax and awaken the heart.


http://www.arcmusic.co.uk
Posted by Moon Child at 1:15 PM No comments: