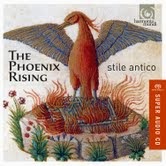 The Phoenix Rising marks the fourth (of seven) recording I have reviewed by the English early music choir, Stile Antico.  I enjoy listening to performances by these critically-acclaimed young vocalists, who like Seattle’s Tudor Choir focus on English composers of the Tudor period or at least they do on this recording.  The main feature of this program revolves around William Byrd’s Mass for Five Voices which is interspersed with polyphonic compositions by Byrd’s contemporaries including Robert White, Orlando Gibbons, Thomas Tallis, Thomas Morley and the final piece by John Taverner (O Splendor gloriae).  Besides, Byrd’s Mass for Five Voices, the vocalists also perform Byrd’s well-loved Ave verum corpus which opens the recording--sounds marvelous.

Although this work comes from a dark period in English history, the Christian Reformation, and the text focuses on Christ’s bloody death on the cross, the vocals presented here sound bright and gentle in spirit, especially on Byrd’s solemn Agnus Dei which concludes his mass.  And since I’m not Catholic, my first taste of renaissance polyphony came in 2006 when I wrote an article on early music choirs in Seattle.  Health wise, I find merit in listening to the carefully constructed vocals of the polyphonic compositions. The choral music feels relaxing, but is still too stimulating as far as musical architecture, for anyone to fall asleep listening to it (though I suppose this is still possible).  The voices, which will sound angelic to most listeners, take us to a deep sacred place, no matter our spiritual practice.

Stile Antico provides us with centuries old music sung by young vocalist who toured with Sting during his Labyrinth CD promotion.  Similar to Seattle’s Tudor Choir, these vocalists will attract older and younger audiences to renaissance polyphony as well as, the next generation of singers.  However, if you still need some convincing, take a listen to the closing track, O Splendor gloriae (John Taverner) which offers approximately 13 minutes of wall-of-sound pleasure to your ears.  Call the CD a masterpiece, it's certainly masterful and more than worthy of musical attention.

http://www.harmoniamundi.com
Posted by Moon Child at 4:40 PM No comments: 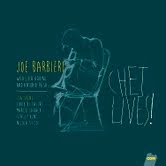 
For anyone familiar with the history of American jazz will have heard the name Chet Baker.  I had heard the name, but had never officially listened to any of Baker’s iconic songs.  A trumpeter and vocalist, Baker focused on lyrical jazz which he sung with sedated, sultry voice with hints of Brazilian bossa nova.  Sadly, Baker’s story is mostly tragic with his mysterious death in the Netherlands and a drug addiction that plagued him for most of his career.  You would never have guessed this from the brightness of his voice and horn or from the songs he sung.


Italian crooner-guitarist Joe Barbieri along with his trio (Antonio Fresa on piano and Luca Aquino on trumpet and flugel horn), render the spirit of the late Baker by revisiting the songs Baker performed in Italy on Chet Lives! Oddly, with some of the songs delving into bossa nova, I’m reminded of the Brazilian musician Celso Fonseca, who also possesses one of those sexy laidback voices.  While listening to the repertoire on this album which includes Gershwin’s But Not for Me, Cole Porter’s Every Time We Say Goodbye, and the titular track, I’m also reminded of Miles Davis’ Cool Jazz period, especially on the track, Almost blue.


The songs flow at an easy pace, and while there are no send-ups here (livelier songs), the arrangements sound pleasing to the ear, with crystal clear trumpet, and flute on But Not for Me as well as, guest vocals by Márcio Faraco on the same track and Stacey Kent on I Fall in Love too Easily.  Anyone seeking a slow jazz groove that sets a warm and comforting atmosphere will enjoy Chet Lives(!).

Posted by Moon Child at 4:19 PM No comments: