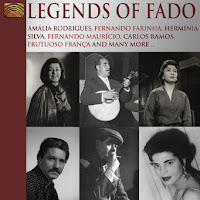 The first fado recording I heard did not feature the new generation of fadistas.   I discovered fado after a music librarian in Seattle referred me to Amália Rodrigues, a name that sounded exotic to my ears in 1996.  Yet, the first CD that I purchased (a scratchy archival recording) featured lesser-known vocalists from the 1920s and 1930s.  I fell in love with the vocals and when I played it for a vocalist (colleague) she glanced at me as if I had lost my mind.  Flash forward to 2000, when I discovered Mariza and no one looked at me as if I lost my mind.  These days fado enjoys worldwide acclaim and while a new generation of vocalists innovate the tradition, they too pay homage to the mothers and fathers of fado.  After all,  a plant can’t grow without its roots.

The compilation Legends of Fado features Rodrigues, of course, but also other male and female fado legends that give Amália heated competition, even if she remains the reigning queen of fado. Listen to the haunting vocals of Maria Teresa De Noronha on Fado do Castanheiro or the joyful voice of Herminia Silva on the song O Dia em que eu Nasci and Argentina Santos chips in the unforgettable performance of Renascimento.  In the men’s camp, Carlos Ramos’ smooth and seductive vocals on the familiar Vielas de Alfama melt hearts.  On Igreja de Sta Estevão, Fernando Maurìco aims to shatter hearts.

With 15 legends appearing on this compilation, Legends of Fado both introduces the tradition to new followers, as well as, reminding us about the roots of the current crop of singers.  It’s also a pleasure to explore the different timbres and interpretations of the vocalists.  Yes, they all sing fados, but similar to the younger generation, these fadistas shaped their own musical fate (fado means fate in Portuguese), by innovating the music of their time.  Every fan of fado needs to pick up this disc.

http://www.arcmusic.co.uk
Posted by Moon Child at 11:03 AM No comments: