Update on the book Whole Music

First, I would like to thank all the wonderful people thus far who have taken the time to do e-mail interviews in the past few weeks for "Whole Music" which includes, Alessandra Belloni, Doug Cox, Michael Pilu Pang, Charlie McMahon, Angel Romero (World Music Central), Jonathan Goldman and Pandit Roop Verma.  Still waiting on responses from Kevin Yazzie for the indigenous music chapter and Vishwa Mohan Bhatt for the Subcontinent music chapter.

I started chapter five and I'm now exploring Gregorian chant, the chants of Hildegard von Bingen, and renaissance polyphony.  I will also include sacred polyphonic chants from Corsica in this chapter.  With chapter six, I'll focus on music between interspecies.

A Hay House Radio intuitive told me to write three pages a day, to avoid writing an academic book and write to a 14-year old level.  While I'm writing three pages or more a day, I have no idea how to write to a 14 year old level since I don't know any 14 year olds and when I was 14, I would not have listened to Gregorian chants and world music.  I guess, I had better just write what I know, how I know it, and those who resonate with the message of the book, will pick it up.
Posted by Moon Child at 8:49 AM No comments:

Music Video Round-up for Second Week of September 2012
Watching music, healing modality, and cultural videos on YouTube is part of my research for my book Whole Music.  I try to give you a wide variety of videos because I realize we come from different backgrounds and make up the rainbow of humanity.  So for this week, we have Indians from India and the American Southwest, as well as, musicians from the African Diaspora, and Benedictine monks.  How's that for variety? 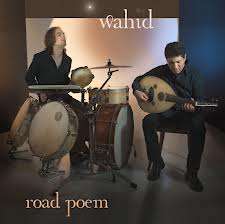 Wahid (Dimitris Mahlis, oud and Chris Wabich, percussion), features a semi-contemporary approach to Middle Eastern oud and Turkish maqam (classical scales and melodies) on the live recording Road Poem.  When I first read about the musicians’ rock and jazz backgrounds, I wasn’t sure what sound to expect.  Too modern of a sound and I would have felt turned off, but when this type of music is played with reverence combined with a pioneering spirit, the result is often mesmerizing.  The playing sounds mature as the musicians wed “Byzantine modes and Turkish maqams” (press notes), on seven original songs.  The album release date is September 25, followed by a tour TBA at www.rockpaperscissors.biz
(Note: This is an unsolicited CD and my policy is that I only review solicited CDs, due to time constraints.  I thought Road Poem was worth a mention so it has a short review).
Posted by Moon Child at 2:30 PM No comments: 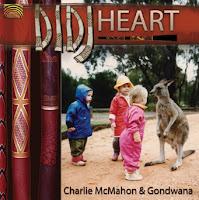 Since Charlie McMahon, mostly known as a didgeridoo player from Australia, granted me a short interview for my upcoming book Whole Music, I’m reviewing his calm recording, Didj Heart.  What I didn’t know about McMahon when Arc Music first referred me to him was that he also works as a music therapist, especially playing didj music for people suffering from autism.  In fact, Didj Heart culminates McMahon’s role as a support worker for ASPECT, a non-government agency that specializes in helping people with autism.  McMahon and keyboardist, Pasko Schravemade, also a NGO support worker, discovered how music helps autistic people with communication.

While I wouldn’t lump Didj Heart into new age music, it shares qualities in common.  Besides offering music therapy for people with autism, I recommend massage therapists picking up this CD for their clients.  The music itself sounds unusual to my ears, moving at a slow to medium tempo, with the didgeridoo playing ostinato and keyboards, strings and guitar riding over the top.  Piano appears on a few of the tracks, including Ninu 2 and all of the songs appear carefully arranged. St. Patrick Reflects features warm sounding guitar with intriguing rhythms played on the didgeridoo, which so far provided both bass and percussion.  However, the coolest song on the recording is the wild and woolly Umpa da da featuring jazzy piano, slide guitar, and rap-like didgeridoo with voice.  Look for the CD with the cover of McMahon’s children conversing with a kangeroo.

http://www.arcmusic.co.uk
Posted by Moon Child at 2:04 PM No comments: