I have done some serious assessment and restructuring of my life and I reached the conclusion to stop reviewing CDs starting January 2014.  Instead of CD reviews, I will concentrate on interviews with musicians and music experts.  I will also continue to include exercises and music research on this blog.

I thank all the musicians and labels who have sent me recordings to review over the years.  I just don't feel like giving my opinion about recordings any longer and would rather interview the makers of music and let them do the talking.

In the meantime, thank you for your continuous support of Whole Music Experience.  It has been a long and arduous road for me and it is your visits to the blog and your support that keeps me going.  Oh, and this continuous music which blesses all of us.

Patricia
Posted by Moon Child at 7:52 AM No comments:

In review--Love Songs for the Tibetan Homeland 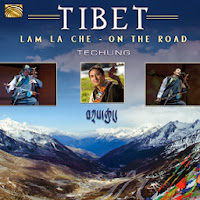 
Many years ago, my first introduction to Tibetan music came when friends and I attended a Tibetan monk choir performance at the University of Washington.  Since that time I have heard Tibetan folkloric, sacred, and operatic songs.  Mostly, I’ve heard new age versions of Tibetan songs by artists such as Nawang Khechog.  Techung (his solo artist name), who now resides in San Francisco where he co-founded Chaksampa Tibetan Dance and Opera Company brings us love, folk and anthemic songs played on traditional and contemporary instruments on his CD, Tibet (On The Road).


The opener, Lok Dro, a contemporary folk song asks Tibetans to return to the homeland.  The universal themes of the text showed up as the perfect song for the Native American documentary, A Good Day to Die, about the Native American civil rights movement.  The song Benevolent India which honors the compassionate neighbors of the Tibetan people, also received a contemporary treatment with bass, guitar and drums playing along side the traditional Tibetan drum (nga), flute (piwang) and long-neck lute (dramnyen). The sweet and beautiful tribute to the 14th Dalai Lama, Lama Khen (My Lama) touches the heart and asks listeners to express compassion.


Undang Lhemo acts as a happier respite performed with vocals, percussion and the plucky long-neck lute. “Like a turquoise bee come from the direction of joy...” Techung sings.  However, the attention-grabber on the CD is Lam la Che which features a poem by Chinese-Tibetan Poet, Woeser, written when she was under house arrest and also includes African-American blues guitarist Keb’ Mo’ on vocals and guitar.  Looking for something upbeat?  Listen to Kipotang (Enjoy), a love song that expresses delight in reuniting with a beloved.


On The Road falls on the long playing side with 19 tracks and many of them short folk or traditional songs performed on Tibetan instruments.  For anyone who has only heard the Tibetan monk choirs and new age productions of Tibetan songs, this album with traditional instruments, jaunty melodies, and the feel of exotic mountains, hits the spot.  Discover another Tibet.

Techung is one of the musicians featured in my book Whole Music.  See Chapter 9, conversation at the end of the chapter.