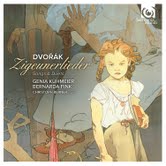 I was not familiar with Dvorak’s song cycles and duets prior to reviewing Zigeunerlieder.  I am familiar with Dvorak’s bigger works and I heard recordings featuring mezzo-soprano Bernarda Fink in the past.  Of Dvorak’s smaller works, this recording features Gypsy Melodies sung by the young soprano Genia Kühmeier and accompanied on piano by Christoph Berner, Moravian Duets with the addition of Bernarda Fink and Biblical Songs sung by Fink and accompanied by Berner, who plays beautifully on this disc.


According to the liner notes, Moravian Duets launched Dvorak’s career and attracted the attention of the esteemed composer Johannes Brahms who at the time was a member of a jury that awarded the Austrian State Stipendium “for young, talented, and impoverished musicians”.  Dvorak had composed the songs originally for his private music students.  True, that singing and playing music was how people entertained themselves, until the invention of the phonograph, television, and radio.  However, I imagine that Dvorak composed these songs for accomplished vocalists.  While the songs aren’t quite operatic, the vocals slide up the high end of the spectrum and offer other vocal challenges.  Nevertheless, these duets stand out as my favorite on this recording.


Finks and Kühmeier’s vocals blend seamlessly while providing delightful harmonies.  The frolics that open this section I Will Escape You and Fly, Fly Little Bird bounce gleefully off the vocalists’ tongues while Water and Tears and The Modest Maiden sound melancholic.  The Ring resembles a musical conversation rather than two vocalists harmonizing.  While the duets captured my attention immediately, Kühmeier delivers robust and earthy vocals on the Gypsy Melodies and Fink delivers soulful vocals on the Biblical Songs, which the Dvorak composed during a dark period of his later years.  Just as with African spirituals and Jewish sacred songs, Dvorak’s Biblical Songs offer a cathartic balm to listeners and most likely, the musicians too.


http://www.harmoniamundi.com
Posted by Moon Child at 12:00 AM No comments: 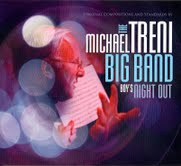 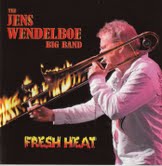 When I think of big bandleaders, I think piano.  Yet, here are two new releases by trombonists leading modern-era big bands.  You won’t find rehashed covers of Ellington or other American jazz legends, but both the Michael Treni 16-piece big band and The Jens Weldelboe Big Band swing low and high.  First, there is Treni who began his jazz career with promise, almost landing a touring gig with Art Blakely that at the last moment fell through leading the musician to a new direction of arranging.   Trombonist Jens Wendelboe, on the other hand, has run the gamut between jazz, pop, and movie soundtracks.  He leans heavily on a strong melody.


Opening with Leonard Bernstein’s Something’s Coming Treni and his musicians provide robust jazz on the album, Boy’s Night Out.  The musical personnel however, doesn’t feature any women jazz musicians in the band, but okay Treni is forgiven.  With the dazzling horns on Lullaby for Birdland that turn around and seduce listeners on Strayhorn (referring to Billy Strayhorn of Ellington fame), to the ethereal flute and strings on In My Quiet Time that converses with muted trumpet, this album  lifts up its listeners.


After leaving his career as a jazz musician back in the 1980s to pursue an entrepreneurship in the audio field, Treni returned full force as an arranger, bandleader and player.  He’s chosen fine group of musicians to collaborate such as Vinnie Cutro (trumpet) and Jerry Bergonzi (saxophone), but all the member of this 16-piece outfit sail a tight ship and swinging to jazz of this millennium.  A real beauty even without any women jazz players.


Big band meets strong pop melodies on The Jens Wendelboe Big Band’s Fresh Heat.  From the snappy opener Joy Spring with vocalist Deb Lyons burning her way through the quick tempo standard.  She returns on My Funny Valentine that she nails vocally speaking, emphasizing the bittersweet sentiments in Rodgers and Hart’s famous song.  The remaining six instrumental tracks sizzle and snap, just as you would expect from the flames searing Wendelboe’s trombone on the CD cover.


The Norwegian trombonist balances originals such as the horn-heavy No Mercy with originals by Rogers/Hart, Clifford Brown, and Joe Henderson’s dreamy Black Narcissus.  Falling Grace opens with a seductive trumpet solo then the saxophones join the party.  What a Trip bounces on its way and the 9-minute-long Suite for Bjorn closes off this steamy recording.  I am not sure what wavelength would cause two trombonist-bandleaders to release albums in April, but for fans of modern era swing, April might just feel happy-go-lucky.


http://www.crazyenergy.com
Posted by Moon Child at 11:38 AM No comments: