The full title of the Goldman’s book, Chakra Frequencies (Tantra of Sound) might give the impression of tantric sex or that the book is just for partners.  However, as the Goldmans explain in the introduction of the book, in the Hindu and especially, the Buddhist tradition, Tantra refers to Unity Consciousness.  If you’re seeking a sexy book, this isn’t it, but for anyone just discovering sound healing or working with chakras, or even practicing sound healers will enjoy the chant practices featured here.  I have encountered the vowel sound and Bija chants in sound healing and voice workshops I took in the past, but I enjoyed the narrative style of the book and hearing about the chants used in practical everyday situations as well as, esoteric ones.


And that’s just it.  Sound healing acts as a wonderful vehicle for exploring and developing greater consciousness.  Many people gravitate towards toning and sound healing practices for that reason or to heal tension and inflammation in the physical body.  However, similar to yoga, sound healing practices lends itself to clearing the mind, relaxing the body and even building the immune system as pointed out in the pages of the book.  Some naturopaths have added sound healing in the form of tuning forks and singing bowls to their practice.  Massage therapists and energy healers have been including these tools in their healing kits for decades.  In fact, my first encounter with tuning forks and singing bowls was when I visited an Oriental Medicine school in Seattle during the 1990s.


However, if anyone chooses to use self-directed sound healing, the Goldmans offer several easy-to-learn practices in Chakra Frequencies for singles and partners.  They also include an audio CD (which I haven’t used yet).  And for those of you who would rather just listen to a sound healing CD instead of doing the toning work, Jonathan has decades-worth of material in the form of CDs on his website. 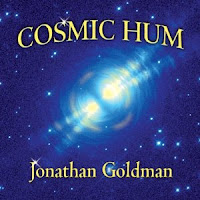 The 2012 CD, Cosmic Hum provides the Universal Frequency which features thousands of voices humming together.  According to the CD cover, the recording also features Sound Healing Cymatic Frequencies and binaural brainwave frequencies so you’re getting the latest psycho-acoustic and sound healing technologies that combine sacred sound healing with new brain science.  I’m not able to hum along with the CD, but I use the CD as background sound to raise my frequency and the frequencies in my home.  I also meditated with the CD which I listened to through headphones with pleasurable results. 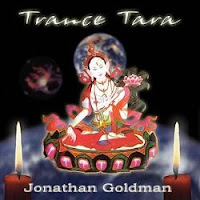 However, I prefer a more active listening CD such as Trance Tara.  All acoustic, choral voices, overtone chanters, tribal drumming and Tibetan singing bowls unite while invoking and evoking the Tibetan Goddess of Compassion, Tara.  This mantra recording centers on the words, “Om Tara, Tu Tare, Ture Svaha” which the chanters repeat for over 26 minutes, thus the trance effect.  Two chants appear on the CD, Tantric Tara and Dreamtime Tara.  The first track is the easiest to chant with and the second chant is ideal for trance dancing.  This recording doesn’t work as background music because the mantra draws listeners’ attention and is participatory.  However, I’ve participated with the recording after a toning session and I’ve also walked around with the mantra playing in head and you would be surprised the positive people and events this mantra attracts.  Not only that, I do feel more compassionate working with this mantra and less judgmental (and having worked as a journalist for most of my adult life, I’m hypercritical).


For anyone wanting to start a sound healing practice, visit the Healing Sound website where you will find more choices than you could shake a stick at.  Jonathan also hosts a sound healing intensive every summer in Colorado.  You can find out more about that on the website as well.