In review--The Pearl of Iran 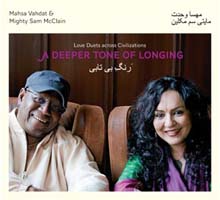 Missing the boat on the duets of Mahsa Vahdat (Iran) and Mighty Sam McClain (US blues) 2009 album, Scent of Reunion, I’m coming on a board with a new album of love duets, A Deeper Tone of Longing.  Featuring Farsi poetry by Mohammad Ibrahim Jafari and English poetry by founder of Kirkelig Kulterverksted, Erik Hillestad poetry almost eclipses the passionate vocals and musical arrangements by Knut Reiersrud (a Norwegian bluesman).  Actually, when you look at the musicians on this album, it feels like KKV brought in the whole team in fusing blues with Iranian classical music--something that looks like an impossible dream on the surface, but succeeds.


When You Came shows off the bluesy side of the equation until a lonely ney (Iranian reed flute) comes in followed by Vahdat’s haunting vocals.  The song even features Reiersrud signature guitar coupled with McLain’s southern back porch voice.  Nobody features a warmer sound with acoustic guitar and jazz drums with folk vocals.  Even though American blues has fused to African blues and even traditional music of India in recent decades, here the two sounds, (blues and Iranian music), appear side-by-side, alternating from one tradition to the other, but never actually wedding to the other.  The singers alternate their vocal tracks, and we never hear vocal harmonies, but we do hear Mathias Eick’s jazz trumpet harmonizing with Vahdat on Nobody.


If it weren’t for the ney shadowing McClain’s voice on Two Jewels intro, we might think we’re hearing Otis Redding.  Then Vahdat delivers heartfelt vocals that send us traveling back to Iran.  That is until the blues harmonica plays peek-a-boo.  And while I won’t give you a play-by-play of the 10 tracks that appear on A Deeper Tone of Longing, stay tuned for some lovely surprises, especially, if you’re wondering about the crossroads where American blues and Iranian classical music meet. 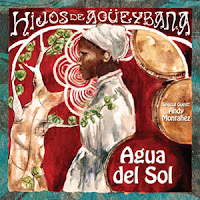 So often we turn to Cuban music when exploring music of the Caribbean and don’t get me wrong, Cuban music possesses splendid qualities, combining the best of Afro-Latin and Spanish music traditions.  Even the Puerto Ricans in New York City turned towards Cuban music when they launched salsa music.  However, now that I’m listening to a traditional recording of Puerto Rican music called bomba by the group Hijos de Agüeybaná (Agua del Sol), I can’t understand why these delicious Afro-Latin dance rhythms haven’t enjoyed the same popularity as Cuban son, even if these rhythms along with Puerto Rican plena and Dominican merengue appear in salsa alongside the Afro-Cuban beats.  To think that my grandmother might have danced to bomba when she was a child growing up in Puerto Rico, warms my heart.


With the call and response vocals, especially on the titular track, I bet there are listeners who would confuse bomba with Cuban son.  Te Invito could be mistaken for Calypso, and Ven Ven and No me dejes solo for Cuban rumba of Santaría (a religion that combines Christian saints with Yoruba gods).  To confuse matters further, the musicians combine bomba with salsa and jazz on this recording.  If you’re looking for drum-centered music with call & response vocals that cause your hips to move against your will, pick up this recording.  Learn a new dance--Agua del Sol is available on September 25.