In review--Conversation with a Cello 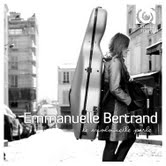 
Celebrated French cellist Emmanuelle Bertrand tackles challenging works by Benjamin Britten (1913-1976), Catalan Gaspar Cassadò (1897-1966), her partner, pianist-composer Pascal Amoyel (1971), and Hungarian Zoltàn Kodály on her ambitious Le Violoncelle parle.  While you can view the French cellist contorting her body and face performing this masterwork on the DVD portion of the album, she also contorts the concept of the language of music. On both the CD and DVD, she emphasizes the language of the cello itself.  The back of the CD cover reads, “When music takes over the idioms characteristics of each culture, pushing back the limits of the instrumental technique, reshaping, and dismantling the rules to better express a specific identity…” The cultural identities the cello expresses here range from the hope and despair of Holocaust musician survivors (how music uplifted them), Hungarian and Russian folksongs, and Catalan dances. The results prove challenging to the listener, but I’m sure not as challenging as to the cellist, who receives a physical and mental workout.


I don’t normally listen to 20th century European classical music, at least not the more melancholic compositions.  But Bertrand’s performance on this recording is breathtaking, if not exasperating at times.  The musician offers her courage to her instrument causing her cello to grown, gasp, join a folk dance, and sing like a Hungarian gypsy violin.  Imagine a cellist up for this type of challenge that takes the mind, body, and soul to both dark and transcendental places, while bringing listeners along on an intriguing journey.  While I find all the pieces worthy of my undivided attention, I enjoy Cassadò’s Suite for solo violoncello the most, perhaps it’s the Catalan dances that grab my attention.  Certainly this is the most uplifting work on the recording.  Most of the work here, even with Russian and Hungarian folk motifs falls on the heavier side.  While it doesn’t plod along, it places listeners in a contemplative mood then alternates in unusual flights.


The music is too complex for relaxing. And you can’t work with this music playing in the background.  So the only solution is to listen to it and drink in its many influences.  Allow yourself to engage in the conversation with the international cello and in the process gain exposure to Russian, Spanish, and Hungarian folk idioms.  Then watch the DVD documentary which gives a whole new life to the music presented here.  Join the musical conversation which includes beyond the Catalan cello suite, Britten's Suite for violoncello no. 3, op. 87, Pascal Amoyel's Itinerance, adn Kodaly's Suite for solo violoncello op. 8.


http://www.harmoniamundi.com and visit Emmanuelle’s interactive site at http://www.emmanuellebertrand.com
Posted by Moon Child at 5:16 PM No comments: