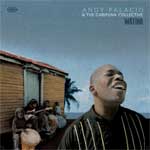 Only in his 40s, the musician and preserver of Garifuna culture, Andy Palacio died recently of a stroke. It's true musicians have been dropping like flies lately, with so many passing away from pneumonia, strokes, heart attacks and cancer. In the last couple of days, Cape Verdian vocalist Cesaria Evora suffered a stroke, right before she was going to headline at the WOMAD festival in Australia. (She is still alive).

While the death of a musician to me is always tragic, Palacio's passing on hit both the global music community and the Garifuna peoples of Belize (and beyond), like a ton of bricks falling out of the sky. In a way, you might say that Palacio's journey into preserving Garifuna culture goes back to 1635 when shipwrecked African slaves liberated themselves and found solace on the Caribbean island, St. Vincent. There the African slaves were welcomed by the Arawak Indians and the Garifuna culture was born.

These "Black Caribs" eventually landed in Central America (Belize, Honduras, Nicaragua and Guatemala), but only through more tragic events. Today, according to the liner notes of the CD Watina, "there are roughly 250,000 Garifuna in the world, including immigrant communities in Los Angeles, New York, Chicago and Miami." So are you asking yourself why you have not heard of this culture or its music until recently, or possibly until now?

The culture, language and music that Palacio learned as a child was disappearing until Palacio embarked on a mission that eventually led to the production of Watina. When Palacio was 18 he traveled to Nicaragua to help with a literacy program and fortuitous events led to him meeting an elderly man who thought that he was the last link to the Garifuna language.

According to the liner notes, "The elder couldn't believe his ears when he heard the young Palacio greet him in Garifuna, crying out, 'Are you telling the truth?' Andy replied, 'yes, uncle; I am Garifuna just like you,' and the man embraced him and would not let go."

On the recording Watina, we might think we are listening to West African music. Palacio's voice sounds like griot flights. The music on this disc also sound Caribbean, and while listening to the songs here, I imagine the sea, surf and sand. I can see the little thatch hut where the album was recorded with the sea rolling in and out, sending out happy vibrations to those folks in far off parts of the world. After all, the sea played a huge role in the shaping of the Garifuna people and also in shaping the destiny of Palacio's life.

Watina feels right at home with Cuban son, reggae, West African music and other Caribbean music. However, in comparison to other Caribbean music traditions, Garifuna rhythms are gentle, flowing, and warm. The music here does not hit anyone over the head, nor does it scream out language and culture preservation project. Upon listening to this music, we would applaud Palacio and the other musicians that made this all possible, that we would hear a music, language and culture that might have perished under the threat of globalization and homogenisation. (Music is not milk, but the music industry sometimes sanitizes music from other cultures so that its friendlier to pop culture ears).

While Andy is no longer among the earth-based music community, his work lives on; his determination and passion to preserve the ways of his people have become legacy. And we need to ask ourselves, "what exactly are we doing with our lives? Will we leave a legacy behind when our time comes to leave this world?" In that light, Palacio's life and death does not appear to be a tragedy at all; at least not if we get the message his life bestowed on us. And not if we commit to preserving another piece of humanity. God-Goddess bless musicians whose lives extends out far beyond their egos, and into the community-at-large.

worldmusiccentral.org/article.php/andy_palacio_funeral_and_tribute_concert
Posted by Moon Child at 4:51 PM No comments:

Gazpacho reminds me of a scene from Pedro Almodovar's "Women on the Verge of a Nervous Breakdown," where the most crazed woman of them all splashes a bowl of gazpacho on the lead character. Tomato, garlic and remnants of sleeping pills run down the face of the woman and soak her dress. This is one side of Spain, (over-the-top characters), via the movie business that has shaped my life, along with hearing fiery flamenco guitar and vocals. My ancestral DNA goes on alert and my heart feels energized when I hear sounds of Andalusia.

So I am delighted to have received two flamenco recordings recently. The first recording I am going to mention, Flamenco De Vuelta E Ida hails from the New York based, Gazpacho Andalù. This fusion project blends music from North Africa, Southern Spain with Hispanic American influences. If you take a listen to track 3, Baile De La Reja, you will hear flamenco flute, along with Carmen Salado on vocals, and that fiery flamenco guitar I mentioned earlier. The following track, No Encuentro Tu Pasiòn begins with a jazz drum solo, and then marries Caribbean and North African rhythms and yet, it still feels like a flamenco piece.

I find this CD passionate throughout with some nice twists and turns that keep the musicians on their toes. The only surprise I did not care much for was the appearance of an electric guitar on track 7. I was editing a novel while listening to the CD and that guitar just felt jarring to me. Other than that, Alfonso Cid, Arturo Martìnez, Gary Raheb, Antonio De Vivo and Jainardo Batista deliver some gorgeous flamenco, worthy of a cinematic moment. And they have found a saner use for gazpacho than

I learned about the Spanish composer Isaac Albeniz only a couple of years ago, and I heard one of his suites from "Suite Iberia" performed on piano and cello (by Norwegian musicians nonetheless). At that time I was introduced to several Spanish classical composers, who no one told me about prior because no one in my family even knew about them. And the history of western music class that I took at college also did not mention any Spanish classical composers. On one hand, I felt slighted by this omission of music history and on the other hand, I was delighted to discover Isaac Albeniz's Suites, which paint a more vibrant picture of Spain than Miles Davis' "Sketches of Spain" or any other musical project I heard celebrating Spain.

Well, music lovers only hearing Suite Iberia for the first time on flamenco guitarist Juan Manuel Cañizare's work for two guitars, Suite Iberia (Albeniz por Cañizares), might be surprised that this work was originally composed for piano. The virtuoso guitarist was up for the challenge of rearranging all 12 suites for two guitars. Then he played both guitars creating a rich sonority that boasts the vibrant colors and rhythms of Andalusia and then some.

"The Catalan musical genius (Albeniz) summarized his creative accomplishments in this magnificent Suite, where 10 of the 12 pieces are inspired by Andalusia." (Liner notes). Also according to the liner notes, Debussy spent his last days playing these suites. And now Cañizares has arranged the suites for two guitars while fusing classical and flamenco guitar. Certainly this is both a classical and a flamenco recording worthy of special attention.

Although this music emits warm embers and soothing tones, it's not meant to be relegated to the background. Plenty of virtuoso guitar playing, not to mention a good use of musical instincts can be heard through the recording. The suites reflect on various moods and paint pictures of sunny Spain in our imaginations. Certainly this recording could act as a starting point to discovering Spain's rich classical and even folkloric musical heritage.

Sony Masterworks
Posted by Moon Child at 3:59 PM No comments: