In review--Singing in the rain 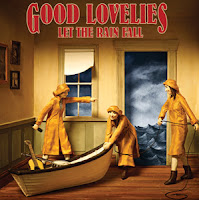 While the US had its sweethearts Doris Day and the Andrew Sisters, Canada presents its own version of the musical girls next door, better known as Good Lovelies.  This trio, like the Wailin’ Jennys, blends their sweet-honeyed voices on songs that swing. But unlike the Wailin’ Jennys, there’s not a prairie in sight. I'm also reminded of the rockabilly group Stray Cats of the 80's.  Good Lovelies perform urban grass songs that portray women getting around a city on bikes, and the simplicities of domestic life on their third album, Let the Rain Fall. With these adorable ditties and toe-tapping tunes, even us poor folks living under rain clouds for 6 months feel uplifted.

The album’s warm production features lap steel, guitar, Wurlitzer (organ), bass, drums, mandolin, and harmonica.  But the instrumentation merely offers a backdrop for the vocal harmonies and the stories featured in each of the songs. While the music feels delightful, the lyrics seem too simplistic at times, even if they exude charm in a Doris Day vein.  And the odd thing is when I listen to this album, Doris Days face glows in my thoughts.  Even the albums title conjures up images of the Hollywood classic, Singing in the Rain.  Love and romance with the domestic woman plays a role here too.  Take a listen to the love song Best I know, or the jaunty ditty Kiss Me in the Kitchen.

Let the Rain could have easily fallen into cloyingly cute territory if it wasn’t for the gorgeous harmonies, foot-tapping melodies, humor, and hearty blue grass swing that fuels this album.  Listen to the groovin' Crabbuckit. I recommend this album to fans of bands featuring female harmonies and of urban grass (bluegrass music by urban musicians). If you have grown tired of living under gloomy clouds, these women will brighten your day with their girl next door smiles and songs about everyday living.

Posted by Moon Child at 5:58 PM No comments: 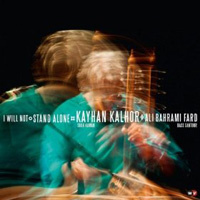 I have a small pile of CDs sitting next to my laptop in which Iranian spike-fiddle player Kayhan Kalhor appears. Since reviewing Ghazal’s Rain on ECM in 2003, in which Kalhor performed in a musical exchange with sitarist Shujaat Husain Khan, I have come across a recording each year featuring Kahlhor in collaborations with Iranian, Turkish, American (Brooklyn Rider, a string quartet and Yo-Yo Ma), and Indian musicians.  And in each of these recordings, the spike fiddle player (aka kamancheh), offers a transcendental performance. If you see Kayhan Kalhor’s name gracing the cover of a CD, make sure you give that recording a good listen.  Otherwise you pass up an opportunity to hear truly exotic music fired by the heart and soul of its performer.

The most recent recording, or musical chapter, I Will Not Stand Alone, brings its listeners a ray of hope, but only after having suffered the torments of the musicians first.  Kalhor recorded this collaboration with bass santour (a dulcimer/zither), player Ali Bahrami Fard during a low point in his life. Violence had broken out in Iran leading the Kalhor  to a dark place.  But in this dark place he composed music based on a Kurdish melody from the Tanbour repertoire, and based on Avaz-e Afshari and Avaz-e Isfahan (traditional music modes). The music runs the gamet from the wailing lament, Hear Me Cry to the playful The Laziest Summer Afternoon and Dancing Under a Walnut Tree, to the defiant title track which closes the album while offering an intense listening experience.

The recording feels languid with tinges of sadness and anguish bursting through.  The bass santour's bell-like tones wed to a new instrument shah kaman (a cross between a spike fiddle and a tarhu with a cello-like sound), that was created by Australian instrument maker Peter Biffin. While the musicians perform at an even-tempo without igniting any musical fireworks, listeners still feel that they are treated to the sounds of master musicians.  On the short piece, Pluck a Star from the Sky, a frenzied  spiked fiddle leads off with the santour shadowing, then the instruments slow down, suspending time.  Feels magical.

The musicians describe the album as bittersweet, which takes a cathartic journey through despair, anguish, nostalgia, until it lands on hope and solidarity radiating from music that brings hearts together. If I had to choose one album to describe the healing power of music from darkness and violence, I Will Stand Alone certainly fits that bill. The musicians aren’t just showing up in a studio recording exotic music for fans of traditional music, but they have offered a gift of transcendence during a time when the planet basks in its darkest shadows.  There’s a time to mourn, a time to come together in a peaceful gathering, and a time to rebuild our communities. I Will Not Stand Alone acts as a musical reminder that millions of like-minded people unite under the moniker of peace in our time.  When it feels like only one of us is standing alone in a room, that one of us is all of us. We never stand alone not with music like this.

http://www.worldvillagemusic.com
Posted by Moon Child at 5:18 PM No comments: 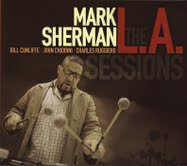 While I have reviewed instrumental recordings featuring an array of instruments Mark Sherman’s The LA Sessions is the first vibraphone album that has ended up in my mailbox. Vibraphones have wonderful resonance that warms up the heart chakra and the be bop jazz classics that appear on this recording certainly provide an uplifting groove.  Sherman’s quartet includes Bill Cunliffe on hammond organ, John Chiodini on guitar, and Charles Ruggiero on drums and this combo's be bop renovations turn heads and get feet tapping.

This uptempo album features songs by Dizzy Gillespie, Charlie Parker, Bud Powell, Miles Davis, Milt Jackson, John Coltrane, Benny Golson, Burke Van Heusen, and one lone track by Sherman.  The album acts as an homage to the musicians who inspired Sherman during his formative years and when at 18 years of age he switched from drums to vibraphone thus launching off an impressive career.  He’s now president of Miles High Records, a label that assists independent musicians via digital media.

Other than spreading good vibrations through four instruments, the musicians used a rare opportunity, studio time at Berkeley Street Studios to express their musical passion--playing these be bop classics, and engaging in a vibrant musical conversation in which there is no double bass in hearing range.  The musicians take turns at the spotlight and remind me of divers taking turns off a diving board.  In this case you hear some brilliant moments that almost take your breath away.

The musicians’ interpretation of Van Heusen’s It Cold Happen To You offers some of those moments.  You can certainly hear Sherman’s dexterity on the vibraphones and the other musicians chipping in brilliant moments.   The musician’s rendition of Celia also offers an excursion down jazz alley.  Far Away floats away on a dream when the musicians slow down the tempo and sensual guitar shows up.

If I had to choose one word to describe this recording it would be “fun”.  The musicians remind me of children exploring the world and in doing so they offer their listeners a respite from everyday life.