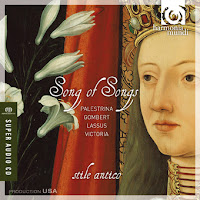 
As I'm writing this review, I'm suffering from a migraine, not to mention, stress from having to re-type this blog entry. In the past, I was able to heal migraines while listening to renaissance polyphony. I'm hoping I will achieve the same results listening to this recording. Suffice to say, I'm having some trouble focusing on the screen at the moment.


I'm pleased that this recording arrived in the mail because I have been searching for music set this famous poem for some time. I've never been a fan of the Bible, having been forced to read it as a teenager. But a few years ago when I was researching Christian saints and Mary Magdalene for a novel I was writing, I encountered The Song of Songs. I wondered why I never encountered the poem as a child. I'm sure I am not alone in this line of thought.

The Song of Songs is a love song that King Solomon composed for his beloved, a young Israelian woman. It predates troubadour songs by hundreds of years. It also mirrors Sufi poetry by the likes of Rumi and Persian poets. Similar to Persian poetry, the text of The Song of Songs, can be interpreted as romantic or sacred love.

It starts off with, "I am a flower of the field and a lily in the valley; as a lily among thorns, so is my beloved among the daughters: a garden fountain and a well of living water, flowing streams from Lebanon."

Stile Antico give a lovely performance of this collection or renaissance polyphony. The choir's repertoire proves quite challenging and offers a sensual listening experience. I'm reminded of the Seattle-based Tudor Choir, which also covered work by Jacob Clemens. Here you have an equal blend of male and female vocals, mostly covering the high lofty end.

This impressive recording provides Early Music listening pleasure, and possibly a cure for a headache, if I could only get away from this laptop. The verdict is still out on that one. Stile Antico has recorded two other albums with Harmonia Mundi, certainly worth checking out.


Harmonia Mundi
Posted by Moon Child at 10:27 AM No comments: 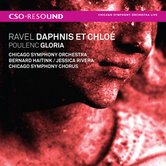 It’s odd to find a requiem and an Impressionist ballet sharing the same disc. However, Francis Poulenc’s Gloria, with its fanfare, and Copeland-esqe orchestration, not to mention vocal arrangement, hardly resembles a requiem—at least not the kind we have grown accustom. The liner notes mention that Poulenc, (“a bad boy of French music”), composed the requiem for a fellow composer, Pierre-Octave Ferroud who was beheaded in an automobile accident.

Also in the liner notes, “Over the next 25 years, as Poulenc examined his own beliefs and confronted the Roman Catholicism of his childhood, he developed a unique religious musical style, one that confirms and, in turn questions the significance of faith.”

The six movements are cited as both “introspective and breezy.” And the soprano role performed by opera vocalist Jessica Rivera (on this Chicago Symphony Orchestra disc), certainly augments the splendid qualities of this modern-sounding requiem. And yes, Gloria dovetails nicely with Maurice Ravel’s Impressionist ballet, Daphnis et Chloe, which in itself, provides its listeners with gorgeous orchestration while also revisiting some of Ravel’s other works, such as Rapsodie espagnole, (listen to the Spanish like runs that end with cymbal crashes).

It seems that both Poulenc and Ravel enjoyed their share of controversy, as composers and otherwise. Although Ravel claimed not to be religious, and if he explored any type of spirituality, he most likely dabbled in paganism. (At least that is the conclusion I came to after reading biographies on the composer). The ancient Greek story of Daphnis and Chloe certainly wove its pagan themes with the god Pan playing a central role (he saves the heroine Chloe).

The ballet, originally commissioned by the Russian Sergei Diaghilev, conducted by Michel Fokin and choreographed by Leon Bakst, stirred up its share of tension between key players, and controversy due to its overt pagan themes. Ravel was not accustomed to composing ballet scores and the dancers complained about the challenging time signature. Yet, in a similar vein to Stravinsky’s Rites of Spring and Debussy’s Prelude to the Afternoon of the Faun, this radical ballet score sounds pleasing the ears.

Swirling flutes, plucked harps, horn fanfare, crashing of cymbals and a wordless choir create an otherworldly atmosphere. I do not know enough about ballet and choreography to know the effectiveness of this ballet score, but as a symphonic work, Daphnis and Chloe has been recorded and performed by several renowned symphonies. The ballet is rarely performed these days, but fortunately, the Northwest Ballet Theatre (Bellingham, Washington), has included it in its repertoire.

The Chicago Symphony Orchestra’s recording of Poulenc’s Gloria and Ravel’s Daphnis et Chloe offers a pleasurable and relaxing listen. The only problem with Ravel’s ballet is that it is too quiet at times and I must wear headphones to experience its full effect. Quiet flute, harp and string passages give way to brass fanfare and cymbals. CSO captures the essence of this work and so far this is the best recording I have heard of Ravel’s ballet score. Poulenc and his requiem Gloria are new to my ears so my only comment is that I find it moving and gorgeous. I wish more requiems celebrated life in the same way as Poulenc's work.

I highly recommend the CSO recording. And if you wish to delve further, check out the resourceful liner notes. And also Chicago Symphony Orchestra at http://www.cso.org/ distributed by Harmonia Mundi at http://www.harmoniamundi.com/
Posted by Moon Child at 11:11 AM No comments: