A big thank you to Dana D. for the WME logo

You might have noticed that Whole Music Experience now has a logo.  Dana Dryg of Bellingham designed the logo for the blog.

I hope you like it.
Posted by Moon Child at 9:56 AM No comments: 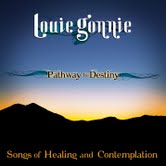 
Native American traditional singer Louie Gonnie’s latest CD Pathway to Destiny begs to be listened to outdoors and near a body of water.  My intuition told met to take my portable player to the park and listen to Gonnie’s harmonized songs near the bay.  While I have not done this yet, I recommend this practice for anyone listening to this recording.  I tried to listen to the recording on my computer and it just didn’t make sense, given the titles and intent of the 14 prayer songs.  No, this recording begs for an outdoor listening experience.


Gonnie pays homage to the natural world and the spirits that reside in this world.  He sings in a voice that ranges from bass to high baritone, while harmonizing with his own vocals.  If you listen to the recording through headphones, the reverb behind the vocals might conjure someone singing in a deep cave.  Personally, I envisioned Gonnie singing in the canyons of Arizona from where this recording hails.  I have listened to several of Gonnie’s recordings over the years, and I respect the integrity and love the musician brings to each recording.  On one recording, he sang about four mountains from the four directions, in other recordings he also connected deeply to the natural world with reverence.


My favorite track on the recording is the closing spoken word piece, Swirling Smoke which features Anthony Wakeman on Native American flute and the vocal trio Alex  E. Smith, Cheevers Toppah and Nitanis Largo.  But pick any song on the recording for your walk with nature and you’ll feel the peace that Gonnie’s recording radiates.

Posted by Moon Child at 4:21 PM No comments: 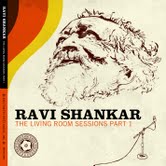 It’s not every weekend I get to sit down and listen to new ragas performed by a 91-year old master musician.  Pandit Ravi Shankar turns 92 this month and his raga performances sound equally fiery as they do thoughtful and tender.  The master Indian classical musician gives the impression in his liner notes that The Living Room Sessions was a casual get-together with his friend tabla player Tanmoy Bose, but even one listen to this recording and we can hear the formalities of the Indian classical music tradition shining forth. “This rather a different recording when, at almost 92-years, I was fooling around at home in Encinitas.”

Also in the liner notes, “...Raga Malgunji has both a slow Vilambit gat and a display in Jhaptal of ten beats in complicated, rhythmic patterns and finishes that conveys sadness the sadness of not being able to merge with the Supreme.”  The result of this recording is not that of a casual jam session, but of a musician who has mastered his sitar and emotions to the point that he can pull out several emotions for a single raga--an amazing fete.  I'm impressed.  I listen to these ragas and I nearly fall out of my seat from astonishment.  Not that I should feel astonished since I have heard Ravi Shankar’s ragas on numerous occasions and I'm always moved by them.  However, the critical part of my brain completely shuts off when it relaxes to this beautiful and spirited music.

The Living Room Sessions includes 4 of the 7 ragas that were recorded in Shankar’s Californian home last fall.  The first Raga Malgunji is the most soulful of the 4 performed with tenderness and maturity bordering on sage wisdom.  Similar to the closing track, Raga Satyajit (a raga composed for the late Indian filmmaker Satyajit Ray), portrays a meditative and contemplative mood.  In fact, I made the mistake of lying down when I listened to the closing track and I fell asleep.  The sleep felt healing.   What I didn’t notice the first time I listened to the last raga was that at around 8 minutes into the raga, the tempo picks up with the sitar continuing the call and response of the main theme and Bose’s tabla contributing a gentle pulse throughout.

Raga Khamaj and Raga Kedara represent the lighter and more playful thumri.  You can almost hear a smirk playing upon Ravi Shankar’s lips as he plays these spritely ragas.  The playful ragas contrasts nicely with the tinges of melancholy present in the other ragas.  If the point was to achieve an emotional balance on this recording, the musicians succeeded.  I was expecting this recording to blow me away and the musicians met my expectations and then some.  If you’re not a fan of Ravi Shankar yet, you will be after listening to The Living Room Sessions, Part 1.

http://www.eastmeetswestmusic.com, http://www.harmoniamundi.com
Posted by Moon Child at 11:51 AM No comments: 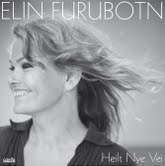 When I hear the term Norwegian folk music, I usually think of traditional Norwegian music heavy on the hardanger fiddle and medieval folk ballads.  However, Norwegian folk can also refer to singer-songwriters such as Kari Bremnes, a Norwegian musical star, or so many others ranging from 20-years-of-age to well beyond that.  Elin Furubotn follows in the tradition of folk-fusion.  She composes more subtle tunes that range from jazz to folk to rock (the title track) on her album New Path.  She possesses a good ear for melodies that she sings in a near-whisper.   However, don’t be fooled by the softer timbre of Furubotn’s vocals, since she appears passionate about the themes that appear in each of her songs.

I admit that it took me a few listens before New Path grew on me.  While I have heard many recordings graced with Norwegian vocals over the years, for some reason, I was having a difficult time latching on to this recording.  On one hand, I understood the melodies, and I could relate to the English translation of the lyrics, but on the other hand, after listening to too many CDs lately sung in languages unfamiliar to me, I needed to hear strong melodies sung in English.  However, I am over that now.

Today I listened to the CD again and perhaps the shining blue skies outside helped me to relate better to the songs.  The third track, I See You Looking, caught my attention.  The song represents soothing jazz with saxophone and vocals engaging in a subtle conversation.  Furubotn’s vocals arc over plaintive saxophone on the chorus.  This single line stands out from the song, “Winds of redemption will blow caressing me as I go.”  The song Doubt features jaunty percussion and guitar that stands out on the album because of its uniqueness.  However, the true standout on New Path is the final song, Silence, a duet sung a cappella.  The cheeky You Know Damn Well Why I’m Upset combines folk guitar with jazz saxophone and was based on a cafe conversation that Furubotn overheard--a couple squabble.  In my opinion, the recording takes several listens before sinking in, but then you’ll discover some thing you can relate to among these intimate songs.

http://www.ozellamusic.com
Posted by Moon Child at 12:00 PM No comments: