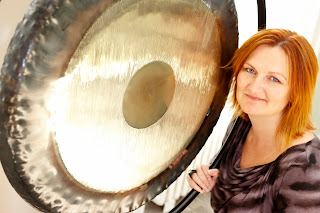 Toning into the Realm of Weightlessness

Purposeful and intentional sound/music just took on a new meaning for me. Lyz Cooper (researcher/musician/teacher/sound therapist), combines psychoacoustics and music therapy to create sound therapy-with the difference coming from designing intentional sound recordings for the purpose of relaxation, changing brain patterns, and healing the mind-body-spirit.

Cooper teaches at the British Academy of Sound Therapy, has penned two books exploring the healing power of sound, has produced sound therapy recordings, and she collaborated with Radox Spa and the ambient music band Marconi Union on the popular relaxation piece, Weightless (see video at the bottom of post). She is also a regular contributor to the Musical Healers group on Linked In (an intimate 600 member group that discussing the frontier of music vibration).

Whole Music Experience: Who were your mentors and or inspiration for doing sound healing work?

Lyz Cooper:  Two people I was doing some PR work for - a woman called Surya who ran drum circles and a man called Gandiva who worked with the gong, were my first contact with the therapeutic power of sound, but it wasn’t until a while later that I considered sound healing for myself. Looking back I believe that Surya and Gandiva ignited sparks in my subconscious and I am grateful to them for that. Michael Ormiston and Rollin Rachelle were the first overtone singers I ever experienced and both blew me away! Although they were approaching their art more from a musical angle at the time I could feel the energy moving in my body and so they also ignited a spark.

Sadly I didn’t have any mentors in the early days but lots of people over the years have inspired me and continue to do so as I read about their work and research. My students inspire me as they tell me about the wonderful results they are having.

WME: I noticed two recordings of yours listed on your website (Emergence and Chakra Balance). Are these recordings based on your compositions or are they collaborations such as with the piece “Weightless” for the Radox Spa?

LC: Chakra Balance is mainly my composition but I also received input from my business partner at that time, Anne Fleming as well as the guys in the studio, and Al Grandy on keys was a great help. Emergence is a collaboration with my group, Soundscapes comprising Lianne Fagon, Clifford Sax and myself.

WME: Speaking of “Weightless,” I listened to it on YouTube and I did notice my otherwise super tense body relaxing. You employed several techniques such as including an abstract melody, a repeatable rhythm at 60 beats per minute, slowing to 50 beats, low tones, musical intervals such as the perfect 5th and octave as well as, an ancient musical scale.

How did this collaboration with the Radox Spa and the ambient group Marconi Union come about? What was the process like of working with the musicians on this relaxing piece?

LC: It is wonderful that you found Weightless relaxing.

I was contacted by Radox’s PR company asked if I would collaborate so I said yes. To be honest, I would have rather composed the piece myself but Marconi Union was already in place for this project so that was OK.

I had a meeting with Marconi Union, their agent and music label, and Radoxs’ PR company and told Marconi Union what ‘sonic vitamins’ (as I call them), to use.  They came back with a couple of pieces and I sat and ‘tuned in’ to each piece, choosing the best version which we then discussed and tweaked a few times until it was ready.  It them went to Mindlab for testing and then was officially launched. See (insert YouTube link) for the making of Weightless. The process was an interesting one at first they were not as open to the process and took the micky a bit, but one band member, Richard, was quite interested and we had a few conversations.  Now they are much more open and I believe have launched an album based on the properties of the original Weightless piece we created together.

My company, MindMu concentrate on what we call ‘consciously designed music’.  I acknowledge that is a grey area because one could say that many composers design music consciously, but I guess what we are saying when we use this term is that we are consciously employing certain methods that are known to have an effect on the body and mind. We hope to be launching more pieces soon.

WME: You also published a book on sound healing with daily exercises called Sounding the Mind of God. Tell me about the premise of the book, when it was originally published and the public’s response to it?

LC: Sounding the Mind of God was launched in 2009 in English and in 2010 in German.  The aim of the book was to demystify the ancient art of therapeutic sound and to present my method, which I guess you could call more ‘sound therapy’ than ‘sound healing’.  Although there is some cross-pollination of the two approaches, my personal definition is that sound healing is the effect that sound has on the system regardless - ‘passively’, if you like.  Sound therapy is the reflective element – it is the individual’s exploration of the sound as it interacts with them and the meaning they derive from this interaction.

I am fascinated about knowing as much as I can about how and why things work and I love research.  I saw Sounding the Mind of God as a way to bring together lots of different research, opinions, and views to help explain how and why sound can be such a powerful therapeutic tool.  I also wanted to bring the written word to life by giving lots of different exercises that people could do to help to feel the effect of the sound. This is the proof of the pudding, if you like.
I have had a really good response to the book, so much so that it was translated into German the following year and is also on Kindle.  Although my work and research has moved on now, I continue to get emails from people that have received clarity about how sound can be therapeutic, as well as benefit from using the exercises in the book.

I am currently working on my second book, What is Sound Healing which is due out in February 2016.

WME: If you haven’t already covered this with the first question, I’m interested in how you applied sound healing to recover from a life-limiting illness as you refer to it on your website?

As I mentioned in question one, I had done some PR work for a couple of people working with sound and music so it was in my consciousness.  I had been very ill and had left my job in advertising during which time I began using my voice, scanning my system, and toning into certain areas, changing the pitch until I felt that it was helping me. I began to feel the benefit almost straight away. When I was well enough to go out of the house, I purchased a singing bowl and noticed that it had a slightly different effect.

This was when I knew that something very special was happening and that I needed to know more. I continued to use the voice, breath, visualization and the singing bowls for a while and started developing techniques based on these methods. I then began to look for other tools to work with and travelled a lot, working with indigenous people and teachers.  Twenty years later I have added crystal bowls, drums, mantra, tuning forks and gong to my repertoire and teach a range of courses in 1-2-1 and community sound and voice therapy at The British Academy of Sound Therapy.

I am also continuing to research and develop my techniques. My latest piece of research concentrated on the therapeutic application of sound induced altered states of consciousness for my MSc in Applied Music Psychology.  The results of this research will be available shortly.

Video featuring the production of Weightless.