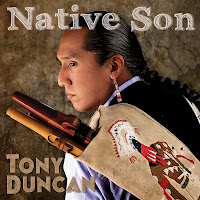 I had one of those days where I feel wound up and it doesn’t help that I have been consuming raw chocolate.  So listening to Apache/Mandan-Hidatsa-Arikara flutist Tony Duncan’s third album with Canyon Records and I believe his second solo album, Native Son, comes as a relaxing godsend.  When you listen to numerous Native American flute recordings you begin to identify subtle and not so subtle differences and signatures of the many gifted flutists.  Some Native American flutists possess playfulness while others lean heavily into the ethereal realm and others provoke healing tears to flow.  Duncan combines all of those qualities in his playing, which if it was a wine, we would also call it full bodied and robust--not bad for a young musician.

I survived a stressful summer in 2011 in part listening to Estan-Bah (acoustic guitar, Native American flute, Native American frame drum), and experiencing the album, From Where the Sun Rises as healing.  Duncan plays from the depth of his soul and perhaps that is where the healing comes from--breath and heartbeat.  Beside the River gives us a good example of a healing song and I can see someone relaxing on a massage table while this song plays softly in the background.  Eagle Has Blessed Us represents an example of a playful song with its trills followed by elongated notes.  It too soars and glides in the clouds.  Picking up the pace, Quail Dancers also wants to play with us.  And similar to R. Carlos Nakai, Duncan also performs the infamous Amazing Grace on solo Native American flute, but a different interpretation of the religious hymn.

I would say more, but I rather you pick up the album and experience the flute songs yourself.  There are only so many words to describe music and I think in my 25+ years reviewing recordings, I have already used up those words.  Now, it's your turn.