In review--Sunny Music from the Greek Isles 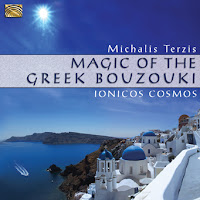 For those of us who don’t live in, travel to Greece or come from Greek origin probably only hear traditional Greek music while eating at a Greek restaurant or as the soundtrack for the comedy movie, My Fat Greek Wedding.  People of a certain age will also recall the soundtracks from the movies Zorba the Greek and Never on a Sunday (two must-see classics).  Greek music comes in two emotions for the most part, desperately tragic as in rembetika and exuberant as in Greek dance or feasting songs.

While I enjoy Greek vocal music, instrumental music with its bouzouki, baglamas (Turkish instrument), lutes, zither, mandolins, guitar, piano, bass, percussion sound invigorating or just plain haunting depending on the song.  However, I think most non-Greeks will conjure thought of Greek wedding music or the lively circle dance songs.  We think of sunny islands, the sea, sand, and rich food.  However, stuffed grape leaves aside, I prefer the music over all the other Greek cultural experiences.  This music provides fodder for imagination as we visualize ourselves strolling among Greek ruins on a remote island and it helps the rich food go down more easily (this isn’t a scientific observation).

Michalis Terzis, who is no stranger to traditional or popular Greek music, rounded up an ensemble of younger musicians on traditional acoustic instruments that provide us zing and zest.  The tracks range from quick tempo circle dance such as the opener Chasapiko Politiko and the Dance from Aivalí to melancholic love song, Sto’pa kai sto xanaleo with its cello, lutes and violin.  The invigorating Emvatirio Smirnis (March of Smyrna,) resembles cartoon music in comparison as it bounces along without a care in the world.  The last track, Tatavla-Chasaposerviko, another circle dance features the Greek zither, santouri along with double bass, classical guitar, traditional lutes, bouzoukis, baglamas and piano and it closes the recording with a flourish. The musicians bring us traditional songs from different regions of Greece while offering us a sunny respite from the world.  (The CD booklet provides cultural notes for each track).