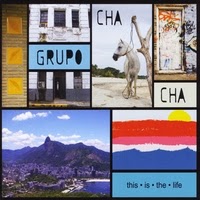 World/Latin
Grupo Cha Cha
This is the Life
Independent

Mixed Latin music bands have caught my attention in recent years, including Seattle’s Picoso (with women horn players) and now, Grupo Cha Cha from Chicago which performs flute-centered Caribbean and Brazilian dance music.  This is the Life opens with Charlie Otwell’s Peruchin which ripples with passion.  Flutist Lise Gilly (band leader) radiates on this track, with tight Afro-Latin percussion, salsa-piano (Darwin Noguera), and the other musicians creating luscious grooves.  Anyone who fancies Latin music will gravitate towards this independent release and why not support independent musicians?

The title track recalls Cal Tjader and Havana Flute Summit which falls in neatly into Latin jazz with Victor Garcia soloing on trumpet and Adrian Ruiz on electric piano (organ).  The musicians shift rhythmically three quarters of the way with the flute taking the lead.  On Que Te Pedi the musicians take a respite and slow way down on this bolero with Diana Mosquera deftly handling vocals. The harmonies on the chorus stun, then at the halfway mark the band introduces a slow salsa groove with a heady flute solo.

On Vamos A La Playa (Go to the Beach) shifts back into an upbeat mood and no doubt the musicians have the dance floor alive with salsa dancers.  As I stare out my window of my northwest Washington apartment I see only gray clouds and I would love to go to the beach and watch colorful salsa dancers dancing on the sand.  Well, at least I have this delightful song to drive my imagination.  After the musicians visit diverse Latin music styles, they end the recording with a Cuban-Yoruba chant, Elegua with Cuban rumba beats, but it doesn’t end there because once again, the band kicks up the intensity.

http://www.grupochacha.com
Posted by Moon Child at 9:30 AM